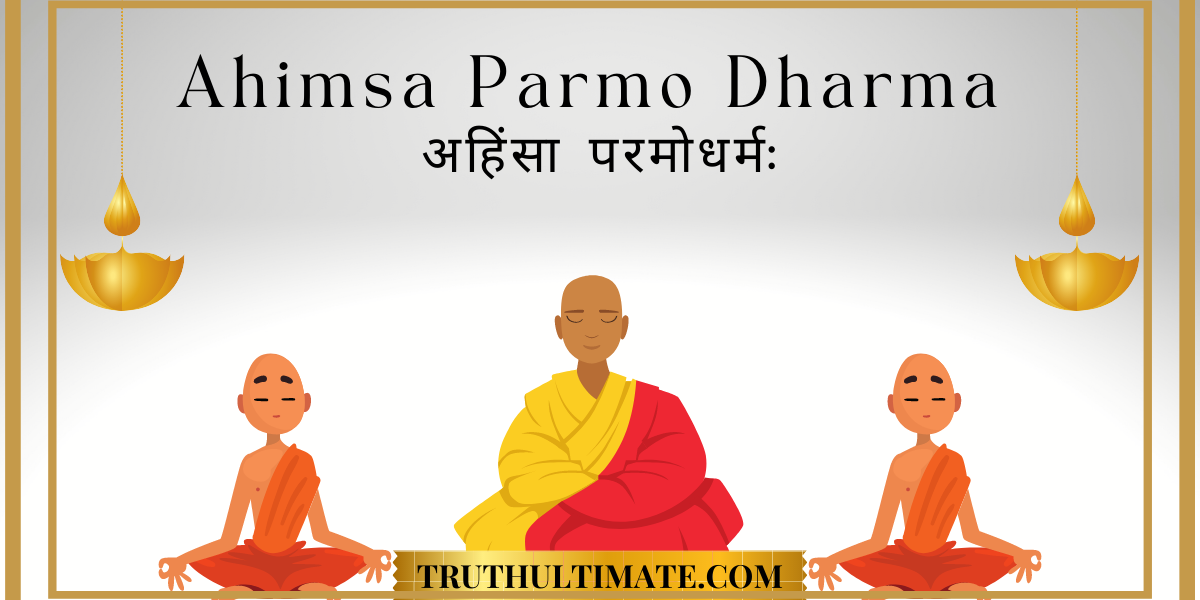 Ahimsa Paramo Dharma is a phrase from Sanskrit that found its popularity through the hands of great personalities i.e, Lord Buddha, Lord Mahavira, Mahatma Gandhi, and since then, it has been used by several world leaders of the world. Mahatma Gandhi made use of this phrase to demonstrate a sense of universal non-belligerence or ‘ahimsa’ in Sanskrit.

The term Ahimsa dates back to the times of ancient India even though it was not formally introduced back then. The concept of Ahimsa Paramo Dharma was present in different themes but never did occur clearly until Mahabharat. Indian religions Buddhism and Jainism are strong preachers of the ideology of Ahimsa Paramo Dharma and have strict rules and policies regarding its abstentions.

The brilliance of this concept is that even though its origin dates back to ancient times but it is still relevant to all the problems that the world is facing today. Ahimsa promotes equality and love and these are the virtues that the world is starving with. It can be seen from the various quotes, scriptures, and the logo of Ahimsa Paramo Dharma that how a simple act of kindness from each person can affect the world in a positive way.

What is Ahimsa Paramo Dharma?

According to the translations, ‘ahimsa’ means non-violence, and ‘paramo’ means supreme or primary. Whereas, ‘dharma’ means duty. Thus, the entire Sanskrit phrase means to say that non-violence is the supreme dharma of all beings. The extent of non-violence being supreme is such that it exceeds every other duty of human beings.

People who follow this principle are non-violent and for them ‘ahimsa’ is a permanent quality. There is no case in their lives or matters of lives where they can practice or allow violence. This permanent inclusion of Ahimsa Paramo Dharma in their personalities makes them unconditional and unilaterally allergic to violence.

However, a very important thing to realize is that the concept of Ahimsa Parama Dharma is relative. The complete meaning of this phrase can be understood with the help of Mahabharata where the second part of this phrase is also present. The second part says that violence is only allowed if it is a practice to prevent and implement a person’s duty. In both of these phrases, dharma is used in the sense of ascetics.

People who practice ascetics are not in favor of defending themselves because they believe in the life of the soul, rather than the life of a human body. The second line of the phrase is not of their interest and is not considered by those who are the real practicing followers of ‘ahimsa’ and ‘dharma’. According to the teachings of Buddha and Hinduism, a Sannyasin should not attempt to defend himself even if inflicted by danger to life because real life is for the soul.

Ahimsa is a very old concept that has been present in the teachings of Hinduism for ages. It was evolved as a concept of ethics and manners in the Vedic texts. The teachings present in Vedic texts did not have this concept as the phrase how it is known today, rather, it was presented as an ideology and no special emphasis was made over it.

The term Ahimsa could be seen in the texts of Taittiriya Shakha of the Yajurveda where it was used to demonstrate a sense of peace only to prevent injuries. The concept of Ahimsa developed in the late Vedic Era, however, it was also seen as a concept of non-violence towards the animals in Kapisthala Katha Samhita of the Yajurveda.

For example, Mahaprasthanika Parva contains the following verse in Sanskrit:

The passage given above is from Mahabharat and it demonstrates the importance of ‘ahimsa’ or ‘non-violence’.

Some other mentions of the phrase Ahimsa Paramo Dharma can be found in the writings of Adi Parva, Vana Parva, and Anushasana Parva where the ideology can be seen reflecting its true meaning.

Another very important source of Hinduism that contains indirect ideas about this concept is the Bhagavad Gita. Bhagavad Gita helps develop an understanding of the second part of the phrase of the concept where it talks about the practices that should and can be adopted in case of violence for self-defense.

This concept about lawful violence in the Bhagavad Gita is not very prevalent among the people who practice ‘ahimsa’ regardless of the situation. They have perceived this ideology as violence against one’s nature and desires, or self-control.

The following text is taken from the part where Rishi Sahasrapat is telling Rishi Ruru about the true qualities of a Brahamana and this part is a narration of this situation done by Sauti Muni:

Vana Parva is a narration done by Markandya Muni about a discussion that took place between Kausika a Brahamana, and Dharmavyadha a person from Mithila. The discussion took place as a result of Kausika’s question where he asks the person about what is true righteous deportment. As a result, Dharmavyadha stated:

In the events of Anusasana Parva, Lord Krishna instructed Yudhisthira to ask questions from Bhishma as it might have been the last chance to do so. As a result, Yudhisthira stated that he was told by Bhishma about ahimsa paramo dharma. Bhishma told Yudhisthira that:

“Thou hast told it many times that abstention from injury is the highest religion. In Sraddhas, however, that are performed in honor of the Pitris, persons for their own good should make offerings of diverse kinds of meat.”

The above situation and conversation were a result of Yudhisthira asking Bhishma about Sraddha (an event where animal meat is offered to honor the ancestral beings).

In Mahabharat, ahimsa is demonstrated to prevent the killing of innocent animals even if it is intended to offer sacrificial meat in the path of religion. Bhishma, very clearly states that one should refrain from killing animals for their flesh and how one should try to be a vegetarian to practice ‘ahimsa’ with the life of animals.

Ahimsa Paramo Dharma has a single meaning of non-violence, but it has different understandings and conclusions in different religious categories of Hinduism. Jainism, however, is the only religion that has the most sweeping, conscientious, and broad understanding of the concept of Ahimsa Paramo Dharma. It simply says that killing any living being just for the sake of urge is himsa (injury) and to withhold oneself from doing so is ahimsa (non-injury).

The practice and inclusion of the pledge of ahimsa are one of the primary pledges of Jainism. The practice of Ahimsa has different restrictions for different religious classes in Jainism. For example, sravakas (people who have taken smaller vows) have more flexible boundaries as compared to the Jain monks who have taken the Mahavrata (great vows). The slogan Ahimsa Paramo Dharma can be seen inscribed on the walls of the Jain temples which shows their significance in the religion.

The idea of Ahimsa Paramo Dharma in Jainism is subjected to several characteristics. The killing of animals for sacrifices or the sake of food is strictly prohibited and does not allow any exceptions. Also, the people of the Jain religion are very careful about injuring plants as they never intend to do so unless a very strict situation arises where they are left with no other options. However, since they promote vegetarianism it becomes essential to eat plants for the sake of human survival. But, even being a vegetarian in Jainism has strict rules to it to make Ahimsa a practice as much as possible with plants.

The extent to which Ahimsa Paramo Dharma is practiced in Jainism can be realized from the fact that Jain monks and nuns would do anything to even protect insects and small creatures from harm. Also, the practicing people of Jainism and the preachers are against the use of alcohol, fish, and honey as they believe that the production of these elements somehow imposes a threat to the large or small forms of life.

Jaina scholars have always debated various forms and matters of life from the perspective of Ahimsa Paramo Dharma. A Jainism scholar forbids its people from agriculture and from the trade-in of products that are produced from animal sources as they can somehow cause himsa to the lifeforms. The reason why Jains withhold from farming and agriculture is that they believe that the process of farming involves the use of chemicals that cause the loss of life for insects and worms which is himsa.

The teachings of Jainism regarding the situations of war are different from any other religion in the light of Ahimsa. The frugal community of Jainism, Sadhu, and Sadhvi, favor the practice of getting killed over the practice of killing. They preach that if faced by an attacker, one should offer their life rather than killing the attacker in self-defense because they believe that eternity lies in the soul of a person and not his body.

It can be seen in the historical scriptures of Jainism of the 10th century when a king gets ready for war and is being taught by the Jain spiritual teacher how he should favor non-violence in respect to violence. Also, near the 12th century, CE Jainism faced a terrible series of temple destructions, raids, communal slaughter, and violent attacks on ascetics. Even in such harsh times, Jain scholars kept the supremacy of their first vow which is related to ahimsa, and the rejection of himsa in all situations.

The logo of the ideology Ahimsa Paramo Dharma very clearly reflects the primary message of this ideology, non-violence. The logo of ahimsa paramo dharma is coherent because it shows a cow and a lion standing together near a wheel. Both of these animals have a significant rank in the Hindu religion.

In the logo, it is seen that both the animals are standing together which is nearly impossible in the real world because a lion will always be on the lookout to hunt the cow. However, the concept of ahimsa is about non-violence which shows that the lion poses no threat to the cow through ahimsa. Since ahimsa creates a sense of bonding allowing the weak and the strong or the hunter and the hunted to work together, creating a progressive society and culture.

What Does Ahimsa Mean?

Ahimsa in common terms means ‘non-violence’. However, the word Ahimsa originates from the scriptures of Sanskrit and was used as the idea of nonexistence to injury. This concept of non-injury was first seen in the Vedas which is an Indian spiritual and philosophical wisdom dating back to even before 1900 BCE.

What is an Example of Ahimsa?

The notion of Ahimsa is non-violence and is not only restricted to the lives of human beings. The biggest example of ahimsa that is seen in daily life is being a vegetarian to prevent the killing of animals for their flesh. This practice requires the highest level of commitment and such commitment can only be achieved through including the idea of Ahima Paramo Dharma in our lives.

Everything is fair in love and war