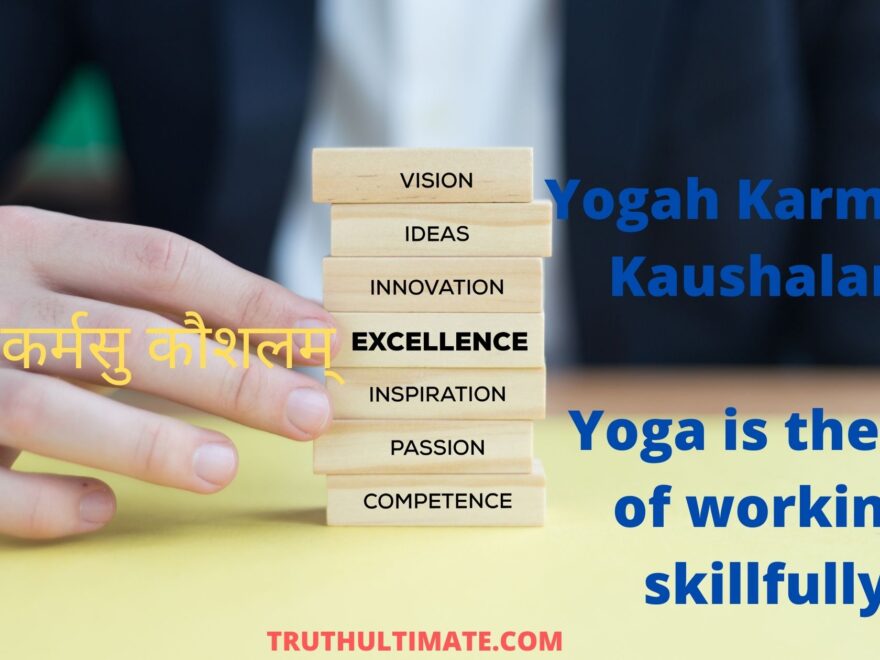 Yogah karmasu kaushalam is a great verse of Bhagavad Gita, which implies as ‘Yoga is the art of working skillfully’. Yoga is traditionally implied as to the union of one’s consciousness with the Supreme Consciousness or the Ultimate Truth.

The Bhagavad Gita is considered one of the holiest scriptures of the world. However, its highest recognition is associated with the motivational intention it possesses and the values inculcating to the society. There are millions of people on this earth whose life got transformed by this timeless teaching of the Bhagavad Gita.

Yogah which is a Sanskrit term, as we know, denotes the union of “the self” to the “supreme consciousness”. The term karmasu implies working or action; however, the kaushalam literally means being skillful or excellent in action. On the whole, it implies that Yoga is nothing but excellence in action, what we do or perform.

The whole concept implies that if someone is excellent or skillful or artful in the action or duty he is performing, he is on the path of yoga which ultimately can lead to the union of “the self” to the “supreme self”.

yogah karmashu kaushalam is fundamentally Sanskrit words taken from the Holy Bhagavad Gita. The combined Sanskrit words are greatly popular and revolutionary in their meaning and orientation.

yogah karmasu kaushalam in Sanskrit finds its dual meaning while being interpreted. The first interpretation explains-“yoga brings proficiency in action.” It implies that when someone practices yoga, ultimately, it brings mastery in the former’s action or duty. Yoga has inherent incredible potential to bring stability, decision-making quality, fearlessness, endurance, insight, etc. to bestow its followers.

When someone practices it naturally, it brings efficiency, proficiency, and excellence to his action. The practice of yoga makes him a true karma yogi being non-attached while performing the action or duty. The practice of yoga makes excellence while performing action because it teaches not to bother about the results and focus only on the karma or the assigned duty. No scriptures of the world so significantly explain the secret behind excellence in action or duty that one performs.

The second meaning of yogah karmasu kaushalam implies “proficiency in the action performed is the yoga.” It is further explained that anyone who is either well-versed in yoga or not if he excels in his action or assigned duty, is a true yogi. If a tea-maker is excellent in the task or action he is performing, he is a true yogi and can be considered on the yoga path.

This great interpretation needs to be understood correctly. If someone is skillful or excellent in his action or duty, it is considered that the former one is on the path of yoga. However, the action or the duty being performed must be of the right kind, i.e., right action or right duty. A shooter is excellent while shooting innocent animals. A sniper is perfect while killing someone for contract-killing. A pickpocketer is superb in his skills while snatching the chain or purse from someone.

These persons are excellent in their actions or tasks; however, they cannot be termed as true-yogi or karma-yogi. Hence the litmus test for yogah karmasu kaushalam is that the action or duty performing must be of the right kind.

This verse’s origin is from the holiest scripture, The Bhagavad Gita, where the Lord Himself motivates Arjuna in the course of the historical, moral dilemma in the context of performing the latter one’s own dharma or duty. In the meanwhile of the war between the truth and untruth, the Arjuna was kneeled to abscond from and being demotivated in performing his own right duty.

The Lord Himself had to appear to teach the friend and disciple Arjuna the essence and secret of the action that one has to perform to attain Yoga. It is the great pathway that we too can achieve the highest of our spiritual elevation while performing our duty or action in this materialistic world.

It is interpreted as “One who prudently practices the science of work without attachment can get rid of both good and bad reactions in this life itself. Therefore, strive for Yog, which is the art of working skillfully.” The Lord himself revealed to Arjuna about the concept behind the science of work, one must take in cognizance while performing the assigned task or duty.

Several premier institutions of the world have declared their motto as “yogah karmasu kaushalam” which denotes as one must have to be excellent in one’s work, which is nothing but real Yoga. The Lord Himself declared the most fundamental and motivational verse to motivate humanity to maintain this universe’s moral and ethical order.

Traditionally the Lal Bahadur Shastri Academy, Massorie, the premier training center for IAS officers preserve this yogah karmasu kaushalam as the great motto focuses on passing on the legacy to make the trainees a true karma yogi for maintaining the welfare and values of the society. It focuses on inculcating the great teachings to make them excellent in their action; that is true yoga.

The great efforts to make the social servants excellent in their action or duty without getting attached to it. It wants to transform them a true yogi rather than work-alcoholic. The attachment with the actions or the task makes someone addicted or work-alcoholic. Yogah karmasu kaushalam and its inherent potential make them get rid of these major imperfections and be the best for society.

Rare of humanity become able to understand the secret of this great verse. The majority of the population doesn’t understand the true essence behind this teaching. Bhakti, Karma, and Gyan Yoga are the absolute paths that lead to the realization or experience of the “Ultimate Truth”. Bhakti needs ultimate devotion and surrender to the Almighty.

Gyan yoga is the more challenging path that necessitates studying hard and accumulates the desired wisdom to be enlightened in a prescribed manner. The practitioners of Gyan yoga must have to acquire the in-depth knowledge and wisdom to experience the ultimate truth of life. Karma Yoga is the Yoga of action that can be practiced in a human being’s daily life even while being in the middle of worldly affairs.

A karma yogi has to make a delicate balance between materialism and spiritualism. The yogi has to perform his assigned task or duty in the right manner while being excellent at it. Any human being who is doing his ‘Right Duty’ in excellence is a dedicated yogi, and this path can lead to the union with the “Supreme Consciousness”. Right duty analogous to right livelihood with good intention determines its destiny. All the tasks we are performing are not the right duty.

A butcher is excellent at cutting the meat of innocent animals, but that cannot be termed as true Yoga. A pic-pocketer is a master in stealing the money, or a thief is a champion of unlocking others’ doors; however, these actions could not be considered as true Yoga. All the work or duty we perform to be in the categories of Yoga must be of right intentions on the paths of right livelihood.

It doesn’t matter what the work someone is performing, whether the work is inferior or superior. Saint Kabir, Raidas, Dadu, etc. were used to do the work of so-called inferior nature like being-cobbler, tailor, etc.; however, they attained the Yoga‘s zenith based on the principle of ‘yogah karmasu kaushalam’.

A man making tea and serving to the others, if he excels in his work, is a true yogi. A person who is cleaning the road excellently or skillfully can be termed as a true yogi. However, a priest or a saint unable to excel in the work or duty that he is assigned; then the work will not fall in the category of Yoga. This is the greatest secret of yoga unknown to the masses, however, one who knows it can be the master of his destiny.

‘yogah karmasu kaushalam’ is based on the principle that one must perform one’s duty without any attachment with the results. If someone is severely attached to the work results, one cannot be excellent in work, and consequently, it could not qualify in the category of Yoga. Doing the work without any attachment is one of the finest lines of difference; however, it creates a significant difference with the outcome or results. A doctor finds himself unable to operate on his son. However, it is very common for him to operate on several patients a day. It is simply because of the attachment of the doctor with his son.

Here, the attachment makes him unable to excel in his duty and consequently could not qualify in the category of Yoga. Hence, if someone wants to be excellent in the duty or action assigned to him on the path of yoga, one must have to perform it without any attachments. Practically it seems impossible to perform the duty without any kind of attachments, however, the practitioners make it easier with the application of the right knowledge, determination and practice.

Human life or humanity itself is the most remarkable creation of this universe. The human being or any creature based on his intended nature binds to perform the action or duty. The majority of the population does not know the secret behind the science of karma. Yoga is nothing but the art of working skillfully or excellently while performing the actions.

Excellence or proficiency and yoga both are interrelated and interdependent. If someone is proficient in his action or duty, that paves the path of yoga. If someone is a true karma yogi, his actions will be of the highest quality. Yoga is the art of living that leads to supreme consciousness. Yoga is not a religion-it is beyond all boundaries that lead to the absolute liberation of life. The human being is capable of making excellence in his action or duty and can attain liberation through the Yoga of action.