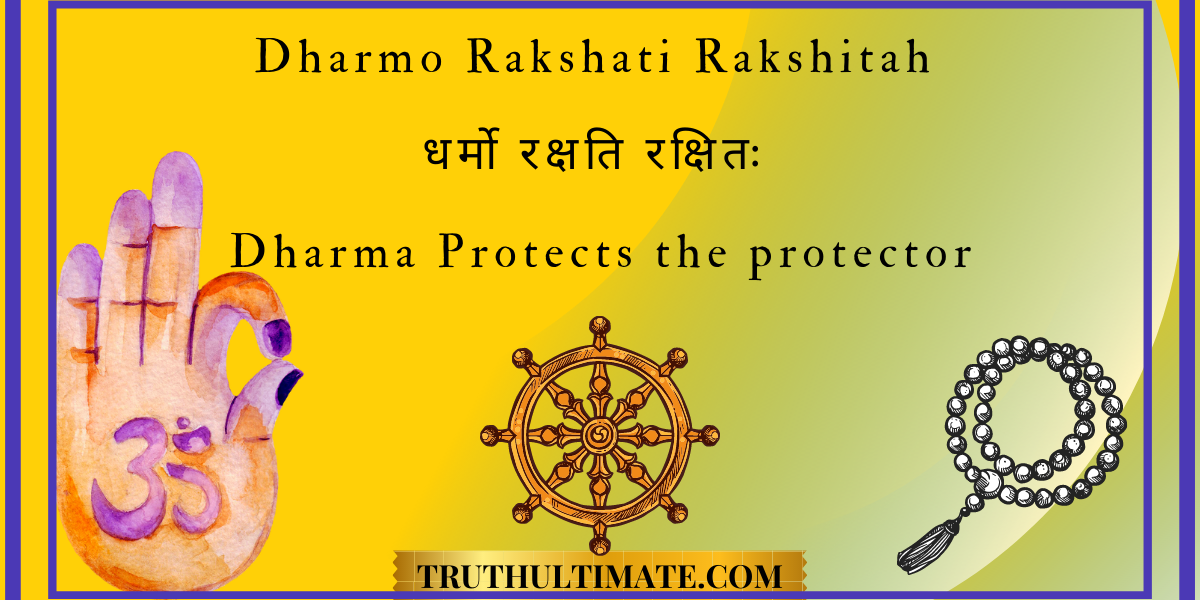 Dharmo Rakshati Rakshitah is one of the most renowned and widely used verses in Hindu culture and tradition. This phrase marks a very influential and religious impression on the hearts of the common masses.

This phrase holds such a prestigious place because of its religious, traditional, and ethical values that date back to the historical epics of the Hindu culture. The most prominent of these epics which find mentioned this verse is Mahabharata (a Sanskrit tale of ancient India).

Dharmo Rakshati Rakshitah is a Sanskrit sloka that translates as

“Those who protect the Dharma are protected by the Dharma”

All these principles make a complete picture of a Dharmic person. The slok Dharmo Rakshati Rakshitah thus truly means that if you are a Dharmic human possessing all the ethical and moral qualities, you are protected by Dharma itself. Here protection means that your pious nature helps you succeed in all the frames of life. It not only offers protection in this life but also in the life hereafter.

Dharmo Rakshati Rakshitah- a Sanskrit shloka pronounced as “dharmo raksati raksitah”, is widely popular and holds great religious importance in Hinduism. The phrase belongs to the major Hindu epics the Mahabharata and Manusmiriti.

In Manusmiriti, this shloka is part of verse 8.15. The whole Manusmiriti Sanskrit verse says,

This whole Sanskrit verse of Manusmiriti means that Dharam destroys those who destroy it, and it protects those who protect it. Dharam is something that offers you a great deal of protection from all sorts of ills, harms, and evils. It can give you everything and it can also take everything from you. Therefore, Dharam holds the power to either make you or abolish you.

The major Hindu epic “Mahabharata” and the “Manusmiriti” mention the full Dharmo Rakshati Rakshitah sloka. The presence of this slok in them reflects the importance and true meaning of this phrase.

The complete sloka for Dharmo Rakshati Rakshitah is in Sanskrit that is present in verse 8.15 of Maunsmiriti. It states,

This sloka is roughly translated as “Dharma only destroys (those) that destroy it. Dharma also protects those that protect it. Henceforth, never ditch virtue and never destroy Dharma. Know that if violated, Dharma destroys us.”

This sloka is also mentioned in the episode “Yaksha Prashna” of “Mahabharat”. Here, it is present as a dialogue between Yudhishthira and Yama. Yama is the Hindu Lord of Death, and is the epitome of Dharma and Justice. The use of this sloka in this episode teaches how Dharam protects humans when humans offer the same protection to it.

The true meaning of Dharmo Rakshati Rakshitah is to preserve the Dharam and hence the society. If Dharam is protected i.e if every individual practices the cosmic principles of dharma, eventually the whole society becomes peaceful and prosperous.

Due to these many constructive effects of Dharam, the sloka Dharmo Rakshati Rakshitah has become the main motto of many organizations. Among these organizations, the National Law School of India is the one. The law university has made this slok as the guiding principle for its future lawmakers and law enforcers. Here Dharmo Rakshati Rakshitah as the motto guides and motivates them to stay positive and righteous at all times. It gives a lesson to practice and preach honesty, equality, and justice, that builds a foundation of an unbiased and just society.

Moreover, this sloka is also the motto of India’s intelligence agency (RAW). Here, it uplifts the morale to take the path of truth, dedication, and humanity. Dharma protects and defends the ones who defend it. So, here if the defenders defend their Dharam they defend the entire society.

This chain goes on to every other person who is working in any aspect of life. Thus, Dharmo Rakshati Rakshitah is the motto of every person who aims to achieve and struggles to make something out of this life.

Mahabharat- that is one of the major Hindu epics that dates back to ancient Hinduism. It is a collection of philosophical, religious, cultural, devotional, and ethical values that summarizes the “four goals of life” or “purusartha”. Mahabharat narrates the tale of struggles between two groups of cousins in the Kurukshetra war.

The sloka Dharmo Rakshati Rakshitah is also mentioned in the Mahabharat. Here, it reflects its true meanings of dharma, devotion, dedication, and struggle. The famous episode of Mahabharat, the “Yaksha Prashna” involves this sloka.

In this episode, the dialogue that includes the sloka took place between Yudhishthira and Yama (the embodiment of Dharma and Justice), who disguises as a Yaksha. This episode teaches about how dharma if protected, protects us in the times of Kaliyuga- the worst of all four yugas, the age full of conflicts and sins.

The episode took place when Pandavas (the five brothers Yudhisthira, Bhima, Arjuna, Nakula, and Sahadeva – the main characters of Mahabharat) used to live in the forests. One day a deer took the stick (used to make fire from Sage’s home). The saint tried hard to recover the stick but failed, so he requested the Pandavas to recover it for him.

The Pandavas chased the deer for so long that they ended up in the deep forests. After a while, Yudhishthira got tired and was very thirsty. So, Sahadeva climbed a forest to look in search of any water bodies. He saw a lake nearby and went for it. The lake was silent and there were no signs of any living being except for a crane.

Sahadeva was thirsty but before taking the water for his thirsty brother he started to quench his own thirst. As he started to drink water, suddenly a voice stops him and started asking him to answer some questions before drinking the water. Sahadeva ignored the voice and drank anyway. As he drank the water he died.

After a while, Nakula came to the lake in search of Sahadeva and finds him dead. But instead of getting the warning from dead Sahadeva he also chooses to drink the water and died. Later, Arjuna and Bhima came and they also ended up being dead after drinking the water, ignoring their dead brothers.

Yaksha was very surprised when Yudhishthira chose Nakula’s life. Yaksha couldn’t resist and asked, “Oh king, why did you choose your step-brother Nakula, and not your powerful brothers Bhima, Arjuna, and Sahadeva?”

At this point in the story, Yudhishthira replied Yaksha with this sloka and said,

“Dharma only destroys (those) that destroy it.

Dharma only protects those that

Further, Yudhishthira explained that his father had two wives, Kunti and Madri. For me both of them are equal and I have equal love and respect for both. I wish that none of my mothers lose their son. I am alive so my mother Kunti has one son. And I want my other mother Madri to also have a son. Therefore, I chose Nakula to live.

After hearing Yudhishthira’s views and seeing his Dharma, Yaksha was very pleased. So, he granted all the Pandavas their lives back. He also gave them the boon to win the great Mahabharat war.

Bhagavad Gita- a 701-verse Hindu scripture is also a part of the great epic Mahabharat. It is one of the major and the most sacred scripture of Hinduism. It was given to remind Arjuna’s commitment to his Dharma.

The sloka “dharmo rakshati rakshitah” is also discussed in Bhagavad Gita. Here, it answers many uncertainties of our lives as per the role of Dharma in everyday life. It answers all the philosophical, religious, social, cultural, and ethical aspects of our lives. Most importantly it shows how dharma is actually a protector and not a slayer.

Just like us, Arjuna had many questions related to the principles of dharma and Karma Yoga. He was so confused about dharma that he even used to talk about dharma with confusion. This is where the Bhagavad Gita helped Arjuna and helps us to let go of all the confusion related to dharma. Bhagavad Gita answers it as,

It says, that in order to protect yourself you have to follow your “Swa dharma”. Every one of us seeks to attain happiness but our ways to it are different. So, until we get our free flow we should act as per our innate natures. Now, what is Swa dharma?

Gita in chapter 4, shlok 13 explains it as that our humanity is divided based on Guna Karma i.e their Karmic badges. To state simply the whole of the Gita preaches and talks about your inner self. So, if you focus on your one true self and allow your actions to purify your soul, you have accomplished dharma.

Manusmiriti (मनुस्मृति) is among the first Sanskrit epics translated to English. It is one of the legal and ancient Hindu texts included in the constitutional Dharmasastras. It played a role in constructing Hindu laws at the time of the British colonial government. There are over 50 manuscripts of Manusmiriti.

The source of this slok “dharmo rakshati rakshitah” primarily belongs to verse 8.15 of Manusmiriti. The whole verse of Manusmiriti stating the sloka is,

Another famous verse of Manusmiriti that states dharma includes the 10 qualities that one should possess to achieve the path of dharma. The verse 6.92 of Manusmiriti says,

This verse is roughly translated as:-

“Patience, forgiveness, self-control, non-stealing, cleanliness, and purity, restraint over the senses, wisdom, knowledge, truth, and serenity are the ten attributes of dharma.”

Thus, this verse also elaborates how following the path of dharma protects the entire humanity.

The uniqueness of this slok lies in the fact of its universal pertinence. The beauty of this is that by following its path you achieve everything not only here but in the life hereafter. Your material possessions, societal statuses, and worldly accomplishments do not matter.

The only thing that matters is either you are true to yourself or not. And the only way to remain true to oneself is by following the path of dharma. It indeed protects you from all the harms and blesses you with true wealth i.e the righteousness.

This famous Sanskrit dictum dates back to the time of ancient India. This phrase belongs to many holy scriptures and epics of Hinduism. Many people have different understanding of this slok.

However, the literal meaning of this sloka is “those who protect the Dharma are protected by the Dharma.” There is no adequate translation that defines Dharma properly but it is very clear that dharma is the gateway to righteousness and self-satisfaction.

This dictum has two implications in itself. one being “dharmo rakshati”, which means dharma offers protection. And the other being “Rakshitah”, which brings a sense of individuality and ultimately collective benefits.

The first part is very clear that if someone contains all the qualities of a dharmic one, he is protected. Protection means that if you have contentment with your inner self, no other thing can harm you. The other part explains that in order to seek that protection you have to fulfill your duty towards protecting your dharma.

It also elaborates how a dharmic change on an individual level brings a societal transformation. Like, if each and every individual of the society motivates himself to good deads, practices moral and ethical values, basic decency, and religious ideals, finally, a time will come when there will be no harms and zero evils. Thus, Dharam is personally observed, but its effects are wholesome and reflect on a large scale.

Therefore, it shows that we are the judge of our own selves and if we observe ourselves under the lens of Dharma we will always succeed.