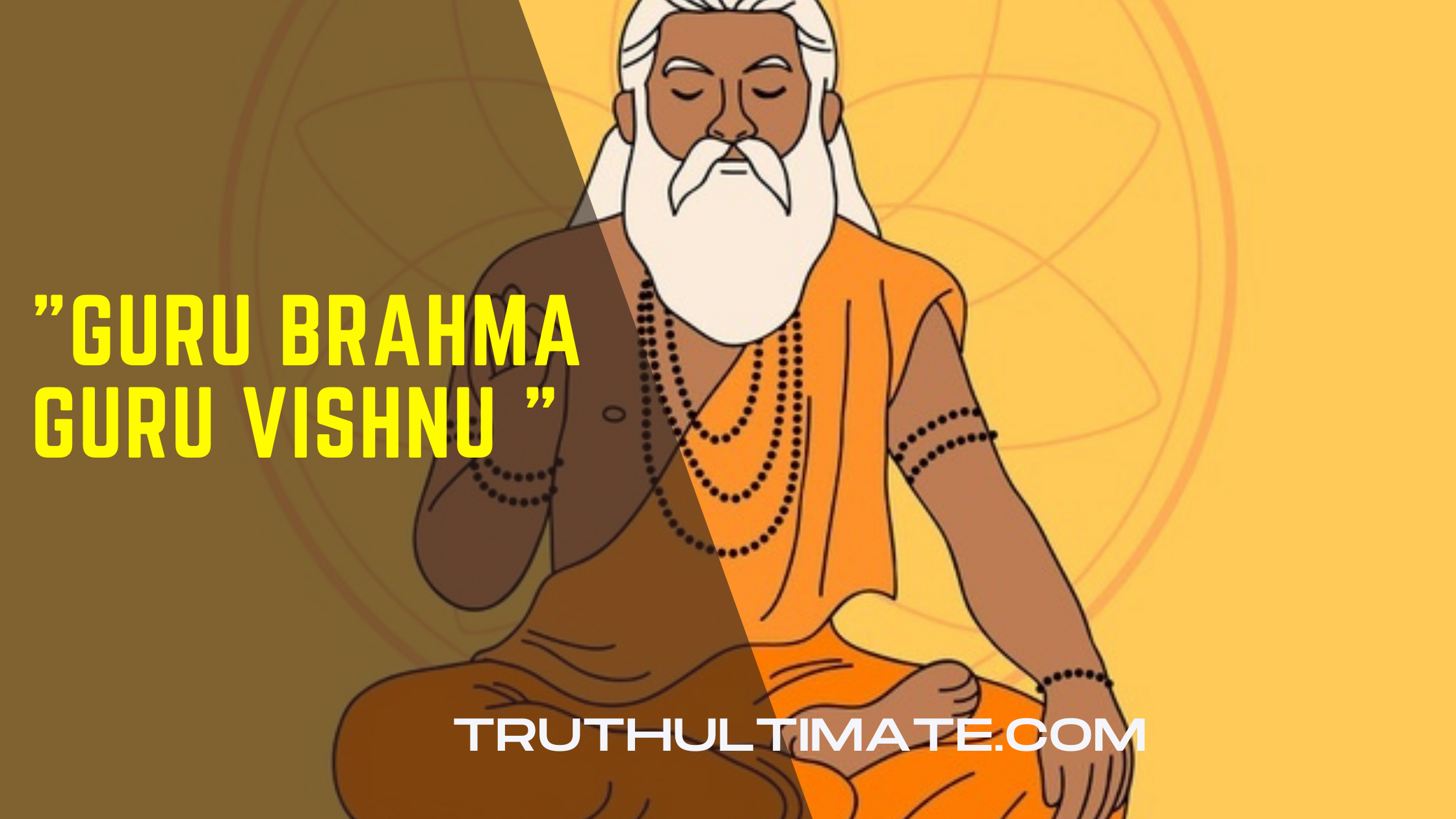 People around the world give so much importance to this particular Guru Brahma Guru Vishnu mantra which is also known as the “Guru Mantra”.

Hindus chant this for their growth in spirituality. The guru mantra is the oldest and highest mantra since civilization and learning.

Since civilization, human beings used to seek knowledge and wisdom from gurus or teachers.

Like many other mantras, this holds extensive meaning that many of us fail to understand while chanting the mantra.

Let’s look into the meaning and other aspects of the Guru Mantra, which is very popular specifically on the Guru Purnima.

But, it doesn’t fail to amaze the people apart from Guru Purnima as well.

Before going any much deeper, let’s just break the matra word by word to understand the literal meanings.

In this way, Guru implies the educator who eliminates haziness and brings enlightenment.

Guru carries the highest legacy of knowledge, wisdom, and experience. When someone, fortunately, finds a true Guru or teacher, only enlightenment becomes possible.

A Guru has tremendous information, knowledge, wisdom, insight, and control over a subject and utilizes it to direct his pupils and students.

Teachers or Gurus are the structure squares of society. A society can’t have the proper foundation and pillar without Gurus.

They teach individuals and assist them with turning out to be better Human Beings. A society is sum total of the qualities and moral values of human beings.

The Gurus and teachers are the main architects who inculcate the values to the society.

Hence, it is believed that the highest importance must be given to the Gurus or Teachers by states and society.

Many developed nations which having better human rankings give higher pay and status to their teachers.

Guru is the remover of ambiguity. Gu means obscurity, and Ru implies remover. Dimness alludes to what exactly darkens the light of mindfulness.

The holiest scriptures Bhagavad Gita states that the doubtful mind will get destroyed.

But persons who possess neither faith nor knowledge, and who are of a doubting nature, suffer a downfall. For the skeptical souls, there is no happiness either in this world or the next.

Only a true Guru or teacher has the potential and capability who can dispel the doubts and transform your doubting nature to a peaceful and confident nature.

Guru is the illumination head that helps one in the acknowledgment of the genuine Self, the entire Self, the blessed Self.

Guru shows the mystic path which helps you to know your “True Self.” Once someone finds to know the true self, his life gets transformed to the highest level.

The guru eliminates avidya, or obliviousness, which is an instance of the mixed-up character.

Lord Buddha taught the world that Avidya or Ignorance as the root of all sufferings.

Only the true Guru or teacher is capable to dispel the avidya or ignorance inside you.

It is the point at which you think you are your character, mixing up your body/mind holder for what your identity is and overlooking who you truly are.

It is the point at which you feel separate from the entirety.

As we know that the mantra is in Sanskrit originally, hence it’s better to know the Sanskrit version as well.

Here is the mantra in Sanskrit.

Guru Brahma Guru Vishnu sloka is one of the most ancient and established verses since old age civilization.

This sloka finds its awesome place and status in our great scriptures. Here is the full sloka of the Guru mantra with transliteration.

So, it will be easy for those to understand who don’t know how to read Sanskrit or find some difficulty in understanding it.

Let’s look at the lyrics of the sloka. Here is the translation of the popular Guru mantra that you may have listened to on occasions like Guru Purnima or special prayers.

Guru is the Creator (Brahma), Guru is the Preserver(Vishnu), Gurudeva is Destroyer(Maheshwara)

Guru is the absolute (singular) Lord himself, Salutations to that Sri Guru

You can download and listen to many versions of the Guru mantra on different platforms and different websites.

This way, you don’t have to chant it by all your as you can listen to it every day and incorporate the teachings and spirituality in your life.

Guru Brahma Guru Vishnu quotes are quite powerful and establishes the highest importance of the Gurus who transform the lives of the disciples.

The Guru Mantra quotes give wisdom and motivation to make our life prosperous and successful.

Let’s look at some of the Guru Mantra quotes.

“May your Guru’s favors give you limitless joy and achievement and clear the correct way consistently.”

“Guru is a definitive method for tracking down truth and information. We should look for Guru and their lessons to make our life illuminated and cheerful.”

“Each Person in the World shows you Something, Either Good Bad or Worse, Gratitude for All the lessons.”

Until now, we have established the fact that the Guru mantra brings spirituality and guidance.

And, if you make it a part of your daily routine, by listening or chanting, you will understand the importance of Gurus in your life.

Their blessings and guidance pave the path for you. So, acknowledge all the Gurus in your life, and this mantra is the perfect way to do that.

It might likewise be utilized all the more broadly to adore and summon the help of every single profound Guru.

In yogic practice, a lot of significance is set upon the connection between an understudy and their Guru.

The Guru Brahma Guru Vishnu mantra perceives the worth of the Gurus’ lessons in tracking down an association with holiness.

It is eventually a declaration of appreciation for every profound instructor and the direction they give in beating obliviousness to track down illumination and arousing.

Brahma, Vishnu, and Shiva likewise address the three phases of life and the three components of oneself.

The full mantra recognizes every one of these stages, then, at that point, states dedication to the Guru who eliminates dimness and obliviousness.

In perceiving that Brahma, Vishnu, and Shiva address components of oneself, the mantra additionally summons the profound lessons that are installed in oneself.

Which is associated with the person’s inward teacher and guiding force.

Thusly, the Guru Brahma Guru Vishnu mantra is considered by some to be a self-empowering mantra.

What is the meaning of  Guru Brahma Guru Vishnu ?

The great Guru Mantra implies that Guru is the Creator (Brahma), Guru is the Preserver (Vishnu), Guru is the Destroyer(Maheshwara) and Guru is the absolute Lord or Supreme Brahman Himself, Salutations to that Sri Guru.

Which is Guru Mantra?

Guru is made of the words ‘Gu’ and ‘Ru’ where ‘Gu’ is Darkness and ‘Ru’ is Remover. The term Guru itself implies the Dispeller of Darkness.

The Guru is someone who is able to remove the darkness and brings light to your life. The guru mantra is usually a secret one given by the Guru to his students or follower.

The guru mantra is sacred and secret and is believed not to reveal anyone. The guru mantra helps to pass over all the hurdles of life and come out as a winner.