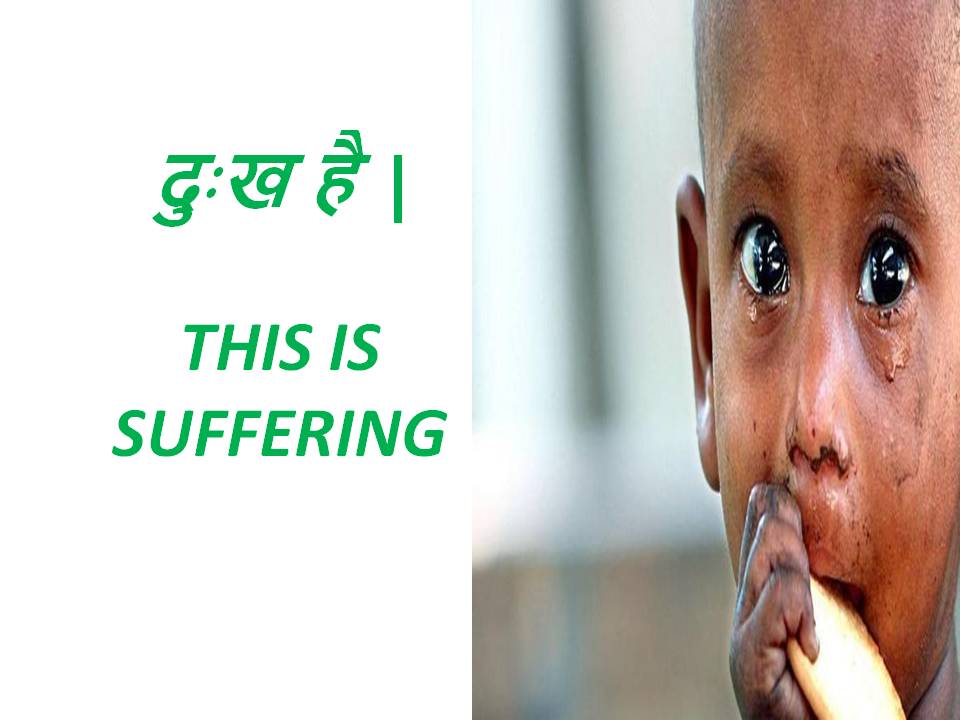 In the first meaning, the ‘Noble’ term denotes that only the noble person will be able to understand these ‘Truths’ rather ordinary person. In the second meaning, it is believed that these truths are ‘Noble’ and ‘Eternal’ in nature. It is popularly known as ” Chatwari Aryasatya”(The Four Noble Truth). The first noble truth paves the foundation for the remaining Noble Truths.

Siddharth Gautam was the son of a king. His upbringing was such that all the luxury and the means of pleasure were centered around the prince. His father, the king, made a new colony ( Nai Nagari) inhabit all the old, sick, and physically disabled people there. It was done as Siddharth Gautam would unable to see any sign of suffering. However, destiny was something else. One day Siddharth found the opportunity to visit the countryside and became able to see an old man, a sick man, and a dead body. The pain and suffering of those men made Siddharth Gautam start the journey to know the ultimate truth of this life.

Very few human beings with continuous efforts of ‘Right Knowledge’ and ‘Sakshi bhav‘ (means being like a witness ) find able to perceive the truth of it. Ordinary human beings have a perception that this temporary happiness is as ‘truths’ in this temporal world. They also believe this temporary happiness is eternal bliss. However, these are merely temporary and fragile in nature in this temporal world. Due to ignorance, human beings have understood it as permanent truths of life. Due to their temporary and fragile nature, these get lapses or expires shortly. When they get lapses or ends –it causes immense pain and grief in our life.

There is youngness but when it degrades, it brings the pain of old age. There is wealth but when it destroys, it causes pain. The parents are together with us but when they die, it leaves us in immense pain. The togetherness of husband and wife is one of the most beautiful moments in our life. But when anyone whether husband or wife parted away in this life journey, it makes us alone and desperate. Our children bring great joy and happiness to our life. But when we lose them, it becomes an unexpected tragedy in our life.

When we get continuous failure in our life, we feel pain. Our minds want to achieve something in certain ways. However, the external circumstances are not in our hands and so the achievement. When we don’t achieve the desired things. It gives us pain. There may be a great friendship with anyone but when the circumstances break it, we find ourselves in isolation and depression. The attraction of the physical body and beauty brings happiness. But due to the impermanence nature, it also gets decay shortly and brings frustration.

Pain is inevitable, Suffering is optional

Lord Buddha preached to the world that this world would exits till so long, so the pain is. The acceptance of the truths is the real ‘Art of Living’ (AOL). Due to ignorance and illusion, we don’t want to accept these truths. The human being wants to catch all these attractions of happiness like holding sands hardly in our fist. However, the more one wants to hold; the more one loses the things as the sands press out from our fist.

When we find ourselves unable to control the circumstances or the things around us in a permanent way — we get submerged in the ocean of pain and suffering. When a human being doesn’t accept the truth, he finds himself unable to handle such situations and wants to end this ‘Precious Life’. Sometimes human beings languish in pain and suffering day and night for years and years.