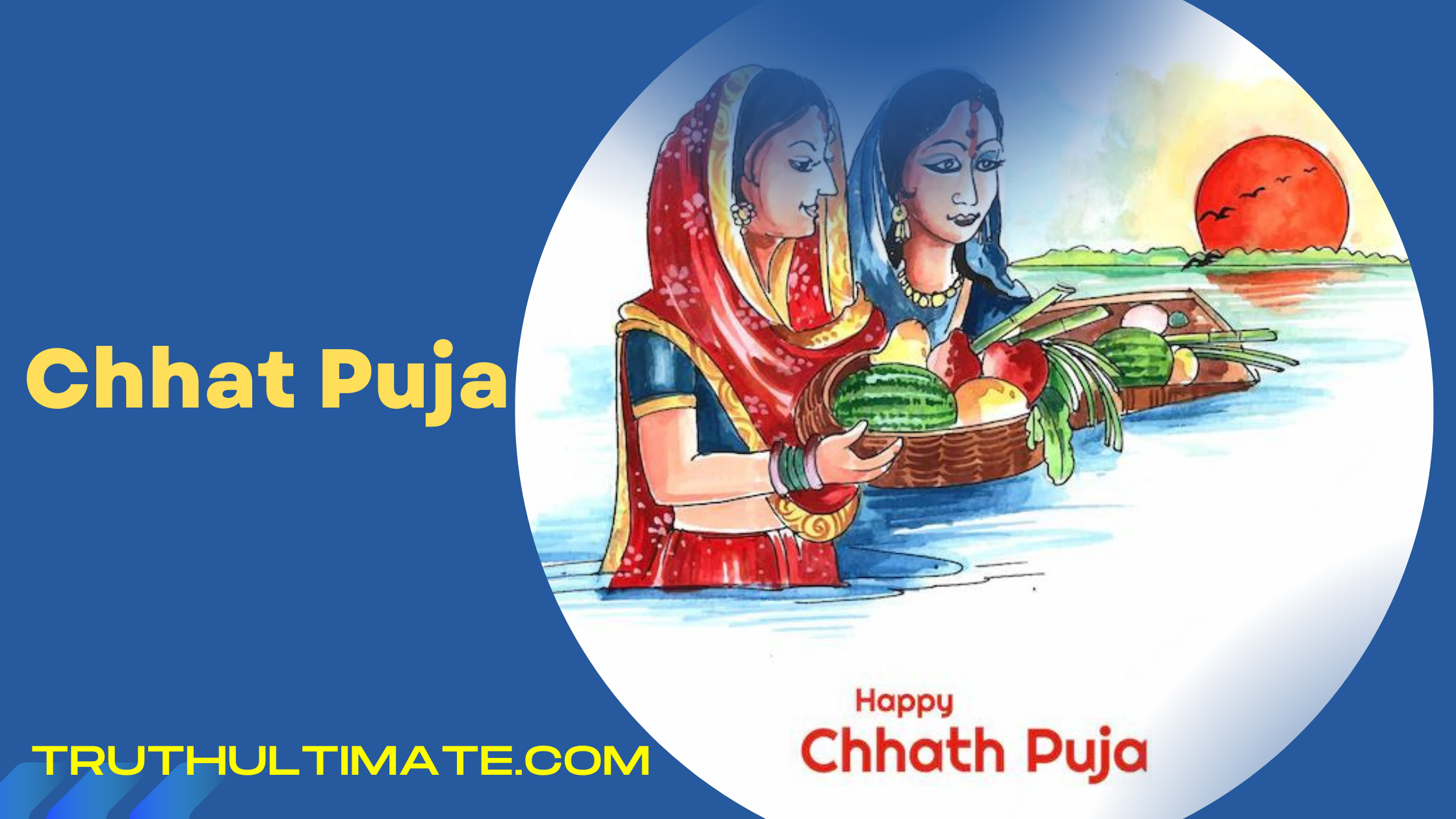 Chhat Puja is one of the country’s significant festivals that has been in practice since ancient Vedic times.

The highlight of this puja is the worshipping of the Sun God or Surya. The puja is also dedicated to Chhati Maiya (Shashti Devi), the Sun God’s sister.

The significance of the Chhat Puja is to seek God’s blessings and ensure they bestow all the wishes of the devotees.

The Sun God is considered to possess all the power and the Chhat Puja is the only major festival dedicated to the Lord.

In the Hindi language, ‘Chhat’ means six. This indicates the celebration of the festival on the sixth day of Kartika month.

On the festival day, devotees pray before the Sun God as he is considered the force that not only binds the universe but also provides energy to all living beings.

Over a period of four days, devotees sing prayers and participate in different kinds of rituals, including observing a fast, also known in India as ‘Vrat.’

Why is Chhat Puja Celebrated?

This great festival is celebrated as a mark of tribute to the Sun God. We believe that the power of the Sun is vital for the sustenance of life on the earth.

This festival is celebrated in different states of India, irrespective of social stigmas, caste, creed, and gender, to signify the importance of the Sun.

When we pray to the Sun God, it is believed that he will make life easier on the earth, and all our wishes will come true.

Chhat Puja is Celebrated in which State of India?

However, the most prominent state is Bihar regarding the celebration of Chhat Puja.

This festival is celebrated for four days, after the conclusion of other important festivals like Diwali and Bhai Dooj.

According to an ancient Indian legend, there once lived a king named Priyavrata and Malini, his wife in a city.

The couple were childless and were therefore very sad. With a strong desire to have a child of his own, the king asked Maharishi Kashyap to perform a Yagya that would grant the couple a child.

Seeing the wish of the king, Maharishi Kashyap conducted Putreshti Yagya and soon, as a result, Malini became pregnant.

The couple’s happiness was shortlisted when, after nine months, the queen delivered a dead son.

After this incident, the king became upset and eventually decided to kill himself.

However, as he was about to commit suicide, Shashti Devi, the beautiful goddess, appeared before him and stopped him from committing the sin.

After introducing herself, the Devi blessed the couple and suggested they worship her with full faith for all their wishes to come true.

After obeying the order of the Devi, the couple duly worshipped the goddess with full devotion.

Seeing her devotion, the goddess appeared before the couple on the Shashti Tithi of Kartik Shukla and blessed them with a lovely son.

Since this incident, the celebration of this puja has continued to take place in different parts of India.

Another story worth remembering is when the Pandavas lost their huge palace due to gambling.

It is believed that Draupadi observed fast and performed this geat puja. Seeing her devotion, God fulfilled her wishes and the palace was given back to the Pandavas.

There is also a Chhat Puja story that can be dated back to the times of Ramayana.

According to this legend, after killing Ravana, Lord Shri Ram came to Ayodhya and observed a fast with Sita on the day of Shashti of Shukla Paksha in the month of Kartik.

The objective behind the fast was to create Ram Rajya. Both Ram and Sita then worshipped Sun God.

Another story that can be traced back to the times of Mahabharata is of Danveer Karna.

Karna used to worship his father, Sun God daily. As per the legend, the tradition of worshipping the Sun was first started by Karna.

He used to bathe in the river and then offer Arghya to Sun God as part of daily rituals.

How is Chhat Puja Celebrated?

On the first day of the puja, devotees take a bath, preferably in a water body like the Ganges.

After the bath, they clean their houses and nearby areas. Once the cleaning is done, prasad is prepared using ingredients like chana-moong dal, bottle gourd, and pumpkin.

Women who perform this pooja are called ‘Vrattis’. Vrattis eat the prasad once during the day.

After Vrattis consume the prasad, the rest of them can be eaten by other members of the family.

Vrattis observe a full-day fast on the second day of the festival.

To break the fast after the sunset, the Vrattis consume Rasaio-Kheer, a special prasad prepared by themselves.

On the third day of the festival, the vrattis used to go to the great Ganges or any river or water bodies and pray to the setting Sun God.

This day is of great importance as the main event takes place. The female folks pray and rest at home.

They also sing folk songs near the water bodies. A special ritual called ‘Kosi’ is carried out on the 3rd day, during which five sugarcanes are combined together to form a canopy.

This canopy will be used in the prayer and represents the five elements of the earth.

This ritual is typically carried out in a family that has witnessed a wedding or a birth recently.

On the final day of this great festival, prayers are offered to the rising Sun God. Also, during the sunrise, various religious rituals are carried out.

As the Sun rises, devotees go into the water and offer ‘Arghya’. Once this stage of the festival is over, the Vrattis take blessings from the elders and eat prasad to break the fast.

On the occasion of this great festival, we pray for the health, wealth, and prosperity of our near and dear ones with the Sun God.

There are plenty of wishes and messages that you can share with your loved ones.

1. “May all the happiness and blessings be yours on the auspicious occasion of Chhat Puja. Let all your dreams come true, and evils stay away from you. Happy Chhat Puja 2022!”

2. “Hope Chhat Puja 2022 brings lots of opportunities and hopes in your life. May you be able to fulfill all your dreams and keep yourself satisfied.”

3. “On the occasion of Chhat Puja 2022, may there be a beginning of fortune, glory, and good life for you, setting a new and exciting phase of life for you. Happy Chhat Puja!”

4. “As we pray to the Sun today, we hope it never sets in your life. Stay blessed and enjoy a great life ahead with your near and dear ones. Have an incredible Chhat Puja 2022!”

5. “May this Chhat Puja provides you with the strength of an elephant and the courage of a lion. Happy Chhat Puja!”

Chhat puja 2021 is greatly celebrated on the tenth of November 2021, the primary celebration of Chhath Mahaparv is being commended on Wednesday.

In the Chhath celebration, which goes on for four days, the love of Chhathi Maiya will be finished while offering arghya or offerings to the Sun God while setting.

As indicated by the Hindu schedule, Chhath Puja is praised on the 6th day of Kartik Shukla Paksha. Chhath celebration is essentially celebrated in the territories of North India. It is praised with extraordinary energy and ceremony, particularly in Bihar, Jharkhand, and Eastern India.

It is believed and as per ancient scriptures that the Sun god is the only God human beings can see directly from this planet Earth.

The Sun god is a source of all kinds of energy and life formation and functioning on this earth. The existence of humanity on this planet rest with the Sun god.

He is the ultimate source of life forces that get to operate on the planet.

The ultimate importance of the Sun god led humanity to take cognizance and pray to this Ultimate God for their survival and prosperity.

Chhath puja is is the implication of this great importance for the entire humanity. Chhat puja is beyond any kind of religion or ritual practice.