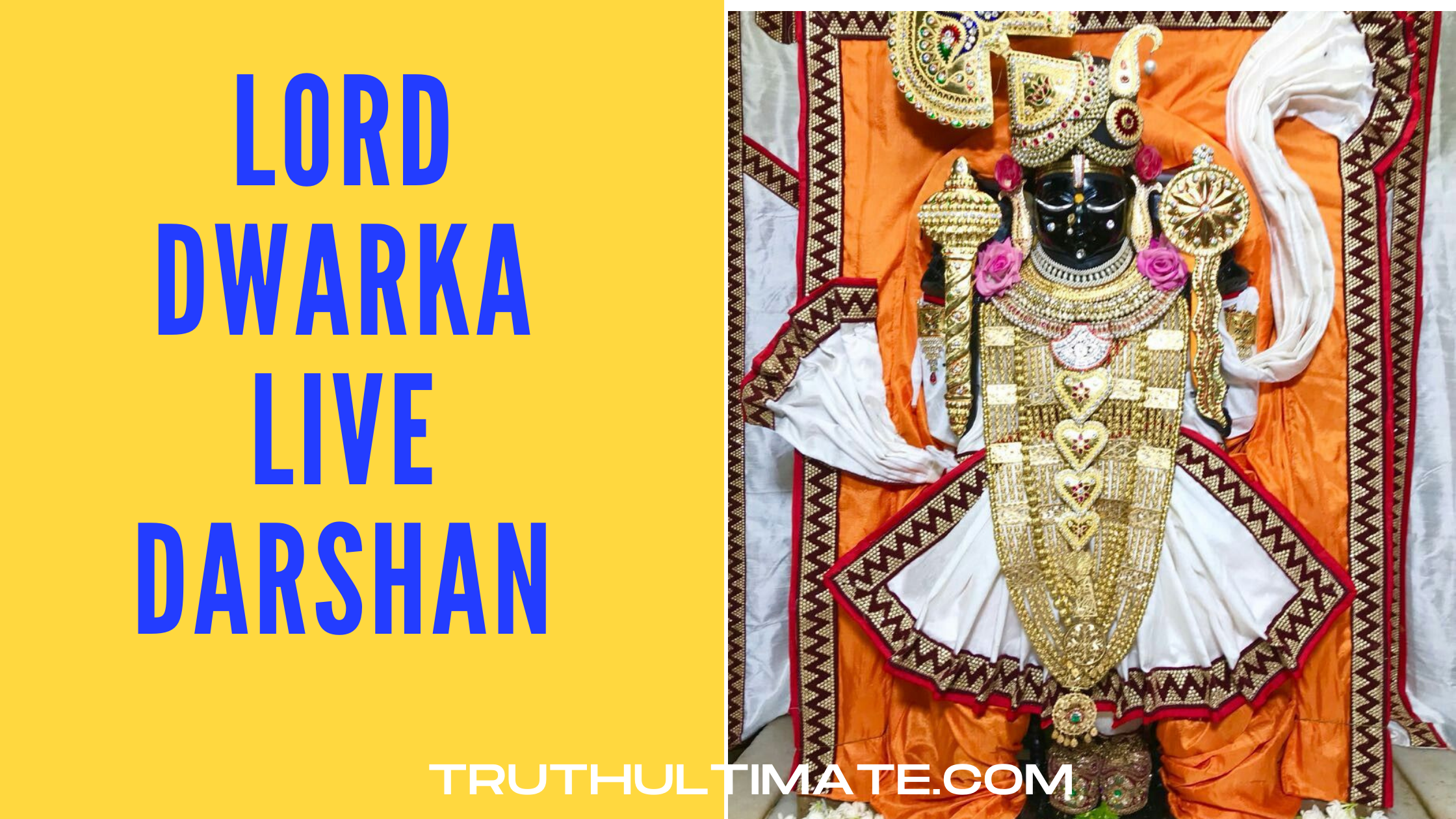 Dwarkadhish Live Darshan is nowadays a reality with the help of modern technology. The almighty Dwarkadhish is omnipresent and is everywhere.

Lord Dwarkadhish is one of the holiest abodes for devotees across the Globe and can be visited as Dwarkadhish Live Darshan with the use of technology.

According to legend, Shri Krishna, also known as Dwarkadhish, was the earliest known ruler of the Okhamandal in Gujarat State.

Lord Shri Krishna was the eighth incarnation of Lord Vishnu.

The Lord, during his time of being the ruler of the empire, fought several battles with the king of Magadh Desh, Jara Sangh.

The capital of Lord Shri Krishna’s kingdom was established at Dwarka after the seventeenth battle with Jara Sangh on the banks of River Gomti.

The great epic the Mahabharata and the greatest preach ever for entire humanity in Bhagavad Gita– are associated with Lord Krishna.

There is an interesting tale of how Lord Shri Krishna became famous as Dwarkadhish.

Under his leadership, Dwarka prospered and became a benchmark for all the nearby kingdoms.

When Jara Sangha attacked Mathura multiple times, he was ably assisted by Dhimak and Hansa.

Shri Krishna had foreseen this strength of Jara Sangha, and therefore, he got them cleverly killed.

In his lifetime, Shri Krishna had to fight with many people who were evil-minded and materialistic.

There he revived his life’s goal – establishing a kingdom that will be a Dharma Rajya in the real sense.

When he became the ruler of this kingdom and restored righteousness in the region, he began to be called by the locals as Dwarkadhish’.

Dwarkadhish Live Darshan is the reality nowadays and devotees can get the blessings of the almighty.

Dwarkadhish Live Darshan makes this possible for the common man across the globe to have glimpses of this great temple. The Dwarka Mandir as we know it today is also called the Jagat Mandir. The main temple is in a five-storied building and is believed to be 2,000 years old.

The temple structure is supported by 72 pillars. The Dwarka Mandir is a Pustimarg temple and, therefore, all the rituals and procedures followed belong to Vitheleshnath and Vallabhacharya.

As per the legend, the original Dwarka Mandir was built by Vajranabha, Lord Krishna’s grandson.

However, this structure was destroyed in the 15th century by Mahmud Begada. The rebuilding took place in the 16th century.

Today, Dwarka is considered one of Hindu’s sacred places and is one of the Char Dhams.

The famous philosopher and theologian, Adi Shankaracharya, visited the Dwarka Mandir, and there is a memorial within the temple complex dedicated to his visit.

The temple for Dwarkadhish darshan has an audience hall or an assembly hall.

Furthermore, there are two entrances to the place of worship – the Moksha Dwar (the main entry door) and the Swarga Dwar (the exit door).

The prominent deity in the sanctum is Dwarkadhish who is seen with four arms. There are two other chambers near the sanctum.

The right chamber has the images of Aniruddha and Pradyumna (the Grandson and Son of Lord Krishna).

The left chamber is of Balarama (Lord Krishna’s elder brother).

There are several other shrines within the temple complex, including the ones for goddesses Lakshmi, Satyabhama, Jambavati, and Radha.

Shrines of sage Durvasa, Balrama, and Madhav Raoji can also be seen in the region. In front of the main deity, there are two more shrines dedicated to Devaki and Radha Krishna.

Dwarkadhish Live Darshan gives anyone opportunities to see the almighty sitting anywhere in the world.

However, to get Dwarkadhish darshan, you can consider visiting the temple between 6:30 AM and 1:00 PM during the first half of the day and between 5:00 PM and 9:30 PM.

These timings may change during festivals or special days. Devotees are advised to check the Dwarkadhish temple official website or call the temple office directly and verify.

To have Dwarkadhish darshan, devotees are recommended to come between November and March.

This is because celebrations are also in full swing during Janmashtami. So, devotees can plan Dwarkadhish darshan during this time.

This web portal can be accessed by devotees anytime and from anywhere to get information related to the temple, Seva timings, festival calendar, and a lot more.

Additionally, if you wish to have Dwarkadhish live darshan online, then you need to visit the official website of the temple.

However, make sure you’re at a place that has a stable and fast internet connection to access darshan uninterruptedly to have Dwarkadhish Live Darshan.

Dwarkadhish live darshan online is a useful and highly recommended way to have the darshan of the Lord when you’re based far away and cannot visit the temple physically for whatever reason.

Furthermore, the Dwarkadhish temple’s official website presents several other valuable information that can be collected by the devotees to help themselves bring closer to the Lord.

The Dwarkadhish temple online booking facility also has been activated by the temple authorities.

Through this facility, devotees can donate online towards maintenance and renovation activities of the temple.

Every donation you make towards the temple fund is exempted under section 80 G of the Income Tax Act.

The current pandemic has prompted many devotees to use this facility for requesting their preferred Sevas or bhogs to the deity.

The Dwarkadhish temple official website allows online users to access all the details about sevas and bhogs so that they can make an informed decision.

Through the official website of the temple, devotees can also make online transfers.

The Dwarka Mandir has a lot of renovation and development works going on.

All the details of these project work, including the present and future ones, can be found on the Dwarkadhish temple official website.

All these features and links are made available to the users to strengthen and promote the temple activities and ensure Dwarka Mandir’s sacredness.

Everything is fair in love and war