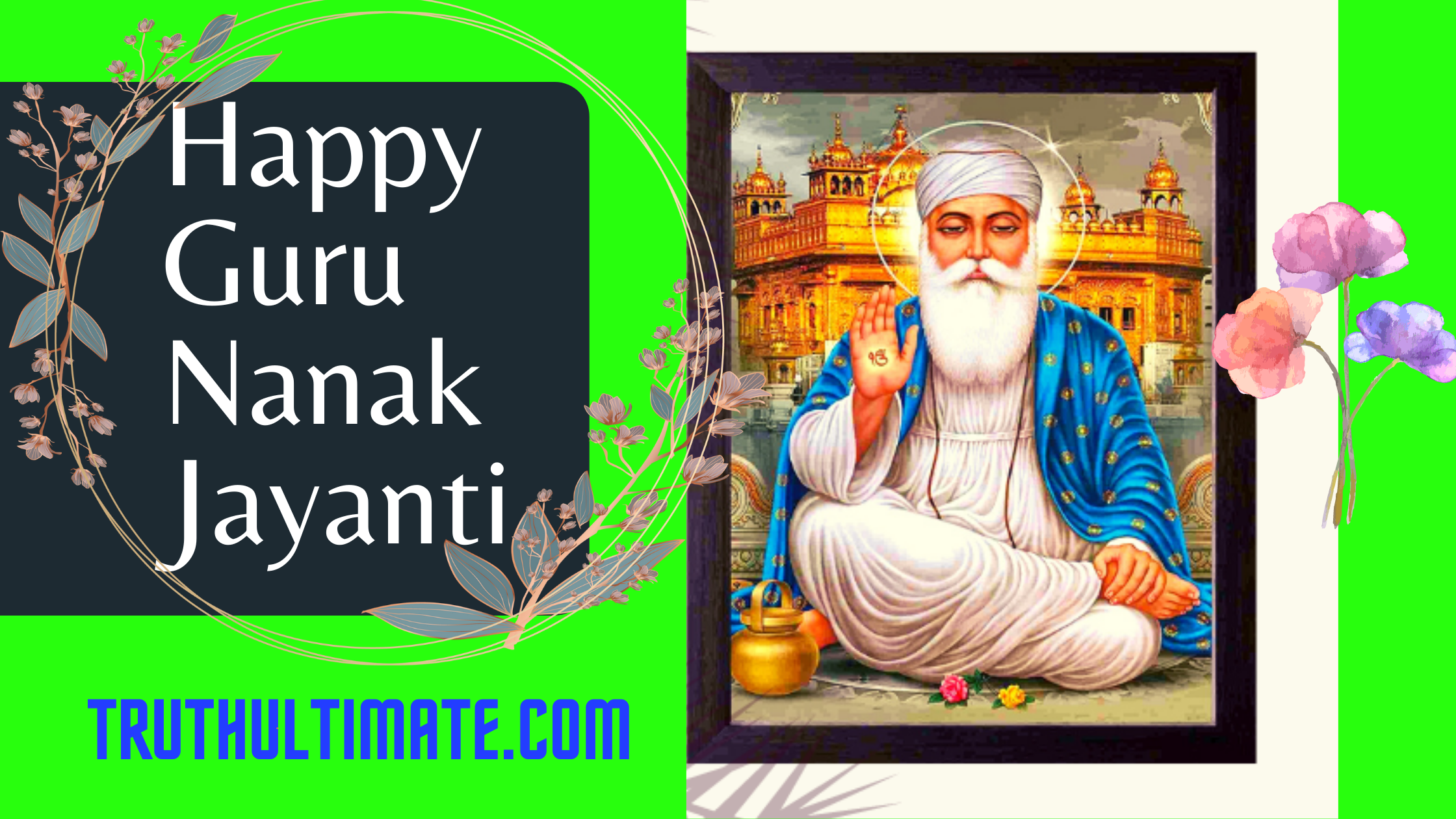 The birth anniversary of the first Sikh Guru is observed across the country as Happy Guru Nanak Jayanti.

This special occasion is a happy one as the Sikh community comes together and celebrates. Langar is arranged for all devotees who visit the gurudwaras and offer their prayers.

Happy messages and wishes are circulated among people and the teachings of the Guru are revered on the eve of Guru Nanak Jayanti.

Born on 15th April 1469 in Talwandi, a Western Punjab village, Guru Nanak was the founder of the Sikh religion.

He was born into a Hindu family and had friends from Hindu and Muslim communities since the beginning.

At the age of six, his accountant father Mehta Kalian Das sent the young boy to a school teacher in the village to study mathematics and Hindi.

An unusual child, Guru Nanak was always inquisitive about life and often spent several hours meditating and engaging in discussions with Hindu and Muslim people who lived in the forest area surrounding his village.

Guru Nanak is believed to have traveled to multiple places across Asia and spread the message of one God or “ik onkar”.

He believed in the concept that the eternal truth exists in every creation of God. With such a concept, Guru Nanak established a platform based on goodness, fraternal love, virtue, and equality.

All the wordings of Guru Nanak have been registered in the form of 974 shabda or poetic hymns in the Guru Granth Sahib, the holy text of Sikhism.

The important beliefs of Sikhism, as mentioned in the holy scripture of Guru Granth Sahib, mention meditation and faith in the name of one creator.

The scripture also highlights the importance of exhibiting honest conduct, striving for the prosperity and benefit of all, and engaging in selfless service.

All the gurus of the Sikhs after Guru Nanak have penned down their writings after identifying themselves as Nanak.

Therefore, Sikhs believe that all their gurus possess the divine light and strengthen the doctrine as highlighted by Guru Nanak.

Guru Nanak Jayanti falls on November 8 in 2022 on Wednesday. This day marks the birth of Guru Nanak, the first Sikh guru.

Guru Nanak Jayanti is one of the most important festivals for Sikhs. The celebrations start with Prabhat Peris.

One of the biggest festivals of the Sikh community, Guru Nanak Jayanti is celebrated across several states in India with a lot of devotion and zeal.

As a part of the celebration, devotees visit gurudwaras, decorate their houses with lots of candles and lamps, and prepare several dishes.

However, for people who are far away from their near and dear ones, there are ample quotes and messages that can be used for wishing one another and making the festivities more special than before.

Given below are some of the wishes people commonly use during the time of Guru Nanak Jayanti:

On the day of Guru Nanak Jayanti, the celebrations begin early in the morning, about 4 to 5 am.

During this time of the day, morning hymns or Asaa-Ki-Vaar are sung and this is immediately followed by Katha and Kirtan.

These events are followed by the langar that is arranged by the volunteers at the Gurudwara. Some gurudwaras also hold night prayers.

Rehras are recited around the sunset and this is followed by kirtan till the end of the day. Till about 1:20 am the congregation remains busy singing Gurbani.

Incidentally, this is the birth time of Guru Nanak. At around 2:00 am, the celebrations culminate.

Guru Nanak Jayanti is one of the major festivals of Sikhs and is celebrated on the birthday of Guru Nanak Dev. In the year 2022, this festival falls on the 8th of November.

On the day of Guru Nanak Jayanti, people offer their prayers at gurudwaras. Sikh people come out in large numbers and take part in the procession named “Prabhat Pheri”.

These refer to non-stop reading of Guru Granth Sahib for a couple of days.

Sikhs also carry out the procession called “Nagar Kirtan” on the day of Guru Nanak Jayanti. People congregate at Gurudwaras and offer food to devotees who visit the shrine.

Sikhs also decorate their homes with candles and lamps on the eve of the festival.

Sikh men also carry out “Gatka Demonstrations”, a form of martial arts that is exclusive to the Sikh community.

The unique thing about this art form is that it is carried out by men using traditional weapons.

In Sikhism and according to Sikh people, there doesn’t exist theories surrounding incarnation in the religion.

In Sikhism, there only exists the concept of Guru. A guru is one who possesses a spiritual soul. Guru Nanak Jayanti is celebrated not just in India but also across the world.

Guru Nanak Jayanti falls on the full moon day of the Karthik month every year.

On this auspicious day, people clean gurudwaras and decorate them using beautiful flowers, lights, and ribbons.

As Guru Nanak Jayanti is a national holiday, most government offices, schools, colleges, and even businesses remain closed in many places in the country.

Guru Nanak Jayanti will be celebrated on 8th November 2022. This day holds significance in the Sikh community as it marks the birth anniversary of Guru Nanak Dev Ji.

Guru Nanak Jayanti is remembered by people in the form of Guru’s teachings, ideas, and noble works.

The younger people know about the importance of the festival, the more are the chances of them imbibing the good values that were preached by the Guru.

Therefore, this important day should be earmarked for not just lighting candles and diyas and distributing sweets, but it should also highlight the teachings and messages that were conveyed by Guru Nanak Dev Ji.

Why is Guru Nanak Jayanti Celebrated?

Also known as Guruparab, Guru Nanak Jayanti is one of the major festivals in Sikhism.

The festival is celebrated to commemorate the birthday of Guru Nanak Dev, the first Guru of the Sikh community.

The festival is celebrated in the Karthik month of the Hindu calendar on the day of Kartik Poornima. Usually, this festival falls in November of the Gregorian calendar.

Guru Nanak Jayanti is a national holiday in some states in India. In 2022, the festival will be celebrated on 8th November, Tuesday.

Guru Nanak’s birthday is also known as “Prakash Utsav”. Being a national holiday, most educational institutes, government offices, shops, and other establishments remain closed at most places in the country.

What is the Message of Guru Nanak Jayanti?

There are several messages young and old people can adopt from an important festival like Guru Nanak Jayanti. Given below are some of them:

EQUANIMITY OF MIND: THE BEGINNING OF AWARENESS