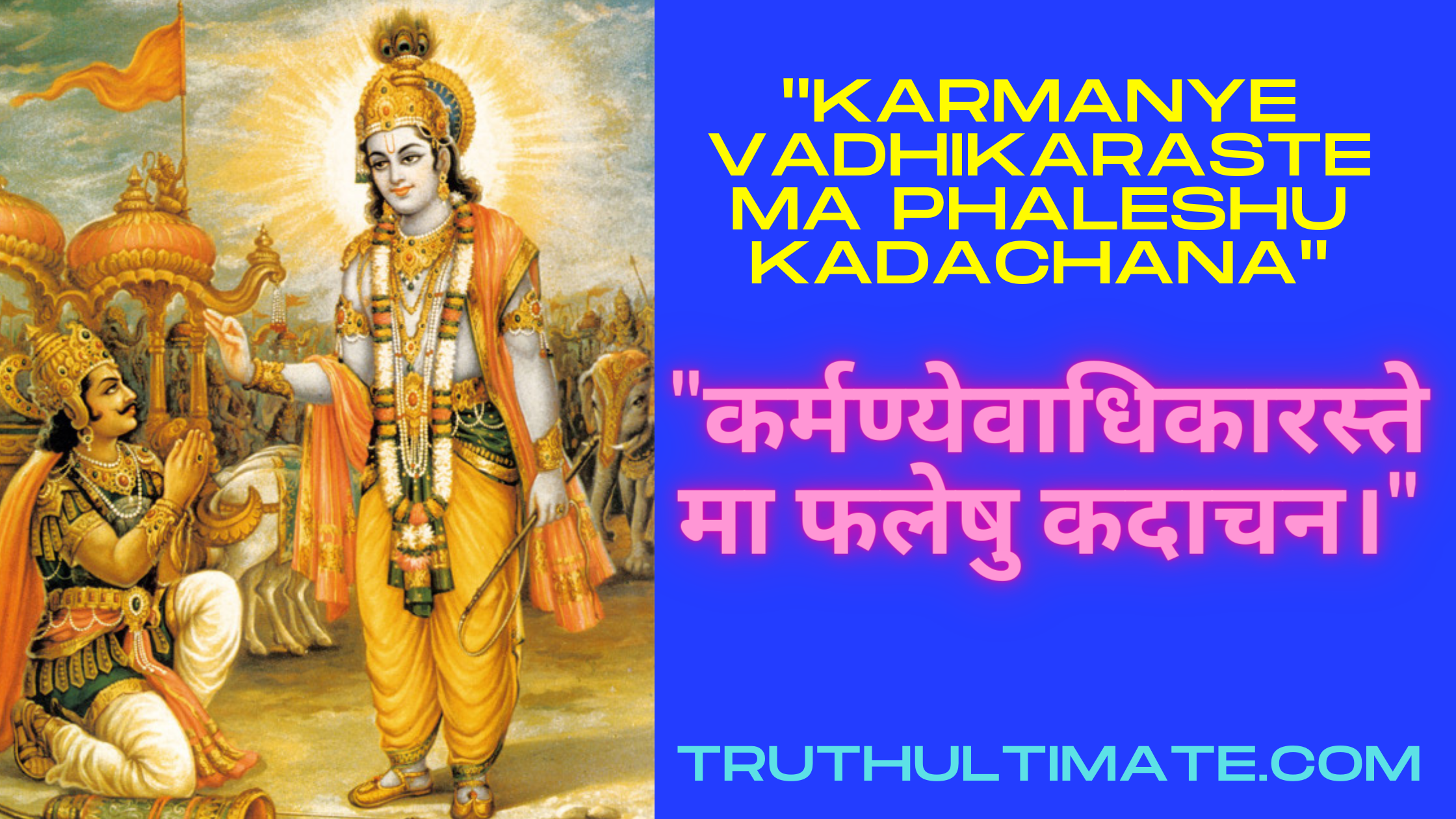 Karmanye Vadhikaraste Ma Phaleshu Kadachana | कर्मण्येवाधिकारस्ते मा फलेषु कदाचन is not merely shloka of the holy scripture Bhagavad Gita rather one of the greatest motivational quotes ever for the entire humanity on this universe.

We have seen many slokas and excerpts from the Bhagavad Gita getting famous because of how relatable they are in the modern world.

Bhagavad Gita is not just the Holy book. It can guide you through the difficult phases of life.

Moreover, Bhagavad Gita might be an ancient scripture, but the relatability with modern times can surprise you.

The Bhagavad Gita provides solutions and direction to human life difficulties, as well as equipping you with the wisdom and bravery to live confidently in any part of the globe.

Many Bhagavad Gita readers believe that if you read and understand one sloka of the Bhagavad Gita per day, you would be free of all grief and enlightened.

We all know that sadness and grief are prevalent so much nowadays, and in these difficult times, you can look towards the Gita for guidance.

Karmanye Vadhikaraste Ma Phaleshu Kadachana is a popular sloka of the Bhagavad Gita as it is the starting line in Bhagavad Gita’s chapter-2 verse-47.

There is some struggle and some pain necessary behind every successful story.

Hence, we all need to put forth the best of our energy and efforts to get the fruits, and if we are not doing it whole-heartedly, it’s a waste.

Similarly, Karmanye Vadhikaraste Ma Phaleshu Kadachana from Bhagavad Gita also says that you don’t need to worry about the fruits before preparing to do any work.

Obviously, that doesn’t mean that don’t strive for achievements and fruits. Do that, but don’t make it the primary focus and goal.

You should never be inactive, and instead, we should work to bring out the best.

You have the right to work only but never to its fruits.

Let not the fruits of action be your motive, nor let your attachment be to inaction.

If we look at the meaning of the whole Karmanye Vadhikaraste Ma Phaleshu Kadachana sloka and break it into parts, you might be able to understand it better.

Some people write karmanye vadhikaraste as two words, and some write it combined as karmanyevadhikaraste.

Let’s clear all the confusion out as both are fine. But, it’s better that you write it the latter way, as it is in the original text.

It basically is a joined word called Sandhi. (Karmaya+eva+adhikarah+te) is how it is pronounced when written combined.

You reserve a privilege to play out your recommended obligation, however, you are not qualified for the products of activity.

Never believe yourself to be the reason for the consequences of your exercises, and never be connected to not carrying out your responsibility.

You reserve the option to play out your activities, yet you are not qualified for the products of the actions.

Do not let the organic product be the reason for your activities, and thusly you will not be joined to not doing your duty.

This message was from Lord Krishna to Arjun during the Epic War of Mahabharat when Arjun was not able to battle.

Considering that he had the inverse of him, that a large number of people he considers to be his own.

Arjun says to Krishna, what’s the utilization of battling against my own for simply a real estate parcel.

What joy will I get by killing my dears? The ones on different sides are my own uncle, my cousin. Would I submit wrongdoing?

What will I get by killing every one of them? Rather I would have favored that they kill me here itself.

Then Krishna discloses to him about his obligations. The above section, which is among the most renowned refrain in Mahabharat, is one of that clarification he has given.

For this situation, Krishna lets Arjun know that regardless is the aftereffect of the conflict, he ought not to be stressed over it.

His obligation is to battle; then, at that point, he needs to battle.

He wins or loses that isn’t significant. Regardless of whether he bites the dust during the conflict, he will accomplish paradise since he has effectively played out his duty.

Now going to the second expression of the above sloka, Krishna likewise prompts Arjuna.

At the end of the day, he shouldn’t stress over triumph or rout. One side has to lose; hence he should be impartial with regards to it.

In basic terms, it implies, keep on playing out your obligations without being appended to the aftereffect of your activities.

Possibly you get something, or you get nothing; you ought not to stress over it. You ought to have impartial behavior.

If we take an example of a student, he must study only; he passes or fails that is not in his control.

The student doesn’t read up only for finishing his tests; he should study for the learning.

Regardless of whether he passes or fails, he ought not to be too cheerful or so pitiful.

If at any time the student reads up for the sole reason for breezing through his tests, in the end, he has not mastered anything regardless of whether he has passed.

In any case, assuming he studies since he thinks about learning and examining as his obligation, he will not be concerned whether he will pass or fizzle.

Also, such a student as we have consistently seen they are probably going to breeze through their tests.

Except if they can’t arrive at their test for reasons unknown.

Yet he ought not to be tragic with regards to it. Why? Since the most significant is essentially he played out his obligation well.

We can likewise relate this to benevolence, as when we help somebody, we don’t do it for something; consequently, whether or not we are compensated for our activities, this isn’t our worry.

Also when we help somebody without stressing over our own benefits, this is magnanimity.

Lord Krishna already preached to the world that human beings can not sit idle. Even Lord himself would had finish the war of Mahabharata in a moment.

However, he lets all to perform each one karma. Karmanye Vadhikaraste Ma Phaleshu Kadachana gives the message and ideals to the generations to follow the right dharma.

If one gets birth here he must have to work-this is the eternal order of the universe.

It is philosophically believed that everyone comes here to play his role and return back.

Each one’s karma is scientifically bound by the cause-effect theorem. Each karma has two direct results either liberation or bondage.

If you perform any karma with intention of its fruits- it leads to the bondage of this world.

Here you also do one blunder that you being a creature wants to be the creator by holding the fruits.

You always want to get the desired fruits exactly as you wish as a creator.

On the other hand, if you perform any karma without any worry of fruits-it leads to liberation.

Here you perform karma as your duty and completely surrender it to the almighty or the creator of the universe.

It is like a servant of a shop running the shop the whole day and in the evening he surrenders all the money to his master and forgets.

This seems most difficult, however, the great yogis and masters are like the servants of the shop who completely surrenders everything.

The master is infinite and limitless and so he bestows the rewards to the servants in unexpected and much greater ways.

Sometimes it seems magical for normal human beings and we call those masters and yogis legend on this earth.

HOW TO LIVE IN THE PRESENT MOMENT