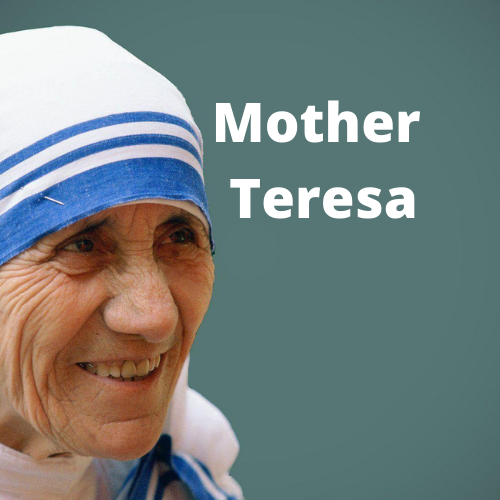 Mother Teresa was the most humble and down-to-earth noblewoman that ever lived on this planet. She was an Albanian-Indian Roman Catholic nun who dedicated her entire life to the help of people in destitution and suffering. She received thousands of honors, including the Nobel Peace Prize and the honor of a Saint. She is still remembered whenever the name of any charitable work comes up for humanity.

Who is Mother Teresa?

Mother Teresa was a nun and a missionary, whose entire life was about the help of those in need. She was the founder of Missionaries of Charity. This organization was active in around 133 countries by the year 2012. The sole purpose of this organization was to help the suffering humanity by providing the diseased ones with shelter and food. Many dispensaries, orphanages, and schools were also a part of this huge organization. Mother Teresa is widely admired for her charitable works and love for humankind.

Mother Teresa’s real name is Anjezë Gonxhe Bojaxhiu. It’s her Albanian name which means “rosebud or little flower”. She is also known as Mary Teresa Bojaxhiu. This name came from when she decided to became a nun and joined the Irish Order Sisters of Loreto in Dublin. Here, she first took the name Sister Mary Teresa after Saint Thérèse of Lisieux. After completing her final vows she became the famous Mother Teresa.

Mother Teresa was born in Skopje, the Ottoman Empire-  now the capital of North Macedonia. She belonged to a wealthy Kosovar Albanian family. She lived in Skopje for eighteen years. Later, she moved to Ireland and then India. Here, in India, she lived most of her life and even died there.

Mother Teresa was born on 26th August 1910. But, she considered her true birthday on the day she got baptized which is the 27th of August. She was born to the Albanian parents Nikolle and Dranafile Bojaxhiu. Her father was a merchant of gold, tobacco, and medicine. She had every comfort from the very start yet still she considered all these worldly treasures insignificant.

From her early age, she fascinated the lives of missionaries. By the age of 12, she had made her mind to devote herself entirely towards religion. To fulfill her dream, she left her home at the age of 18 to join the Sisters of Loreto. Thereafter, she never returned and never saw her family again.

In 1929, she came to India and began her novitiate in Darjeeling, lower Himalayas. Here, she learned Bengali and took her first religious vows on May 24th, 1931. In 1937, she took her solemn vows while she was teaching at a school in Calcutta. Although, she loved teaching she left it to devote herself entirely towards the cause of helping humanity. In 1950, she founded Missionaries of Charity and went on with the work of the charity.

She adopted the citizenship of India and received basic medical training at Patna’s Holy Family Hospital. She founded a school at Motijhil, Kolkata. Later, she formed a Kalighat Home For Dying- every poor, diseased, and needy was welcome to have a shelter there.

She spoke many languages like Albanian, Bengali, Hindi, Serbian, and English. She was a front-line warrior in many wars, hospitals, and natural calamities.

After struggling with many health issues including cardiac problems, malarial, and pneumonia infections, her health declined day by day. On 13th March 1997, she resigned from the post of head of Missionaries of Charity. Later, in the following year, she took her last breath on September 5th.

She received a state funeral by the Indian Government. And her death was deeply mourned by people all around the world. She is now buried at the Mother House of the Missionaries of Charity in Kolkata, India.

Mother Teresa and The Nobel Prize

Mother Teresa received many prestigious awards in her entire life. Her prizes and honors include,

The most important among all these was the Nobel Peace Prize 1979. She received this prize for her selfless dedicated struggle to overcome poverty and for bringing help to the suffering humanity. When Teresa received the prize, people asked about how to achieve world peace? She said,

“ If you want to change the world, go home and love your family.”

Mother Teresa was a helping soul by birth. She loved humanity with all her heart. She was an unbiased, devoted, and selfless lady- who treated everyone equally with love and care. Mother Teresa helping the poor, the diseased, the needy, and the vulnerable despite their faith, color, and caste, is the biggest example of humanity that exists.

Mother Teresa’s quotes and sayings reflect her true personality. Some of these are,

Mother Teresa’s name will always shine among the selfless and humanitarian people that ever existed. She was a classic example of humanity, love, and care. People like her have pure hearts and are especially sent by the Almighty as a gift to His men.

How to avoid procrastination: 10 secret facts