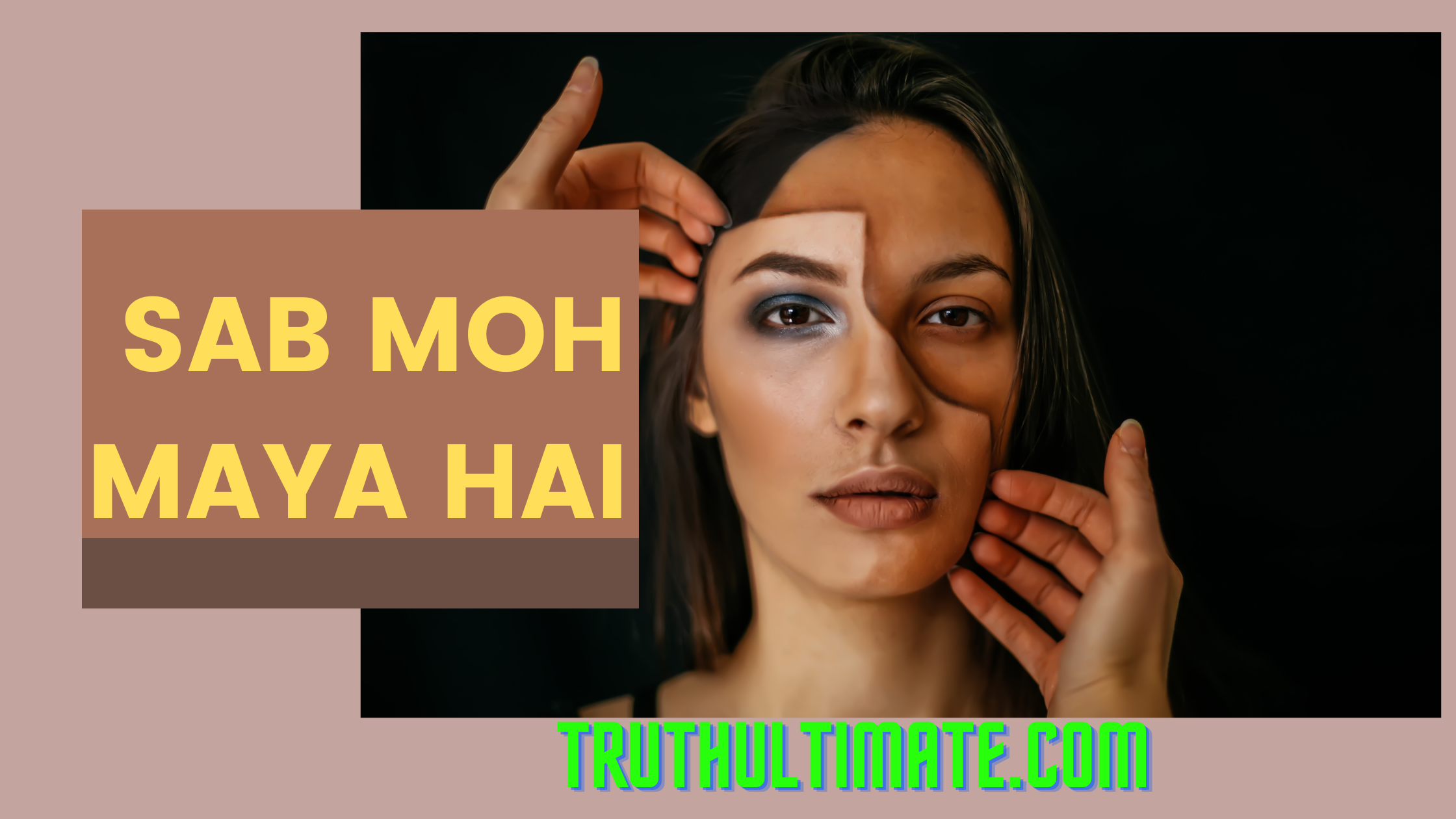 Sab moh maya hai is a great spiritual and philosophical shloka used by the masses which implies that “all attachments are mere illusions.”

The moha along with raaga (cravings) and dwesha (aversion) have been considered a barrier to salvation or Moksha. The moha is nothing but attachments toward the worldly or materialistic world.

The Maya of Hindu mythology corresponds to the Mara of Buddhism. The Maya or mara literary implies the illusions which hinder the Ultimate Truth.

The entire creation of this universe is based on the principle of dualism or dvait. The day and night, truth and untruth, dharma and adharma, light and darkness, happiness and sorrow, etc.-all do exist simultaneously.

The truth symbolizes the ‘Supreme Reality’ while the untruth represents the Maya or mara.

The scriptures believe that all this world we see is a mere reflection of maya. This world is a mere illusion, however, it seems perfectly real.

The veil of Maya is so perfect that everyone around us seems always in pursuit of desires or cravings.

Very rare human beings on this earth found able to reveal the secret of Maya and attained Enlightenment or Nirvana.

Lord Buddha before attaining enlightenment became able to all his countless past lives. The Jatak tales are the collection of all the past lives of lord Buddha.

In all the past life’s destiny was similar from birth to death. Lord Buddha realized that in every life he got birth, grew, got married, attached with desires of worldly or materialistic life, became old and sick, and finally waited for death to come.

But he make a vow that in this life he would break this cycle of moh-Maya and ultimately became successful to attain Nirvana or Moksha.

However, all human beings do not get affected by the teachings of Lord Budhha. The illusion of Maya is so dominant that all of us have always been part of the great “Rat Race.”

Kabir was an enlightened saint of medieval India, however, his teachings were revolutionary and still relevant in this modern world.

Kabir revealed Maya as Mahathagani which implies Maya is a big stealer. No one here is escaped from this Maya.

Maya is also mahapapini which implies maya is a great sinner and propels human beings to commit all sins.

Buddhism acknowledges maya as mara and there are several stories associated with it.

The Buddhist scriptures say this world is ruled by Mara and Mara creates illusion and barriers to human beings languishing in the cycle of life and death.

Mara tries to divert humanity not to reach Nirvana or salvation. If people of this world start to attain Nirvana then there would be no role for Mara.

When Lord Buddha tried to go in search of Nirvana, Mara appeared before him and offered him not to leave.

Mara also offered Lord Buddha that he will make him the supreme ruler of the world. However, Lord Buddha denied the offer and moved on.

On the night of Vaisakh Purnima when Lord Buddha was about to attain Enlightenment, Mara again appeared and threatened him.

Mara told to Lord Buddha “this world is mine and I run this world with greed, jealousy, fear, ego, sins etc. with all the negativity.

This place is not for you or a person like you. If suppose you got enlightenment, who will be the witness of it.”

Lord Buddha did not react a bit and ignored Mara completely which is also known as “Upekkha” in Buddhism.

Lord Buddha indicated his one finger and touched the earth which greatly implies “the earth is my witness.”

The creation of the world is so watertight that maya creates great illusions. This great illusion hinders Braham to known himself that he is the true Brahman i.e, “Aham Brahmashmi.”

Aham Brahmashmi is the great teaching of Upnishada and Hindu scriptures which curtails the veils of Maya and paves the path to union with the Supreme Brahman.

Maya has different forms we can see around us. Untruths or asatya, jealousy, greed, cravings, violence, fear, sins, immoral acts, adharma, etc -are all forms of maya.

Being in this world, we can not rule out Maya completely as Maya is part and parcel of this worldly life.

However, with the help of wisdom or vidya, we can be on the right path with balancing our life.

All the scriptures and spiritual gurus unanimously teach us about truth, morality, non-violence, generosity, sacrifice, and right livelihood to mitigate the effect of mighty Maya and attain at least bliss or joy in our life rather than Nirvana.