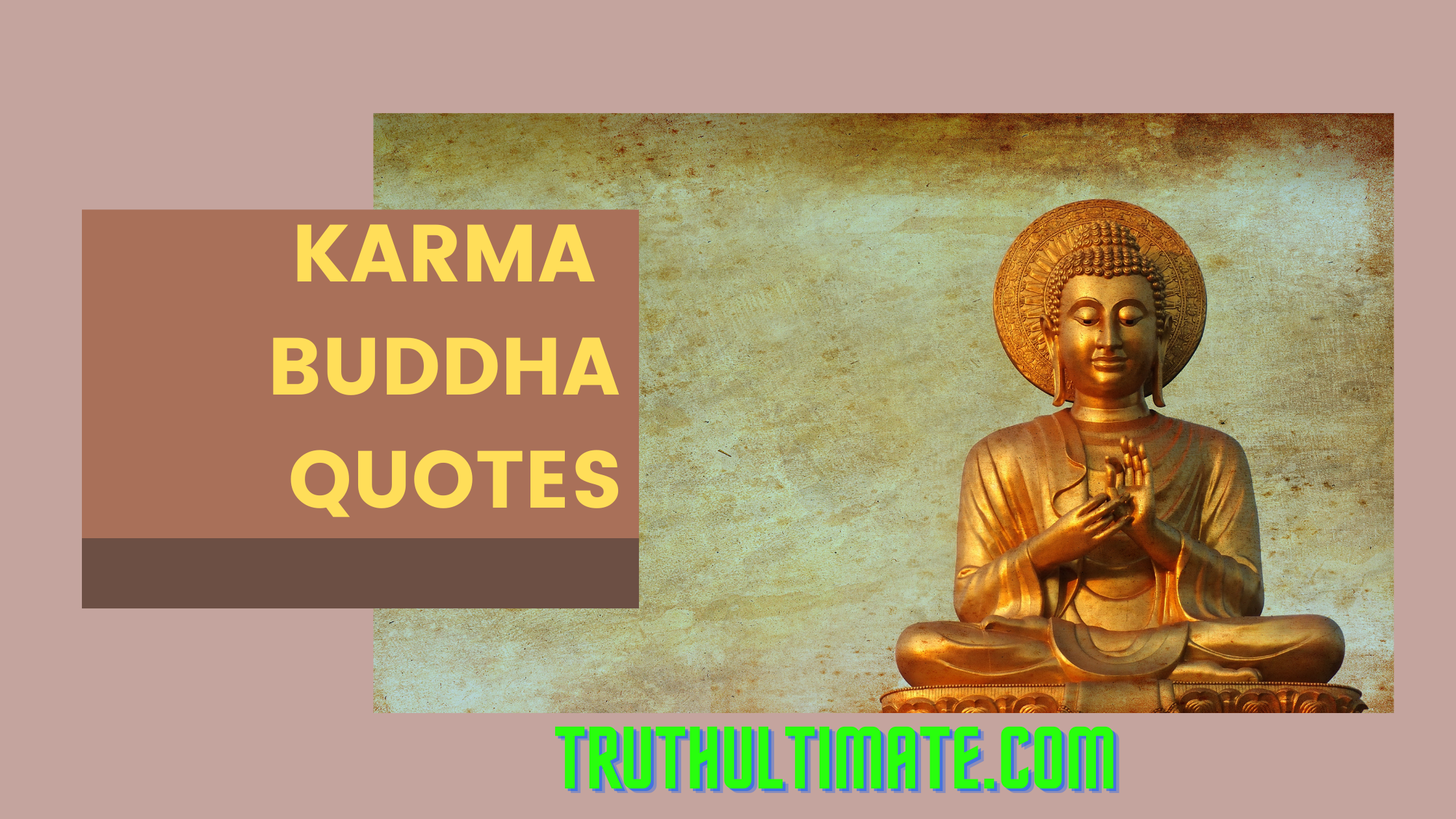 Karma Buddha quotes find the most important position in the teaching of Lord Buddha. The theory of karma is one of the principles of the highest value in Buddhism.

Karma signifies the action or doing. Every creature of this universe including human beings are bound to do karma.

Karma Buddha quotes believe that karma determines our destiny and even the cause of rebirth.

Law of cause and effect

Every phenomenon of this universe is bound by the universal Law of cause and effect.

The cause and effect theory believes that each effect is the result of a specified cause. Nothing happens in vain or without reason.

The law of cause and effect finds an important discussion not among Buddhism but rather in the rationalist and scientific community too.

Karma Buddha quotes suppose that every result in our life is directly or indirectly a result of the accumulation of our past and present karma.

In the holiest book Dhammapada states that

“not in the sky, nor in mid-ocean, or entering a mountain cave is found that place on earth where one may escape from

(the consequences of) an evil deed”.

Lord Budha preached to the followers and common men to be vigilant and aware of the karma they perform.

The karmic consequences are the most certain things going to yield the fruits at the time of ripening.

Sometimes it is seen in a society that people who indulged in bad karma are more prosperous while the good people seem to suffer.

However, this is not valid, the karmic consequences bring their result as sure as the sun rises.

The karmic consequences also provide to opportunity to reform this life along with further life by doing the right action or good karma.

Karma is done not only by our actions but rather being performed at all three levels-thoughts or mind, words, and action.

Karma firstly is done at the thoughts level of the mind. This karma is the most crucial, however, utmost neglected one.

People do not understand the key factor here. Suppose someone did not abuse anyone physically, however, he used to abuse him mentally.

He thinks that he did not commit any bad karma. However, the mental karma of abusing someone will bring a similar result to physical karma.

Hence, karma Buddha quotes emphasize that human beings must have to be vigilant and aware of any form of karma being performed.

Law of Intention behind Karma

The karma is crucial however the more crucial is the intention behind the karma. Each karma in this universe is propelled by its intention.

The intention behind karma brings fruits of its own karmic consequences. The incidents or karma look similar however because of intention it will bring different results.

A thief robbed a commuter, stabbed the knife, and killed him. On the other hand, a doctor tried to operate on a person to cure him with a similar knife, however, the patient could not survive and ultimately died.

The intentions behind both incidents are different and hence karma will bring different results in life.

Lord Buddha before getting enlightenment on the night of Vaisakh Purnima became able to know his countless past lives.

Jatak tales are a great collection of his numerous previous lives. Buddhism strongly believes in the concept of rebirth as Hindu and other philosophies.

Lord Buddha acknowledges that it is our karma that decides our rebirth. The nature and account of our karma decide our next birth.

Karma Buddha quotes assume that our good and bad karma determines our next birth and its destiny.

The Hindu philosophy believes it’s the soul which leaves the previous body and as per the karmic consequences gets another life.

However, in Buddhism, there is no concept of the soul, its Chitta contains all the previous sanskara which leads to rebirth.

Karma Buddha quotes believe that if anyone is able to destroy all the sanskara (craving or will) and get liberation in this very life, he would be free from the cycle of birth and death.

The Nirvana or the Moksha

Lord Buddha propounded that nirvana or moksha is a reality in this very life rather than in other life.

Buddhism postulates nirvana as being blown out of a lamp or getting enlightenment ceasing all suffering and being free from the cycle of rebirth.

When someone like Buddha becomes able to be free from all the impurities of Raag, Dwesha, and Moha, it leads to the awakened state and paves the path to nirvana or moksha.

The Hindu and other philosophies assume nirvana or moksha is only possible after death.

However, the greatest honor goes to Lord Buddha who showed that nirvana could be attained in this very life.

Nirvana is believed as the ultimate state of pure joy and bliss and the end of all kinds of suffering in this mortal world.

Lord Buddha should be worshiped because he showed the path that any human being on this planet by his Karma and Purushartha can attain the status of Nirvana or Moksha.