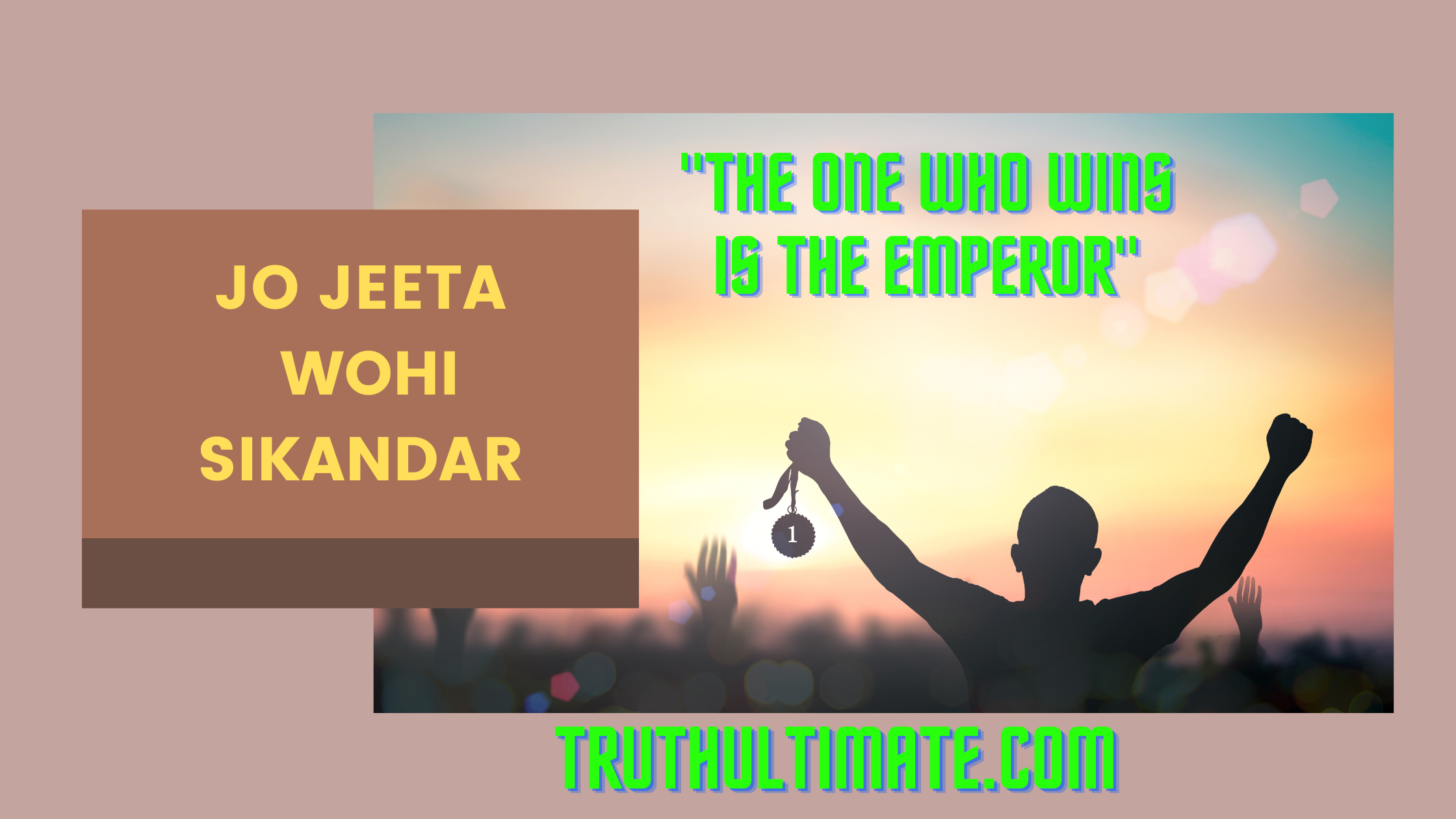 Jo jeeta wohi sikandar is one of the most famous slogans being used for the winners in any field of life. Jo jeeta wohi Sikandar literally means that “The one who wins is the emperor”.

Life is considered a race as well as a struggle for the majority of human beings. Is life really a race and struggle?

Lord Buddha around two thousand five years ago preached that till the existence of this world the sufferings would prevail in numerous forms.

He preached in the sense that the destiny of a human being is similar to every birth. Human beings get birth, grow, get married, reproduce, get older, get sick and one day find waiting for death to come.

For an ordinary human, being life is a race full of struggles and suffering. Lord Buddha not only preached about the existence of suffering but rather showed the path to end this suffering.

However, the majority of human beings are not able to know this path of liberation. Human beings find themself languishing in the cycle of sufferings between birth and death.

For such human beings life is a race where only success does matter and nothing else. Everyone is finding themselves in this rat race.

Everyone is trying to surpass others to be first in the race. The race has become a cutthroat competition. And that is the prime reason life has become a great struggle for them.

The traditional education system and our social condition have turned this beautiful life into a path of struggles.

Jo jeeta wohi sikanndar assumes that the one who has won is the emperor and the rest are the losers.

The situational approach to success declares that success and failure are the results of a situation or circumstances.

Leaders and great men are made and destroyed by the circumstances. Sometimes the situation or circumstances favors and sometimes become against and it ultimately decides or success and failure.

The analyst calls it situation or circumstance, however, the astrologer believes it as the lines of destiny.

History is also selfish in its account. History only remembers the Sikandars or the Winners and forgets the losers and the role of circumstances.

Jo jeeta wohi sikandar or the one who wins is the emperor greatly emphasizes success is the zenith of life at any cost.

However, the notion of success in life is a relative concept. The meaning and scope of success vary from one person to another.

People believe that getting excellence in grades, getting handsome paychecks, and getting power and authority in society is the symbol of success.

There are several examples of human beings who were excellent in grades but were highly failed in life being depressed or committed suicide.

History had witnessed numerous human beings being successful in the eyes of society, however, found themselves miserable and disgraced the entire humanity by their wrong acts or bad karma.

Life itself is the great gift of this great universe. To live this life to its fullest possibility is the greatest success for the entire humanity.

Numerous dropouts in history made exceptional success in different filed of life. Dr. A P J Abdul Qalam was unsuccessful as a pilot however greatly successful as President and a great humanitarian.

Sachin Tendulkar was a dropout, however, one of the most successful cricketers of all time.

Superstar Amitabh Bachhan was unsuccessful as a radio anchor however, became successful as a Millenium superstar. Hence success has no boundary and it is limitless.

The great scripture Bhagavad Gita teaches the whole world about the Nishkam Karma or to perform your duty without the intention of the result.

Success and failure are not in your hand. The only thing in your hand is the only Karma or your duty.

Lord Krishna, Himself preaches to the Warrior Arjuna without being attached to the success and the failure to perform his duty.

Hence, do not mingle whether you will get success or not, you must perform your duty. If your duty is right and honest, surely you will get rewarded.

Everything is fair in love and war is the old age saying which justifies jo jeeta wohi sikandar or the one who wins is the emperor.

Now it is proved with evidence from history that everything cannot be fair in love and war.

This old age saying had already disgraced humanity as millions of people had been killed in the name of the war.

Numerous sins and misconducts are happening every day around the world in the name of love.

Jo jeeta wohi sikandar can not be right and truthful because it tries to justify the success at any cost.

Jo jeeta wohi Sikandar movie released in the 90s was one of the most successful box office collections starring Aamir Khan, and Ayesha Jhulka.

The movie was produced as well as written by Nassir Hussain while directed by the great Mansoor Khan.

The movie with its release became the heart vibes for the youths. Still, the movie finds its loveliness and binds the audience to watch again and again.

The theme and plot of the movie were similar to get success at any cost.

The movie dwells inspiration to youth that only hard work and commitment can lead you to success.

It also teaches that you should not escape from your duty and perform the assigned duty with honesty and in the right way.