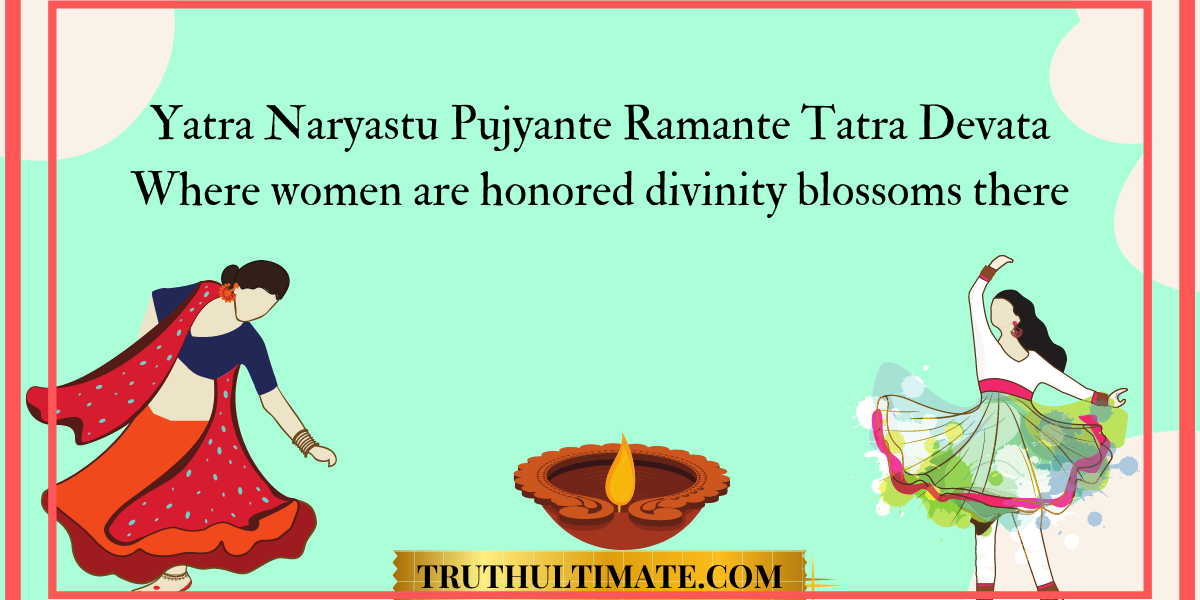 This whole sloka highlights the importance of women in our society.

It highlights the importance of how women should be treated with dignity and respect.

It points toward the divinity of what women bring to our life.

The sloka highlights that our good deeds don’t matter if we aren’t good to the women in our lives.

Women bring blessings to the home and bring prosperity to the nation.

We are part of a patriarchal realm where it is believed that men have shaped society as they like.

It is also considered that men have created hurdles or limitations for women for ages, hiding behind in the name of the tradition.

However, our great scriptures provided due respect and dignity to women who are an integral part of this creation.

However, the meaning is “Where women are worshiped (respected), their divinity prevails and shines!”.

This means that the nations that respect women and give them their due rights are the ones who are reaching heights.

And, the society where women are supposed to tolerate the injustices and the uneven circumstances of men is the one that remains backward.

Unfortunately, the women in our society face everything.

The rights that the modern era women are asking of men in this era have been given to us very long ago by culture and wisdom.

The tradition of India has valued women and this chant is a reminder to work towards the betterment and empowerment of women.

If the women in the society are honored, the divinity blossoms there, where society dishonors them, and all the actions remain unfruitful.

Wherever in the world and the society women are given their due respect, even the deities and the God-like reside there and where they are not respected, all actions remain unfruitful.

We have always listened that there is a woman behind every successful man, and that woman could be anyone, be it your mother or your wife.

The woman in the form of a mother teaches the child to make the right decisions.

The woman in the form of a sister helps you, guides you, and is your partner in everything you do.

When the same woman comes in the form of a wife, she brings betterment to your life and brings success.

When the same woman becomes a daughter, she is the dearest thing to you, she is a blessing and she brings prosperity to your life.

Women attract good charm to a household through procreation and hence they deserve respect and reverence.

Furthermore, they irradiate the house with their presence and there is no difference between the Goddess of wealth and women.

As we said earlier that this chant dates back to the Manusmriti, so it definitely is found in the Sanskrit language.

Here is the Sanskrit version of this chant that is found in the Manusmriti 3.56.

Meanwhile, the “y” in the Pujyante is also silent. You can say it as Puj-ante.

We hope that you have now learned to pronounce the right syllables of this chant.

Here is the transliteration and translation of the whole sloka.

Where women are honored,

And where they are Dishonoured,

We will only get the fruits of our good karma if we honor the women.

When you dishonor the women, you are almost losing everything in your life.

The patriarchy in Indian society is quite dominant for ages, and many people are still living under that old umbrella.

Millions of women are still suffering, sometimes in the name of child marriage and sometimes in domestic violence, and for many other reasons.

The verse exists in Manusmriti 3.56 and is a common chant when we want to highlight the divinity and blessings women bring to our lives.

The chant is so common and popular on International Women’s day and is quoted by many spiritual leaders.

Moreover, when our scriptures have given women all the power and rights, why does this patriarchal society stop them?

Everyone has seen some women suffering near them, and we often don’t even bother looking into the matter.

It’s a reminder for those people who think that women are submissive and are slaves.

No! they are not. Women are goddesses and symbols of power and peace.

Women are the ones who we pray and surrender to in the form of Goddess Durga.

Women are the epitome of power, as per many religious backgrounds and stories we have heard since our childhood.

Women in our society are conditioned to tolerate everything that comes their way, whether in the form of domestic violence.

They suffer predominantly from their husbands or be it in the form of honor killings by the hand of the fathers and brothers.

Fortunately, modern-day women are defying the patriarchal mindset and learning to speak, learning to ask for their rights.

These quotes highlight the importance of women and how they are a blessing.

And, the result is always the truth, and Gods have always been winning until the rise of Mahishasur.

But, what made the Gods think that women are powerful? What is the background?

The story started with Mahishasur, who was the son of Rambha (king of demons) and Mahishi.

He was born with supernatural powers and his thought of doing penance for growing his power and strength.

He finally succeeded in defeating the Gods. He prayed to Brahma, and then Brahma grants him a boon that any men or gods won’t kill him.

Then he started troubling the gods, and then the Gods closed their eyes and began to concentrate all their thoughts on creating this invincible woman.

From the combined energies of the God, they created a Goddess who would be strong enough to defeat Mahishasur.

And with their blessings, Durga then mounted the tiger and set out to destroy Mahishasur.

She approached Amravati and then let out a mighty roar that shook the mountains and created huge waves in the seas.

With all this happening, Mahasihur asked his soldier to go and check what’s happening.

The Goddes Durga then roared and told people that she is not the ordinary woman who is eager to marry him.

She then asked to leave Amravati and return to his place below the world. Mahishasur then attacked the Goddess along with an army of Asuras.

But, that didn’t stop the Durga, and she immediately created a huge troop of soldiers from her breath to fight back.

To win, Mahishasur tried all the tricks he knew, and the battle raged for nine days. But, in the end, truth wins.

With the Chakra which Vishnu had given her, Goddess Durga killed the Asura, who had taken the form of a huge buffalo.

She freed the world from Mahishasur’s tyranny, and then she was given the title of Mahishasurmardini.

This resulted in returning of the Indra and the other gods to the heavens again.

The present-day woman is no different; she can do anything to save her family.

When she is a mother, she sacrifices her own needs for his children, and she does everything for the family.

Religion has told us what the power of women is and how they are treated.

The patriarchy in the modern-day world allows the man to be dominant and harasses them.

Nobody is safe from the patriarchy; even a little girl going to school has to face the dirty eyes of people.

Even the girls getting good education seems problematic to some patriarchal views in the society.

Girls look at the stars, they have dreams and ambitions, but the path to the sky is difficult for the women in our society.

For getting good marks in society, her teacher harasses them, and when she goes for a job interview, the boss does the same to her.

Unfortunately, some people consider this as the fate of the women, but it’s not.

Women are supposed to create their own fate, not the one that this patriarchal society decides for them.

Womanhood in the ancient culture is thought to be the manifestation of divine qualities.

The women’s contribution to creating the Indian culture and the tradition divine is no less than the male counterparts.

Women are an integral part of the cultural, social, and intellectual evolution of human society.

Women in the family are instrumental in bringing good luck to the household, and they must be treated with respect and they are respectable.

The women are illuminated by their very presence, and they are a symbol of prosperity.

They are the sole managers of the household, and they are heavenly in their influence.

People who wish welfare and good vibes to their lives must respect women and give them their due rights.

You may have seen that the families who treat their women badly also suffer in one way or another.

Start the good deeds from your home, and start respecting women in your home.

Treat them equally to your sons; give them the equal things as you give it to your son.

Daughters have the equal right to parental property as sons.

Even you should safeguard the property of the woman more than the son.

In the Indian culture, there are strict punishments for crimes against women.

Women must have marital freedom, and their consent must be while marrying anyone they want to.

Human beings must respect the women who are integral parts of our lives and this beautiful creation in the forms of our mother, wife, sister, daughter, etc.