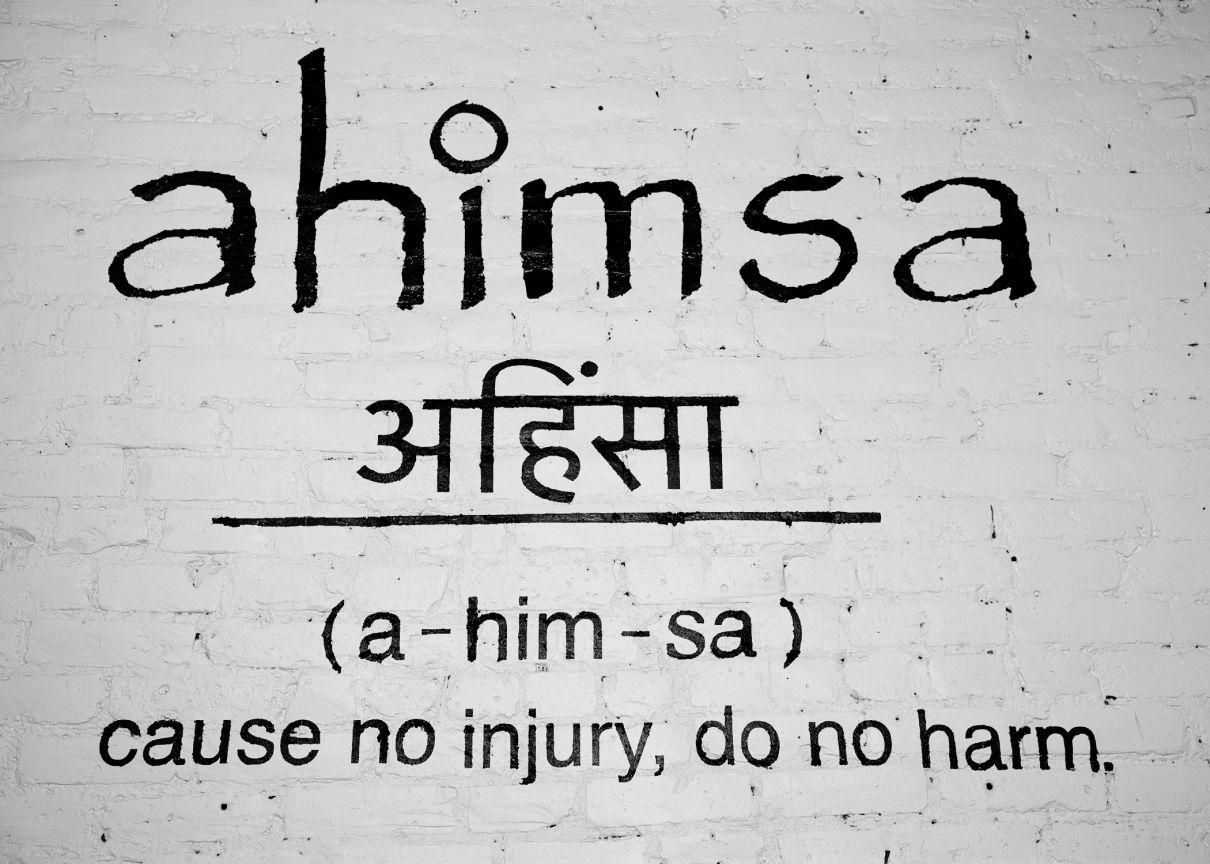 Ahimsa is one of the most important Yamas in the Patanjali Yoga Sutra. Ahimsa or Non-violence implies to prohibit any kind of violence to anyone in any form. Ahimsa has been considered an excellent norm in all religions.

Ahimsa is also highest in all moral precepts. Ahimsa is also believed as the ” Ultimate Truth“. Buddhism considers Ahimsa as an important precept of Sheel (moral obligations). Buddhism also believes that violence or non-violence affects the Karma of individuals. The practice of violence or non-violence determines the re-birth of individuals. Lord Mahavira and Jain religion pleaded Ahimsa as no other religion in the world did

Ahimsa, a Sanskrit term, is carved out from two words- ‘A’ implies non while ‘himsa’ denotes violence or harm to others. On the whole, Ahimsa describes not to harm others or perform any kind of violence, whether it is action, speech, or thoughts. All the religions of the world contain non-violence as their core teaching. In the original forms of all religion, there was no scope for any form of violence. However, in course of time, the core concepts of Ahimsa got changed in the interests of its practitioners.

In the Hindu religion, in the Rigvedic era, the term “Bali” was used to surrender or devote barley, vegetables, etc. to God. However, in course of time people used to kill innocent animals in the name of ‘Bali’ to the Almighty. The tradition is still in force causing the killing of hundreds of thousands of animals every year. Lord Buddha was a great pleader for this great teaching in his entire life. However, once he allowed a bhikkhu to accept the meat he received in the begging bowl from a family. Since then the non-vegetarian food is widely used to accept by the followers.

The Ahimsa implies not only to practice it at a physical level rather its practice at the thought, emotional, and mental level is of great importance. Generally, we think that we are not making any kind of violence at the physical level, it means we are following it.

However, if we used to abuse continuously, thinking anything wrongdoing about anyone, feeling jealous at the level of thoughts or mind- definitely it is also a kind of violence and it will also bring the bad effect of Karma. This is the crux of the practice of Ahimsa and one must have to be careful while perceiving thoughts and emotions. Awareness and mindfulness is the key to overcome and regulate such thoughts.

It is stated that “Ahimsa Paramo Dharma” (अहिंसा परमो धर्मः). It implies that Non-violence is the ultimate dharma. Non-violence is the supreme religion of the entire universe. The importance of non-violence is that we are not separated from this Universe rather we are connected with each other. The law of life is universal in nature and all are bound to it.

There is some specific law of the universe that initiates the process of creation. Our very existence is also bound to it. That’s why when we do any kind of Ahimsa, it is against this law of creation. The law of creation and destruction is universal and applicable uniformly to all of us. This is the universal law which lord Buddha termed as Dhamma.

The practice of Ahimsa is not an easy task. However, the practice of violence is quite easier because it is a quicker reaction to any action. While practicing this great Yama, one has to control one’s thoughts, emotions, and actions which needs patience and hard work. The practitioner of this great path must have great patience and commitment.

In the modern era, Mahatma Gandhi was a great practitioner of Ahimsa. During the freedom movement of India, the followers of Gandhi used to bear the pain of bamboo sticks without any mental agony charged by British soldiers. Hence the practice of this great yama is not too easy.

In the present world, the majority of the violent activities of the world are the result of our just reactionary attitude. Whenever any deviation in life arises, we become full of anger and anxiety. A small incident becomes able to seize our intelligence and wisdom. We are living the life of slavery. In such situations, sometimes we completely lose our humanity and behave like animals. If we lose wisdom and behave like animals then definitely we are downgrading the great humanity.