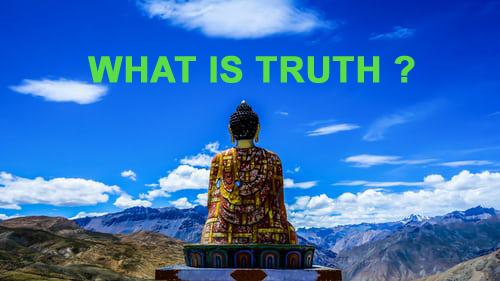 What is Truth? Since the evolution of the development of humanity, the quest for Truth has been a basis for our existence. All the cultures and scriptures have assimilated Truth as fundamental aspects of life. The concept of Panchsheel contains five basic percepts -Satya, Ahimsa, Asteya, Aparigraha, and Brahmcharya. The first basic precepts of Panchsheel theory is Satya. The remaining percepts are based on the foundation of it. For the Yogis, Truth is God. Nothing is more important or significant other than this concept.

Truth quotes are not merely combinations of words rather goldmine for the entire humanity. In Bhagavad Gita Lord Krishna firmly quotes to Arjuna- Hey, Arjuna. There was never a lack of Truthfulness in all the three Kalas(time). It is this entity, which vitalizes the universe. The complete transformation of life from Siddarth to lord Buddha is based on the truthfulness. Truth questions used to make prince Siddharth restless at a very young age. That’s why He is also known as Tathagata. Tathagata means one who quests for facts or tathta. In Buddhism, Vipassana is a specific meditation based on observing in a special way. Lord Buddha started to observe the one’s nearest truthful entity, the breathing, that paved the way to attain the ultimate knowledge.

The most important aspect is how to follow the principle of Truth in our daily life. Generally, it is believed that this implies only by speaking it. However, the concept of this is much broader than it seems. Fundamentally, it has twice connotations. First, it implies one must have to be truthful in each and every activity of life. Second, one must have to be truthful while expressing oneself. It is not be shown off, rather it must be reflected in our character. If one is true to oneself his life can change positively manifolds. No one knows better than yourself. But the irony is that you always tend to deceive yourself. If it has become part of your character no one in the world can save you.

MY EXPERIMENTS WITH TRUTH

My experiments with Truth is one of the great autobiographies of the worlds where Mahatma Gandhi, the father of the nation, being honest with himself accounted the experiments he made being truthful and its results in his life. Knowing the untruth is one of the ways to reach the opposite pole. The transformation from Mohandas Karamchand Gandhi to Mahatma Gandhi also based on the practice of Truth and Non-violence. The practice of it paved the way for him to reach the self-actualization level which is rare for a human being.

Happiness or Pleasure is the fundamental right for all human beings. However, the majority of humans are trapped in the vicious circle of grief, misery, and falsehood. If one has a bit of Truthfulness in one’s Chitta, he can attain eternal pleasure. It is in better terms described as “Satta-Chitta-Ananda”. The realization of consciousness is to attain this form of Satta Chitta Ananda. The satta implies for Truth, the Chitta for the purest mind while Ananda is the eternal pleasure.