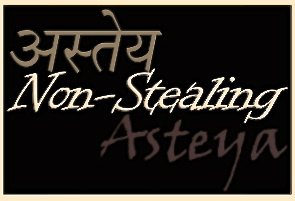 Asteya or Non-stealing implies not stealing anything, in any form from anyone. Asteya is also one of the important Yama in Patanjali Yog Sutra. The practice of Asteya not only limited to physical aspects rather it must be regulated on one’s thought or mental level.

It resembles that it also must be followed at the level of any kind of expression, writings, or thoughts.

What is meaning of Asteya in Ashtanga Yoga? Asteya, meaning as it defines that is ‘non-stealing. It also implies that anything that is not yours and it belongs to someone else must not try to steal it by any means. This yama signifies not only to steal other’s property but also not to deceive anyone. Usually, people’s general tendencies are the differentiation in their words and actions. They try to tell decorated and good words in front of the others. However, malice exists in their mind, which causes bad action or wrongdoings for others. This ultimately leads to deceiving the others, which also a kind of bad karma in the form of Asteya.

It is a beautiful Sanskrit word that literally meaning ‘non-stealing.’ This is a Sanskrit compound word consisting of a and steya. Steya is also a Sanskrit term denoting stealing. When ‘a’ combined with the term steya, it converts into its opposite meaning as ‘non-stealing’.

What is Asteya Yama?

The precept of Asteya Yama is prominently explained in Vedas, Upanishads, etc. In Puranas and other scriptures it is conceptualized that if one does any act of stealing, it is because of greed, anger, craving, and the illusion of Maya (the Mara).

The greed, anger, and craving are known as the ‘asamyak karma (evil deeds)’ and asamyak karma will bring bad effects with itself. The illusion of Maya used to make the human being relentless desperate for materialistic objects. It lures human beings to do any kind of unethical work. Human being loses his wisdom and resort to the most inferior act like stealing from others.

All religions of the world perceive Asteya as its core teaching. Under Jainism, it is one of the main vows along with Satya, Ahimsa, Aparigraha, and Brahmacharya. Jainism is one of the religions where the principle of non-stealing sustains paramount importance.

All Tirthankara including Lord Mahavira prominently stressed this important vow to follow in life. In Hinduism, the practice of it is a higher moral obligation. In Buddhism, this precept has to be practiced by the followers in a bit difficult way. In Christianity, under the eighth commandments of the Bible, any kind of stealing is strictly prohibited. Lord Buddha propounded craving as the fundamental cause of all kinds of suffering(the Dukhha). He also taught that the sufferings can be overcome by giving away all sorts of cravings. The cause of stealing is also some sort of craving or any unfulfilled desire.

The great sage Patanjali in his Yoga Sutras has affirmingly elaborated on the importance of the practice of Asteya Yoga. He wrote- ” अस्तेय प्रतिष्ठयम सर्वरा रत्नु प्रस्थानम “. It implies that when the precept of Asteya established, all the jewels or prosperity start to move towards that person.

The rise in the materialistic approach of life, the downfall of moral values in the social spectrum, and the short-cut methods to achieve anything –are some responsible factors towards the degradation of the precepts of Asteya. The precepts of it can also be practiced in ordinary life while living a family life. The concept of middle-path ( Majjhimāpaṭipadā) ensures the right balance between materialism and spiritualism.

The second important factor is the ‘law of effort(the Puruṣārtha)’. The law of effort or Puruṣārtha has four important limbs-Dharm(moral values), Arth (prosperity), Kama( psychological values), and Moksha(liberation or salvation).

These all four are substantially important for a human being to attain a complete life. Hence one should also earn money by efforts to feed or for sustaining the family. One must have to understand that true happiness will come from inside oneself rather than running blindly life afterlife towards the outside world.

To steal natural resources injudiciously is significantly against this principle. Natural resources like water, air, minerals, fauna, and flora are precious gifts bestowed upon us by ‘Mother Nature’.

However, we are continuously used to waste the water, food, energy, etc. without considering the fact that what we will be left for our next generations. Such an act is also against the very principle of Asteya.

Generally, the precept of Asteya prohibits the stealing of other’s physical objects. However, stealing the time of others, being jealous of other’s homes, cars, clothes, prosperity is also against the principle of Asteya.

The stealing of other’s hard work is also contrary to this very principle. If you take work from others and don’t pay for their hard work it is also against the principle of it.