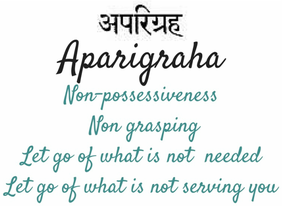 Aparigraha is a Sanskrit term that consists of two words- ‘A’ means ‘Not’, and ‘Parigraha’ means hoarding or accumulation. Hence, the term Aparigraha signifies none-hoarding,none-possessiveness of the materialistic, or worldly wealth. This great Yama also implies not to accept or accumulate surplus material objects inappropriately.

Here the practical contradiction arises. Under the ‘law of effort’ (the Purushartha), Artha (wealth or prosperity) is an important limb where one has to earn or accumulate it to sustain the family as one does not have to beg or borrow from the others. It is the secret key-sutra here that it becomes inappropriate when the wealth is accumulated only for hoarding, showing off, and fulfilling self-ego. Hence, one must have to be aware while practicing the precept of Aparigraha.

Yoga is the ultimate union of the self with the Ultimate Truth. This union necessitates the purity of the self. The unnecessarily accumulation or hoarding of worldly things will result in nothing in the end.

Bhagavad Gita also firmly preach that excess or surplus accumulation must be renounced, which is a significant obstacle in the path of a yogi. By practicing the dependency upon senses and physical body minimizes, the yogi becomes able to dive deeply to know ” who am I.” To know oneself paves the great way to know the ‘Ultimate Truth’.

The concept of Aparigraha finds its place as core teaching in all religions of the world. It is believed that the Jain Tirthankars ( spiritual teacher ) primarily gave importance to this concept.

In Jainism, not only ascetics but family followers also have to follow the path of this great Yama. Jainism firmly believes that too much or surplus accumulation closely associated with impurities like greed, jealousy, self-interest, and craving.

How to practice Aparigraha

The precept of Aparigraha is not only restricted to ascetics and yogis, human beings must have to practice it in their possible capacity. One must have to be self-contained or satisfied with whatever one has bestowed with. It doesn’t mean that you leave your efforts or ‘the Purushartha’ to attain the highest possibility of your life. But you must have to stop for a while and introspect what is the highest possibility of your life. Is it money? Is it wealth? Is it worldly objects?

Second, we must have to stop comparing ourselves to others. Stop comparing to other’s cars, homes, wealth, etc. It is complete madness. It is a race that has no ends. It will take away everything charming or eternal from you and will return nothing at the end. It will take away your youth, your charm, your happiness, your present moment of life, and your precious health. In spirituality, it is the ‘illusion of Maya’. But the irony is that very few of us dare to break this illusion of Maya. Once you break this illusion, a miracle starts to happen. Every human being is unique in this world. However, you are unable to know this uniqueness and spoiling it while comparing it to another one.

Lord Buddha got enlightenment on the night of Vaishakha Purnima( full moon). Before experiencing the Ultimate Truth, he became able to observe the numerous births and deaths of his previous life. He became able to see that before this birth he had so many births. In each life he had to take birth, spent childhood, became a youth, got married, had children, had to earn Artha (money or wealth) to sustain family–and the whole life gone spent pursuing craving and desire.

At the last, He had to suffer illness and agedness and got died. That was not the story of a single life rather a life afterlife he had to suffer in the same process. In the third phase of that night of Vaishakh Purnima, He experienced the ‘Ultimate Truth’ and became enlightened. After enlightenment, He vowed not to repeat the same process of suffering in this very life. Lord Buddha attained Nirvana(the salvation) in this very life while living in this world.

The whole world is racing blindly to accumulate surplus resources. This blind race has put humanity in restless sufferings. The human being has no time to stop and introspect what brings real happiness for him. Aparigraha entails that we should accept or accumulate whatever is essential for us. By practicing the precept of Aparigraha one can refrain oneself from greed and ‘bad karmas'(evil deeds). Aparigraha can overcome endless craving and desire and can loosen the severe attachments towards worldly objects. The precept of Aparigraha essential to bring balance between materialism and spiritualism.

HOW TO PREPARE FOR UPSC