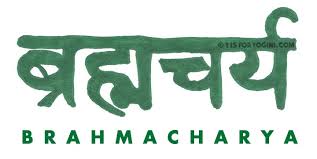 The Brahmacharya or Brahmacarya (ब्रह्मचर्य) is made of from Sanskrit term ‘Brahma’ and ‘Charya’. The ‘Brahma’ here implies the ‘Supreme Truth’ while the ‘Charya’ implies to act accordingly.

Thus Brahmacharya literally implies one’s action must be as the actions of the Brahma or the Almighty does. It is firmly believed that in the precept of Brahmacharya the absolute bliss comes from inside rather than from the outside world.

Generally, the term ‘Brahmacharya‘ and ‘Celibacy’ are considered in a similar context. However, Both are different in their meaning and scope. The meaning of Celibacy is very limited and implies only not to be indulged in any sexual activity.

On the other hand, the term Brahmacharya contains a wider perspective. It consists of human character and his behavior which must be consistent with the Ultimate Truth ( the God).

In this context, one key concept is necessary to be emphasized. Usually, we assume that the practice of Brahmacharya at the physical level is an important one. However, the practice of Brahmacharya at the mental level or the intention of the practitioner is the most important one. If someone practicing Brahmcharya at the physical level but continuously languishing in sexual pleasure at the mental level or in thoughts -it implies that the precept of Brahmacharya is not following in real. Hence it shall not bring the desired result as well. The majority of the practitioners do such mistakes while practicing and find unable to get the ‘Bliss’ of this principle. ‘The intention of Karma‘ is very crucial while bringing the results in our life. Once there was a dacoit (armed robber) who killed a commuter with a knife to snitch the money the innocent man was carrying with him. On the other hand, there was a doctor who was trying to operate on a person to heal him from a stomach tumor.

While operating with a knife by the doctor, the patient could not survive and got died in the operation theater. Here, in both the incidents, the physical act was alike as the ‘use of knife’, however, the karmic effect in the case of dacoit and the doctor’s life will be different because of the intention of the karmas. That’s why the intention of the karma while practicing Brahmacharya is also a very important one. Brahmcharya is not a goal in itself rather it is a way of life. The precept of this great Yama usually consists of components of all the limbs of Yamas of Patanjali Yoga Sutras. One should live a truthful life, should follow Ahimsa or Non-violence, should not steal or follow Asteya, should avoid sexual misconduct etc.-these are some basic characteristics of Brahmacharya. While practicing this great Yama some specific characters are also visible like simplicity, cleanliness, the practice of meditation, mindfulness, intake of satvik(pure)food, etc.

In Hinduism, the principle of Brahmcharhya finds its place in two fundamental forms. In the concept of the Vedic Ashram System, human life has been divided among four major phases-Brahmacharya (student), Grihastha (householder), Vanaprastha (retired), and Sanyasa (renunciate). In the first phase of life, the disciples had to live the life of an ascetic practicing Brahmcharya. He had to live in Gurukul (teacher’s home) tradition to get a life education. This phase of life was like the foundation of a complete human being.

In the second concept, this is one of the important Yamas in Patanjali Yoga Sutras. In this great Yama, the unmarried one has to exclude oneself from sexual activities while the married one has not to deceive one’s male or female life partner. Buddhism and Jainism also firmly propound the principle of Brahmacharya. The principle finds its zenith in almost all religions of the world. The core teaching of all religions strengthens this principle. However, in course of time, some sects deformed it and tried to teach the absolute opposite of the principle of supreme action.

The Yogis and Ascetics used to practice Brahmacharya in strict and severe form as part of their spiritual life. However, it is expected for a human being in family life to follow in their possible capacity. In the older times, there was the establishment of moral and ethical values and fewer options were available for deviation from it. In the present modern lifestyle moral or ethical segment of the society has been degraded and numerous options are available for deviation from this very principle.

Not following this great path at a tender age, usually reflects a lack of concentration in study or learning and other related difficulties. Health-related problems, degradation of life-values, lack of ethical value, and Purushartha( the law of effort) — some are common results that arise due to it. If the foundation of life is weak, life itself doesn’t blossom in its highest capacity and one becomes unable to experience the latter phases of life in a better way.

The most important part of the precept of Brahmacharya is that there is no binding to be unmarried or to be ascetics while practicing it. Being in married life or in family life one can practice it at the highest level. It is the key that in Brahmacharya the source of ‘Bliss’ or ‘Eternal Pleasure’ comes from inside rather than from any male or female partner. King Janaka, Guru Nanak Dev, Saint Kabir, Saint Ramkrishna Paramhans, Saint Meera bai, Saint Lahiri Mahashaya, etc. are several great examples of married people who attained Nirvana living a family life.