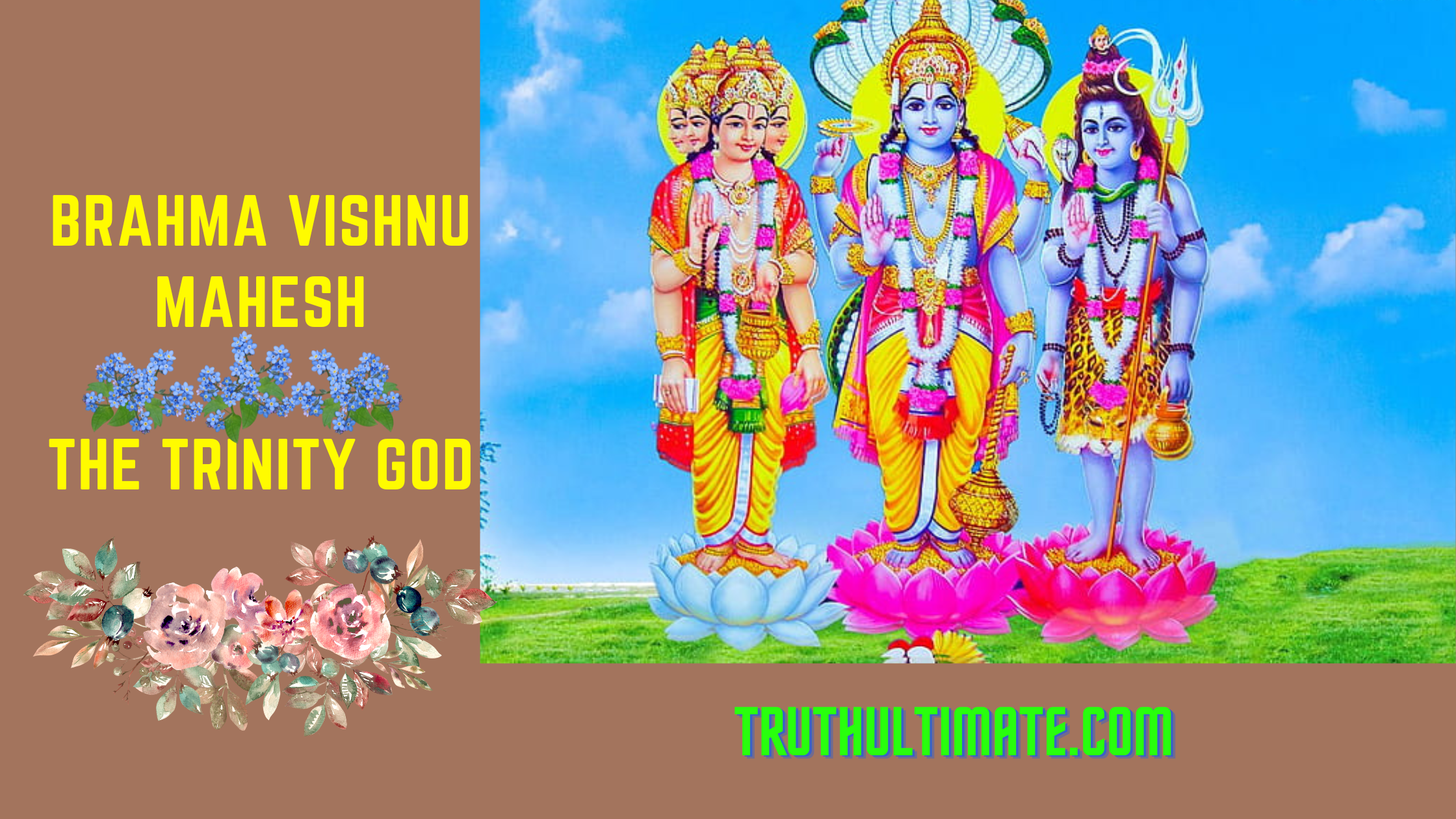 Brahma Vishnu Mahesh also popularly known as “the Trimurti” is the Hindu trinity God. In Hinduism, the Universal Truth or the Supreme Spirit is the Brahman.

Who is Brahma Vishnu Mahesh?

It is represented in three different forms, each corresponding to a cosmic function. While Brahma is the creator, Vishnu and Mahesh are the preservers and the destroyers respectively.

In Hinduism, there are many traditions and beliefs people believe in. Therefore, some scholars believe that the concept of Brahma Vishnu Mahesh is an attempt to restore the meaning of Brahman and to provide believers with a newer approach to the Divine.

The ultimate goal in yogic practice and philosophy is unity with Brahman. This unification is depicted as Trimurti.

Today, it is not common to see people worshipping Brahma Vishnu Mahesh as a Trimurti. Instead, believers in the Hindu religion worship one of the three as their supreme deity.

The other two deities are considered the incarnation of the supreme god. For example, Shaivism holds that Mahesh is supreme, while Vishnu is revered as supreme in Vaishnavism.

In comparison, Brahma has fewer devotees. The ancient texts depict the three gods as three elements of the planet – earth, water, and fire.

Each of these gods is assigned cosmic functions of creation, maintenance, and destruction.

Accordingly, there are many theories going around in Hinduism pertaining to the creation of Brahma Vishnu Mahesh.

Followers of Shaivism believe that Mahesh or Shiva is the supreme god. He assumes different names and roles. As Brahma, he creates. As Aghora or Rudra he dissolves, and as Vishnu, he preserves.

Therefore, according to Shaivism, Brahma, Vishnu, and Mahesh are not separate deities, instead, they are different forms of Shiva.

Though the concept of Trimurti or Brahma Vishnu Mahesh is not acknowledged by Vishnu Puran, the ancient text believes that Vishnu manifests as Mahesh for destruction purposes and as Brahma for creation.

According to Vaishnavites, Mahesh and Brahma are the forms of Vishnu. Vaishnavites believe in different avatars of Vishnu, like Krishna, Rama, Narasimha, etc.

There is another concept that holds Shakti or Adi Parashakti as the supreme divine form. This concept believes that Brahma Vishnu Mahesh was created by the goddess.

According to Srimad Devi Bhagwat Puran, Goddess is said to have addressed Trimurti as the absolute owner of the universe.

She further discloses the reason behind the creation of Brahma Vishnu and Mahesh. All the powers of God are within her and she has eternal limitless energy.

Adi Parashakti assigns Brahma the role of the generator of the universe with Goddess Saraswati being his consort.

Goddess Saraswati will assist Brahma while he creates the universe. Adi Parashakti then creates Vishnu and assigns him the role of the preserver of the universe.

He will be assisted by Goddess Lakshmi when he is performing the task of ruling and maintaining the universe.

She then creates Mahesh or Shiva and assigns him the role of destroying and regenerating the universe. He will be assisted by Mahakali, who will also be his consort.

There existed nothing in the universe in the beginning, according to the Puranas. The entire universe was covered with water.

It was also the time when Lord Maha Vishnu assumed his gigantic form and slept on water. While sleeping, a lotus flower emerged from his naval and from its cells, Brahma originated.

After his emergence, Brahma asked several questions regarding his existence. While he was in confusion, he heard a voice that suggested he meditate.

Following the suggestion received, Brahma meditated for twelve years. In the end, Lord Vishnu appeared before him.

Unable to recognize Lord Vishnu in his form, Brahma began arguing with the Lord. At this juncture, a lingam in its shiny form appeared before them.

In its physical form, it neither seemed to have a beginning nor an end. Out of curiosity to find who it was, Lord Vishnu suggests Brahma take the form of a Swan and reach the top of the lingam.

While Lord Vishnu assumed the form of a boar and dived into the water to enable it to reach the bottom of the lingam.

Four thousand years later, when both Lord Vishnu and Lord Brahma could not find the beginning or the end of the lingam and were confused, they heard the sound of “Om”.

Lord Shiva appeared before them and revealed that all three of them belong to the same entity and their role was established to ensure continuity in the universe.

Gayatri mantras are one of the most powerful mantras that will bestow worshippers with success, protection, wealth, health, harmony, and intellect.

Gayatri mantra hymns can be recited separately for Brahma, Vishnu, and Mahesh.

This mantra is highly recommended for people who seek wisdom and knowledge. Worshipping Brahma will help devotees understand the real essence or truth behind many things in life.

Vishnu is the preserver of the universe. He is everything and inside everything. Though there are many avatars of the Lord, the 10 avatars or Dashavatars occupy a special place in the heart of devotees.

Reciting this mantra regularly helps ward off evil from our lives. Upon being impressed by your devotion, Shiva grants peace of mind and blesses you with health and wealth.

Who are the three main Hindu gods?

The three main Hindu gods are Brahma, Vishnu, and Mahesh. Brahma is the creator of the universe, while Vishnu and Mahesh (or Shiva) are the preserver and destroyer respectively.

What is the difference between Brahma Vishnu Mahesh?

The difference between Brahma, Vishnu, and Mahesh lies in the roles they play to ensure everything is in order in the universe.

The creator of the universe is Brahma. He is the one who possesses knowledge.

Vishnu is the protector and preserver of the universe. He is also known as Hari or Narayana. He is often seen with his consort Goddess Lakshmi. To perform various duties, Vishnu is believed to have taken ten incarnations and avatars.

Mahesh or Shiva is the destroyer of the universe. He is worshipped in different forms in different countries and is the father of Lord Kartikeya and Lord Ganesha.

Who is above Brahma Vishnu Mahesh?

The Supreme Brahman or Para Brahman is often described by Hindus as formless and as someone who is everywhere and in everything.

Para Brahman is referred to as Nirguna Brahman in the Advaita Vedanta tradition, meaning someone without any attributes. In Shaktism, Shaivism, and Vaishnavism, Para Brahman are Adi Shakti, Shiva, and Vishnu respectively.