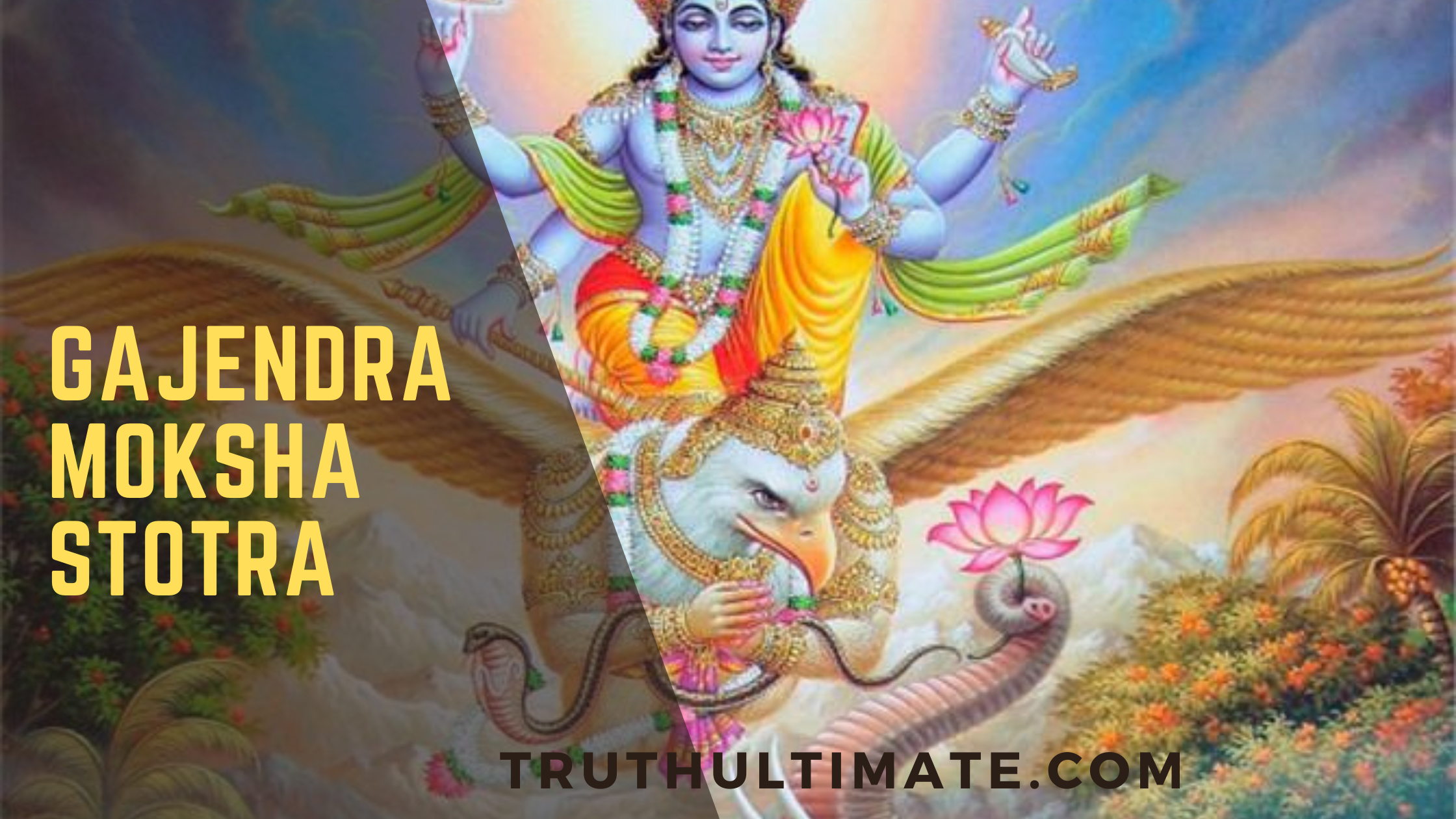 Gajendra Moksha Stotra is a prayer or a mantra in Hinduism that is addressed to Lord Vishnu. It is also known as ‘The Liberation of Gajendra’.

But, many of us don’t know what stories lie behind this mantra. Gajendra Moksha Stotra is a legend from the 8th Skanda of Bhagavat Mahapuran where Lord Vishnu came down to earth to protect Gajendra.

Gajendra was an elephant stuck in a muddy lake, from the clutches of a crocodile Makara. With the help of Lord Vishnu, Gajendra achieved moksha (liberation from the cycle of birth and death).

Hence, it has great significance in Hinduism, and to an extent, it is believed that Gajendra Moksha is one of the most powerful mantras in the world.

Moreover, chanting this mantra will help get out of unwanted situations. The best preferred time to recite Gajendra Moksha is in the early mornings or deep sleep also known as the dream state.

The meaning behind Gajendra Moksha Stotra:

The word Gajendra Moksha Stotra has symbolic meanings behind it, and we don’t take it in the literal sense.

Symbolically, Gajendra refers to man, the crocodile is the sins of the man, and the muddy lake of water is Saṃsāra.

The symbolic meaning states that the sins of a person create an endless chain of karma in this world which is similar to a crocodile preying on an elephant who was stuck in a muddy lake.

It shows that humans are stuck in a continuous loop of death and rebirth and only with faithful devotion they will break free from the cycle of rebirth and death.

Furthermore, they will be stuck in the cycle until the day they look beyond everything and submit themselves to Lord Vishnu, the Supreme Being.

Now that we have looked after the meaning of the mantra, let’s look deeper into the story.

In a forest in mount Trikoota, there was a garden that belonged to the ocean of gods, Lord Varuna.

The garden consisted of many beautiful lakes, rivers, plants, and celestial trees. The legend says that the water in these lakes was always sweet and fresh, the trees were full of flowers and juicy fruits.

In the forest there lived an elephant, Gajendra who was the king of the garden. Once on a hot sunny day, Gajendra and his family decided to go to one of the lakes in the garden.

Since Gajendra could not bear the heat he dipped his feet into the lake, he quenched his thirst by drinking the water and passed some water to his family as well.

While he was passing the water, his feet were attacked by a crocodile, the crocodile caught his feet and started dragging him into the lake.

Gajendra tried very hard to release himself from the clutches of the elephant, the other elephants did not know how to help Gajendra.

So they started screaming and shrieking for help while trying to pull Gajendra out of the lake.

Gajendra was tired so he asked for Lord’s help and prayed to him. Upon hearing Gajendra’s call for help, Lord Vishnu came to help Gajendra.

He split open the crocodile’s mouth and killed it, saving Gajendra’s life. The crocodile ‘HuHu’ was a Gandharva king in his previous life.

Once the sage Devala came to visit HuHu, and while they were bathing and the sage was offering prayer to Surya the sun god, HuHu pulled Devala’s leg for fun.

The sage Devala got angry, and he cursed King HuHu to become a crocodile in his next life. Even though the king begs for sage Devala’s forgiveness.

Devala explained to the King that he cannot undo the curse and hence he told the king that Lord Vishnu will help King HuHu by killing him.

Along with getting rid of the curse as well as breaking him free from the cycle of rebirth and death.

While Gajendra in his previous life was Indradyumna, a great king who was very devoted to Lord Vishnu.

Once sage Agastya came to visit him but Indradyuman did not get up to greet him, this act of egoism did not please the sage.

He revealed to the king that in the next life the king will be an elephant and he will learn his lessons the hard way how to completely surrender oneself to the Lord.

Hence you should chant this mantra for getting all the blessings that may help you face the difficulties of life.

You can make chanting Gajendra Moksha a regular part of your life as it is very beneficial for you.

We all are stuck in some sort of problem, and for that matter, many of us look forward to dealing with it religiously.

And, mantras are a great source of bringing peace, calmness, and serenity to your life.

Moreover, this specific mantra can help you prosper in life and help you get rid of problems that have stricken you in this life.

As it provides Lord Vishnu’s blessings and will ultimately strengthen your faith by reminding you that Lord Vishnu is protecting you.

The Lord is always there to help you overcome the difficulties in your life, just like he did with Gajendra, the elephant.