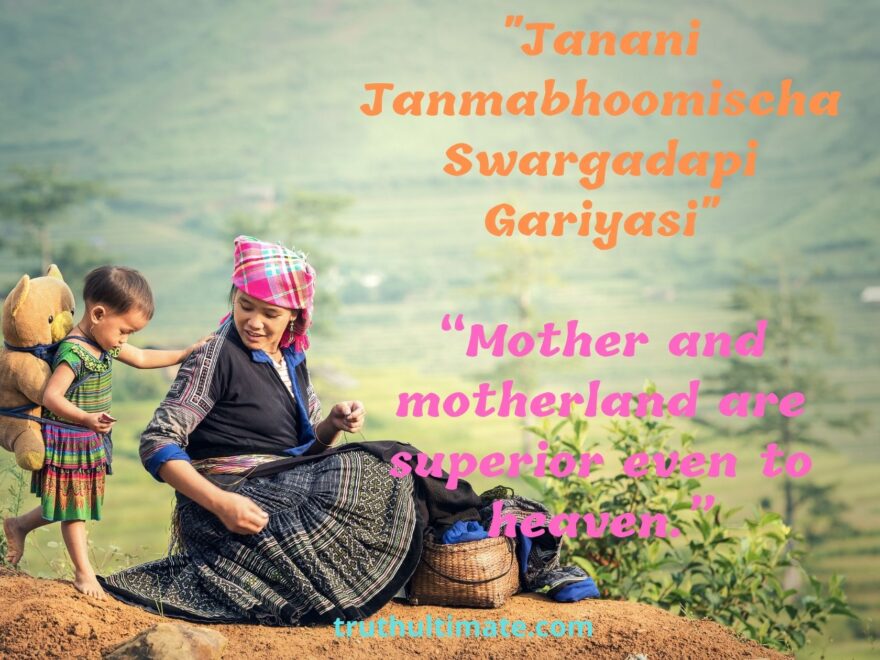 Janani Janmabhoomischa Swargadapi Gariyasi is originally a hemistich of a great Sanskrit shloka. This phrase holds a momentous moral and patriotic importance to it. Like other Sanskrit shlokas, this shloka covers a whole different aspect of life. Patriotism is not only the love for your homeland but is the salutation of your culture, traditions, religion, beliefs, and values.

If you are a true patriot, you love each and every bit of your country. Not only do you love it, but you feel proud to make it your identity. The motto i.e., Janani Janmabhoomischa Swargadapi Gariyasi, portrays the multi aspects of religion, literature, intellect, and nationalism. This Sanskrit motto is the picture-perfect analogy of people and their culture.

Patriotism is not a worldly thing. But it is also the greatest asset of all time. Therefore, the representation of your heritage, history, culture, and civilization holds significant importance.

This Sanskrit shloka truly depicts the faithful implication of the love for your homeland. This shloka is a prominent illustration of how even God considers patriotism a virtue.

Although, this shloka is a line from the complete Sanskrit verse. The meaning of this phrase alone signifies the true essence of the whole verse. The verse is part of the great tales of Mahabharata and Ramayana.

“Mother and motherland are superior even to heaven.”

This phrase has two highlighting elements in it. One is “mother,” and the other is “motherland”. We all know how mothers hold substantial importance in our lives. They are the comfort of our homes, and it wouldn’t be unfair to say that mothers are basically the homes. They protect us, care for us, nurture us, and love us. Their love is beyond any measure. That is exactly why God has given them the rank superior even to the heavens above.

The same goes for our motherlands. Our homeland is also similarly important in our lives. The importance of one’s homeland is quite clear by this shloka. The shloka puts mother and motherland side by side to each other. This tells us about how just like our mothers, our homelands are also the homes to us. They shelter us, they give us an identity, and they nourish us with all its naturals.

Our homelands are like the holiest sites. All the elements, including its trees, stones, soil, stock, and even the non-living things, are all sacred for us. Therefore, our homelands deserve a sacred place in our hearts, just like our mothers.

The last highlighting element of this shloka is the comparison of homelands to the heavens. There is no doubt in the fact that our homelands are the pieces of heaven on earth. In fact, they are far greater than the heavens. All the pretty things that the heavens have seem very small as compared to the things we have in our homelands. Our homelands provide us with the most divine and the most seamless treasures. It not only sustains us physically, but it holds our hearts connected together with love and respect.

This is exactly why even Lord states that homelands are superior to all the heavens. So if we are truly loyal to our motherlands, we have already accomplished heaven.

The pronunciation of Sanskrit shlokas is quite complex but pretty amusing. It is necessary to pronounce a phrase correctly to extract the true essence out of it. The Sanskrit language has always been the language of poets and intellects. Thus, it needs all its splendors and grandeurs for its proper diction.

The pronunciation of “Janani Janmabhoomischa Swargadapi Gariyasi” according to the International Alphabet of Sanskrit Transliteration, goes as

This pronunciation is originally based on the Sanskrit dialect. The shloka is indeed a lengthy and complex phrase to pronounce. Yet still, its exquisiteness lies in its intricacy.

This phrase belongs to many shlokas of ancient Sanskrit literature. The Sanskrit scriptures are one of the beautiful scriptures in the world. It is a vast literature that includes all the topics, including religion, philosophy, poetry, medicine, economics, etc. Most of the Sanskrit scripture is present in the form of “The Vedas” and “The Bhagavad Gita, i.e., the tales of Mahabharata and Ramayana.”

These two epics Mahabharata and Ramayana, are among the oldest Sanskrit writings. They are full of such Sanskrit slokas that embody all the aspects of our lives. The “Janani Janmabhoomischa Swargadapi Gariyasi” sloka is also one of such powerful slokas. The Sanskrit verdict of this sloka is a part of a complete Sanskrit verse mentioned in Ramayana.

The Sanskrit transcription of this part of the verse (Janani Janmabhoomischa Swargadapi Gariyasi), goes as

“Mother and motherland are superior even to heaven.”

This phrase orates the importance of patriotism. The love for one’s country is a priceless emotion. It has no boundaries and no exceptions. This love is pure and selfless. This is what the sloka preaches. They are the Lord’s words that make us realize how even the most beautiful thing like heaven is less than the love for our homelands.

This phrase is part of complete Sanskrit verses. These verses belong to the great epics of Ramayana and the Mahabharata. The Ramayana and Mahabharata are the ancient and the first Sanskrit scriptures. These two classics are full of life lessons and God’s commands.

The Ramayana teaches about the duties of a person as a friend, as a brother, as a son, and as a citizen. These duties hold major importance in our lives. If we are good humans, then we must follow the principles of such duties to succeed in this life and the life hereafter.

The importance of these duties is particularly explained in different verses of the Ramayana. This sloka is part of such verses that highlights the value of devotion, dedication, and love for the homeland.

There are two existing versions of this sloka. Both of these versions are Sanskrit in origin. They belong to these two verses of the Ramayana and Mahabharata. The first verdict belongs to Rishi Bharadwaja and Lord Rama. In this verdict, Rishi addresses Lord Rama the following Sanskrit sloka,

“Friends, riches, and grains are

highly honored in this world.

(But) mother and motherland

are superior even to heaven.”

The second verdict is between Lord Rama and his brother Lakshmana. Lord Rama addresses Laskhmana by saying this shloka as,

“Lakshmana! even this golden Lanka

does not appeal to me.

Mother and motherlands are

superior even to heaven.”

Both of these verses signify one thing, and that is “patriotism”. They are the true examples of how great our motherlands are. How they are greater than any other riches of this world. Love for your country is superior even to the biggest and most beautiful entity i.e., the highest heavens.

Janani Janmabhoomischa Swargadapi Gariyasi is a Sanskrit sloka that highlights the passions of patriotism. Because of its beautiful pronunciation, perfect wordings, and amazing composition, this sloka became part of many songs.

The most hit and famous Janani Janmabhoomischa Swargadapi Gariyasi song was made in 1982. It was a part of the Indian-Telugu patriotic action film- Bobbili Puli. This film was a hit in Indian cinema, casting the superstars N.T Rama Rao and Sridevi.

The music of this film was also a blockbuster of its time. The music director was J.V Raghavulu. He wrote a song after this phrase i.e. Janani Janmabhoomischa. The lyrics of this song are evergreen. The lyrics are,

These are the lyrics of the Janani Janmabhoomischa swargadapi gariyasi song. It is a patriotic song that is quite melodious and moving.

Janani Janmabhoomischa Swargadapi Gariyasi is a Sanskrit sloka. It is part of the complete verse from the famous epics of Ramayana and Mahabharata. These two epics are the foremost Sanskrit scriptures. They are the major scripts of the Hindu religion. They speak for the goodwill of humans and teach them the lessons to lead the life in the simplest ways.

The complete verse of this sloka has two versions. But the highlighting part of both of these verses is the phrase- Janani Janmabhoomischa Swargadapi Gariyasi. This phrase is the key element that carries the total context of the whole verse.

The Sanskrit transcripts of this part of the verse go as,

“Mother and motherland are superior even to the highest heavens.”

In this phrase, the Lord tells us about the significance of our homelands. It teaches about the duties of a good and loyal citizen. We all certainly have hints of love for our homelands. But are we really a true devotee?

If only we understand how comfortable our lives are with the shelter and the identity we get in the form of our motherlands, we’ll be at a much better place now. Our homelands are the representation of our heritage, our people, our civilization, and our culture. They are the proves of our existence in this whole wide world.

It doesn’t matter wherever you go; you’ll always have that sense of craving inside you. This craving and sense of emptiness are what make us realize how valuable our motherlands actually are.

This phrase is also proof of how much worthy our homelands are. How much patriotism makes a person complete. This phrase is an illustration of God’s implications on nationalism, love, and devotion.

“Superior to the highest heavens” this line is very powerful and very amusing. It is a sign for the ones who want to realize and appreciate. If God’s most amazing creation i.e, heaven, is compared to something, then this thing is already significant. And this thing is none other than our homelands. They are the most underappreciated yet still the most worthy. Only if we realize their worth!

What is the meaning of Gariyasi in Sanskrit?

The word “Gariyasi” is part of the slok- Janani Janmabhoomischa Swargadapi Gariyasi. This sloka belongs to the Sanskrit verses of Lord Rama. He uttered these verses to Lakshmana, and it is historically mentioned in the Ramayana. The whole sloka is in Sanskrit and its transcript go as,

“Mother and motherland are superior even to the highest heavens.”

Here, the word “Gariyasi” is also in the Sanskrit language. According to the Sanskrit dictionary, “Gariyasi (गरियासी) means better/ most dear.”

This translates in this verse as mother and motherlands “being superior i.e Gariyas” to the heavens above.

The phrase Janani Janmabhoomischa Swargadapi Gariyasi is part of the epic Ramayana. According to this context, the writer of Ramayana is also the writer of this phrase. The Ramayana was primarily composed by the writer and poet- Adi Kavi Valmiki. Thus, this phrase is also penned down by Valmiki.

Valmiki- the harbinger poet of the Sanskrit language. His most prominent attribute is the Ramayana. His honors are “Adi Kavi” and “Maharishi”. Another notable attribute of Valmiki is his dharmic movement which is now known as “Valmikism”. Valmikism was the movement of religious and social beliefs based on the teachings of Valmiki.

Despite being the author of the first epic, i.e., the Ramayana, Valmiki was a pious and spiritual personality of ancient times. His teachings are full of life lessons that turn our lives around in the most perfect ways.