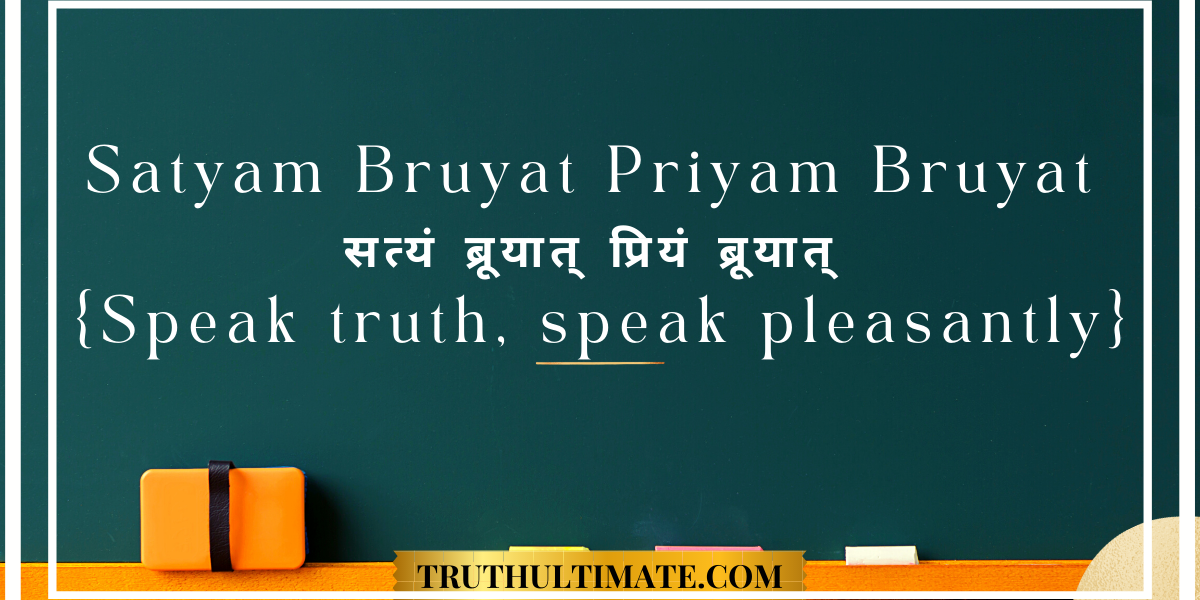 It preaches how Truth if spoken correctly, is always soft and soothing. While fabrication and lies are spoken anyhow always end in tough unsettling ways.

Satyam Bruyat Priyam Bruyat is one of the many wise and great shlokas stated in Manu Smriti. It is a Sanskrit verdict of Hinduism that constructs many Hindu constitutions and laws.

It guides and preaches many virtues, ethics, rights, and moral values. The beauty of Manusmriti lies in the fact that it is not limited to Hindus only.

Many countries like Thailand, Cambodia, Indonesia, and Myanmar have opted for Manusmriti’s teachings in the Buddhistic laws.

This phrase belongs to the whole Manusmiriti shlokas. This shloka is about the importance of Truth and untruth and how they matter the most in the times of Kali Yuga. The Manusmiriti (4.138) says,

It is roughly translated as:-

Do not speak the Truth in an unpleasant manner

Even if pleasant, do not speak untruth,

This is the path of eternal righteousness.

The meaning of this whole shloka, especially the part- Satyam Bruyat Priyam Bruyat focuses on the significance of speaking Truth. Truth is indeed the greatest virtue of all times. It is the path to self-satisfaction and divine love. Truth is the most admirable deed that receives its blessings in this life and the life hereafter.

The phrase- Satyam Bruyat Priyam Bruyat tells about how Truth should always be pleasant and soft.

We have heard about bitter realities and harsh truths. But if we look into it, there is nothing unpleasant about the Truth. Truth always brings peace and prosperity in the long run.

This phrase emphasizes speaking the Truth pleasantly. And by pleasantly, it means that if spoken correctly, Truth touches the heart of everyone.

But a harsh and rude approach will end in nothing but pain and discomfort to others. So, although speaking the Truth, one should remain aware of his attitude and tone.

Your sincere and pleasing attitude marks a golden stamp on the hearts of others. But your bitter and punitive ways can even turn Truth into immorality.

This is the actual message behind the meanings of this phrase and shloka i.e., the Truth spoken pleasingly.

This phrase (Satyam Bruyat Priyam Bruyat) is part of a whole Sanskrit shloka. This Sanskrit shloka belongs to the evergreen cosmic literature of Hinduism- the Manusmiriti.

Like other Sanskrit shlokas of Manusmiriti, this shloka also holds great importance. It instills how to keep yourself on the right path in this era of Kali Yuga.

The Sanskrit verdict of this shloka goes as,

The Roman English verdict of this Sanskrit shloka read as,

The English translation of this shloka is approximately done as,

The starting parts of this shloka imply the significance of Truth and how one should speak it in the best possible manner.

At the same time, the later pieces of this shloka defy speaking untruth no matter how pleasant it sounds. We all encounter the Truth and Lie situations in our everyday lives.

And we are all aware of how Lies always sound pleasing while Truth comes out bitter.

To keep yourself truthful even in times of hardships. To avoid speaking the pleasant and sweet lies no matter what worldly entities it gives you.

One must understand strife for betterness and prioritize Truth over untruth even in the time of do-or-die situations. All of this is the actual struggle against the sinfulness that lies within us.

This is all that requires strength but, in the long run, provides you with everlasting grandeur.

Satyam Bruyat Priyam Bruyat is a verse of an entire Sanskrit shloka. This shloka belongs to the Manusmiriti manuscripts. The entire shloka is Sanskrit in origin and it goes as,

The translation of this shloka describes the virtue of Truth and forbids falsehood. Truth is something that establishes a sense of satisfaction and naturalness.

Hence, you need to tell the Truth with all its pleasing and soothing attributes. This is what “Satyam Bruyat Priyam Bruyat” orates.

The remaining part of the shloka describes the importance of being truthful to oneself and others even when it becomes difficult to hold onto the rope of veracity.

If one manages to keep the promise of truthfulness to oneself, he lives with pride and honesty in this life, and it is believed to get rewarded with eternal concords and credits in the life hereafter.

Satyam Bruyat Priyam Bruyat is a phrase taken from an entire Sanskrit shloka. This shloka is part of the ancient Hindu literature that dates back to the 2nd and 3rd centuries.

This comprehensive literature is a moral guide to all humans that helps them achieve eternal glories. And it is none other than the famous Manusmiriti.

The actual source of Satyam Bruyat Priyam Bruyat- the starting part of the whole Sanskrit shloka belongs to the Manusmiriti Verse 4.138. The whole verse says,

Here the verse highlights two sorts of Truth. One being “agreeable truth” and the other being “disagreeable truth”. There is quite a difference between both of these.

These are all categorized as “agreeable truths” whereas, if truth brings harm to a good person or if it violates the respect and privacy of someone.

Then, this Truth is disagreeable, and it is better left unsaid. This is the kind of truthfulness and honesty one should aspire.

Moreover, the verse says about the “agreeable untruth”. It is something that is wickedly false, but it is pleasant to the evil.

Under such conditions, if you also side with the evil and chooses the path of untruth, you get nothing but disgrace.

ISKCON- the International Society for Krishna Consciousness, also known as the Hare Krishnas, is a religious organization.

A.C Bhaktivedanta Swami Prabhupada founded ISKCON in 1966. The sole objective of ISKCON is to spread the message of Hinduism and to practice Bhakti Yoga and Karma Yoga.

Bhakti Yoga is a way of pleasing the supreme Hindu Lord- the Krishna. It has now befitted as the most influential religious organization of Hinduism.

The core beliefs of ISKCON focus on the verses and teachings of Bhagavad Gita and other Hindu works of literature. ISKCON has numerous centers worldwide.

Its headquarters are in India, Sri Lanka, etc, while above 150 ISKCON centers are present worldwide. The followers and organization members of ISKCON follow dharmic regulative principles.

They indulge in various festivities related to religion and preach to others the message of God.

The Sanskrit verses from Manusmiriti and Bhagavad Gita are also the topics of discussion at ISKCON. Among these many other verses, the point of view of ISKCON on verse 4.138 of Manusmiriti is also worth mentioning.

Srila Rupa Goswami preaches to the Bhakti yoga followers the art of controlling one’s speech. And to teach this art the teachings from Bhagavad Gita and Manusmiriti constitute the basic framework.

In Bhagavad Gita, Lord Krishna says about the sombreness of speech. He preaches the followers to use words that are satyam (truthful), priyam (pleasant), and hitam(beneficial).

The severity of the good speech, according to Manusmiriti, lies in its pleasant Truth. The Manusmiriti verse 4.138 states,

By following the path prescribed by the Lord i.e., the path of truthfulness and honesty, you can maintain a balance between good and subtle speech.

All of this matters a lot because your unnecessary comments can do similar damage as your silence will do in times of oppression.

These two phrases constitute the starting parts of the Manusmiriti verse 4.138. “Na Bruyat Satyam Apriyat”- is the continuation of the phrase Satyam Bruyat Priyam Bruyat. It translates as “Do not unpleasantly speak the truth”.

This is the difference between what we consider virtue and what the Lord considers a virtue. Speaking Truth is not that hard but speaking the right amount of Truth is very hard.

If you know a truth that, if hidden, brings no harm to anyone, then speaking such a truth is not necessary. It will only cause unpleasant effects on the privacy and esteem of a person involved.

The Hindu religion is full of such verses that teach about the morals, ethics, values, and decency of living a life. All these verses are mostly part of Bhagavad Gita or Manusmiriti.

These two books are the soul of Hinduism. They are comprehensive and divine. They tell about how to live a peaceful and committed life here in this world. And how to achieve God’s love and will by following the path of Dharma or Dhamma.

Among the many eye-opening and evergreen verses, verse 4.138 of Manusmiriti is also a comprehensive guide to seamless life.

The phrase Satyam Bruyat Priyam Bruyat holds a great deal of importance. It emphasizes the significance of Truth and how it holds an important place in our everyday speech. The whole verse is basically as important as this phrase alone is.

It demonstrates a concept of agreeable Truth and agreeable untruth. While it reflects how Truth does not always bring you to the path of divine love.

But the Truth that is pleasant and that does not hurt others brings you closer to eternal fortune and righteousness.