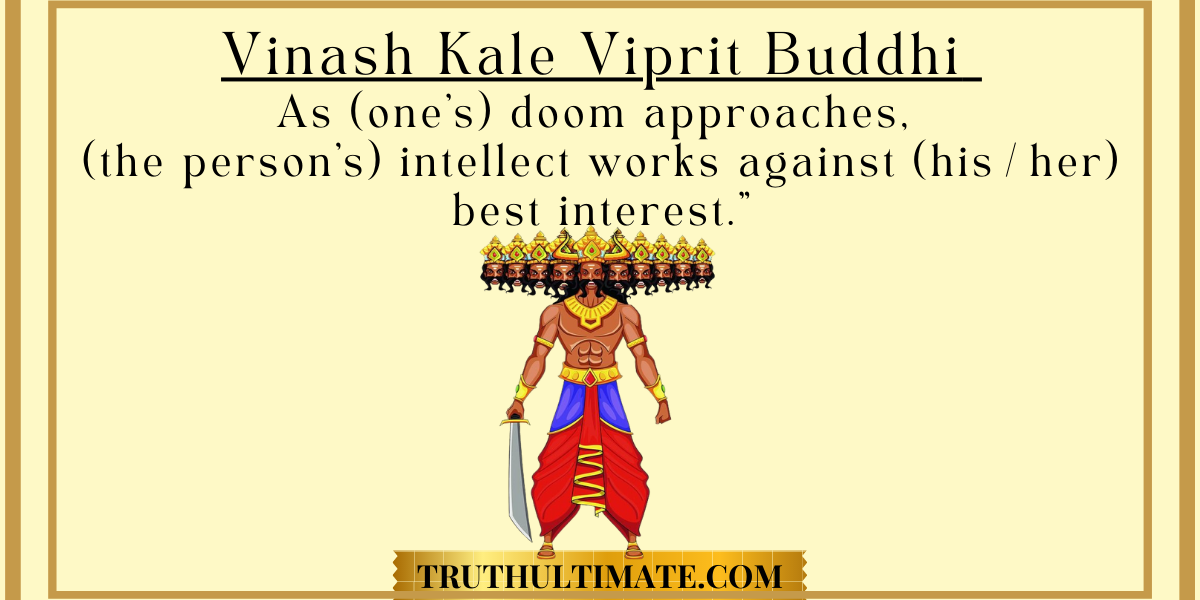 Vinash Kale Viprit Buddhi is a great Sanskrit verse that holds significant philosophical and intellectual value. It is one of the oldest teachings, which is part of the usual everyday speech in Hindu culture and tradition.

We have innumerable phrases and sayings that we use in our everyday life. However, some of these old verses are so well time tested that we couldn’t help but wonder about the accuracy of its philosophy. “Vinash Kale Viprit Buddhi” is one of these oldest teachings. When we look into its meaning, we find that the choice of words and the veiled message behind these words are remarkably outstanding.

The way it fits as per the circumstances of an individual is precisely striking. It is the kind of phrase that gives a picture-perfect analysis of a situation and of that person particularly. These kinds of phrases are better used when we understand the meanings and philosophies behind them. Vinash Kale Viprit Buddhi also requires a detailed understanding to extract the true essence out of it.

It is a Sanskrit proverb and shloka that is correctly pronounced as “Vinash Kale Viprit Buddhi”. These words are Sanskrit in origin, and their pronunciation is the core of its grandeur. So, when you use this phrase, it is better to know about its correct articulation.

Anyways, the meaning of this shloka is quite obvious from its wordings. If you have learned Sanskrit or Hindi, then these words are not new to you. But still, many of us don’t understand the proper connotation and enunciation of them.

The phrase is contextually translated as,

The translation of this Sanskrit shloka has two aspects in it. First, “as the doom approaches,” means when God decides to destroy someone or when the time of destruction follows. Second, “the intellect works against the best interest” means that a person’s ability to differentiate between good and bad becomes lost.

When we combine these two aspects of this shloka we’ll see that when God wills to punish, he makes the mind of a person numb towards all sorts of intellects. This phrase is a demonstration of a person’s wrong decisions.

It shows that when a person makes a wrong move without considering the cons of that move, then doom falls upon him. And when destruction comes, his mind becomes incapable of accepting any good advice. He then becomes a person with blank intellect whose mind keeps pushing him towards the worst of interests.

This phrase describes how when a person makes an unfavorable decision or sticks to something wrong, then there is no hope. His mind will then only show him the path of destruction, and he follows this path like a blinded fool.

This is not God’s will to put someone through destruction. But it is the ego of a person that puts him through it. It is his self-absorbed uncanny nature that makes him numb towards all kinds of good thoughts. This is when God decides to leave a person on his own by letting him go towards self-destruction.

Vinash Kale Viprit Buddhi- a Sanskrit shloka that is more correctly pronounced as “Vin-a-sh Ka-le Vip-rit Bu-ddhi”. Vinash Kale Viprit Buddhi is also one of the insightful shlokas of Chanakya. Chanakya was a great author, teacher, philosopher, and economist of his time. He belongs to ancient India and also served as a jurist and royal advisor. His prominent works are with emperor Chandragupta. He helped him establish the Maurya Empire and abetted him in his rise to power.

Chanakya was a born leader. He was very much different from others because of his intellectual capabilities. His simple and decent approach towards life, his powerful insights, and his philosophical knowledge are valuable assets in Hinduism and many other religions. Not only religiously, but the shlokas of Chanakya are accommodating to everyday life.

This Shlok is from his world-famous book “Sampurna Chanakya Niti”. This book is the lifelong work of Chanakya on the Indian way of life. It is a thesis of his study on what are the ideal ways to live a life. It is a comprehensive book that reflects his ideologies, philosophies, and insights regarding life.

The Sanskrit verdict of this shloka goes as,

The Roman pronunciation of the Sanskrit verdict is,

The English and Hindi translation of this Sanskrit shlok is,

The story of Vinash Kale Viprit Buddhi comes from several great scriptures like the Ramayana, the Mahabharata, the Manusmriti, the Upanishads. This phrase first got introduced when Lord Rama went on a misadventure for a golden deer. This story is also stated in Chanakya Niti, and it reads as

Nobody created a deer with golden fur, nobody saw it before, and nobody heard about it. Nevertheless, it was the thirst of lord Ram (to hunt it upon goddess Sita’s solicitation) that led his intellect to work against his interest (and ultimately led to doom in the form of goddess Sita’s abduction by Ravana)

The story of Lord Rama’s misadventure is specifically stated in the Ramayana as a lesson for humanity. It says that when Lord Raam sets out in search of a golden deer, Devi Sita ends up getting kidnapped by Ravana. No one has ever seen a golden deer; no one has even heard of it.

Ravana got the curse of Tapaswini

According to mythology, Ravana embarked on a journey from his Pushpak plane. On the way, Ravana saw a very beautiful tapaswini who was engaged in spiritual practice and that tapaswini had chosen Lord Vishnu as her husband. Still, Ravana Dragging Tapaswini’s hairstyle forced her to walk with him.

Ravana got the curse of Nalkuber:

Once Ravana reached heaven to conquer heaven, and there he saw the Apsara named Rambha. Seeing the beauty of Rambha, Ravan forced her to go with him. Still, Rambha refused to go with Ravana, and Rambha said that I am the life partner of Nalukuber, son of your brother Kubera.

Therefore, I was your daughter-in-law. Still, Ravana forcefully misbehaved with Rambha. When Nalukuber knew the truth, he cursed Ravana that if he touches any woman without the woman’s approval, Ravana’s head will split into 100 pieces.

In this way, Ravana got many curses, in which the sister of Ravana’s wife also cursed Ravana. Still, despite all these curses, Ravana did not take any lessons, did not follow the path of truth, and only increased his misdeeds.

Lord Krishna’s maternal uncle Kansa was a cruel king who attacked sages, saints, poor and petty, and severely tortured them. Due to his atrocities, the residents of Mathura and other villages were suffering a lot of grief and sorrow, but no one had the courage to be able to go against Kansa.

When Kansa married her sister Devaki to Vasudev ji, there was an Akashvani through which Kansh and all the people came to know that Devaki’s eighth child would kill Kansa. However, Kansha killed every child of his sister Devaki. His terror increased even more than before, but destiny took such a turn that Lord Krishna, the incarnation of Lord Vishnu, was born as the eighth child of Devaki and Vasudeva, who Killed Kansa.

Dhritarashtra was so immersed in his ego that he did not worry about the Dharma; he just thought of himself and his 100 children, known as ‘Kauravas’. Later on, he and his sons committed countless sins.

At the end and all these Kauravas were killed by the Pandavas in the Mahabharata war. This also depicts the classic example of Vinash Kale Viprit Buddhi.

What are the best examples of Vinash Kale Viprit Buddhi?

Almost every day, we get to know about such people who appear as the best examples of this phrase. We have heard many events where we find people so dumb and ignorant that we couldn’t help but say “Vinash Kale Viprit Buddhi”.

One of the best examples of this phrase applies to our ignorant attitude towards ecological fluctuations. We, humans, are completely ignorant about the everyday change in our atmosphere. The disastrous changes due to global warming are becoming a threat not only to nature but also to the whole of humankind.

Every day we hear news regarding the melting glaciers, the increasing pollution, and the contamination of the marine biosphere. Yet still, we are failing every day to take any step towards the resolution of these issues. And certainly, our doom is getting near because of our constant ignorance and immoral decisions.

The thought here applies to the man-made developmental activities, which ignored all the signs of ecological and environmental damages. And the disastrous results are in front of our eyes. This happened due to the ignorant and numb attitude of people towards the warning signs of damages. This is the perfect example of Vinash Kale Viprit Buddhi i.e the destruction comes to those who think feeblemindedly and ignorantly.

What is the meaning of Viprit Buddhi?

This whole verse depicts that when doom or destruction follows a human being, his own intelligence or wisdom starts going against him. In such a crisis, he chooses the path of wrong decisions, which leads him to self-destruction.

HOW TO LIVE IN THE PRESENT MOMENT