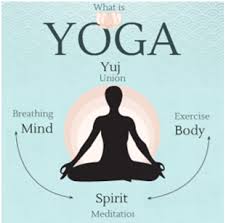 What is Yoga? Is it a form of exercise or religious ideology? The meaning of this word is “oneness” or “union”. It uses meditation and breathing techniques. Yoga is a popular way of exercise around the globe.

Yoga belongs to ancient Indian philosophy. There is no authentic inventor of it but Indian history is full of the number of saints who provoked it as a path to make union with God. Yoga Sutra is one of the oldest texts written about it and considered as a guidebook of this spiritual exercise. It traveled from east to west by many Indian sages who made it popular among them.

The simple philosophy of Yoga is that mind, spirit, and body are all one and inseparable. As the meaning of it is unification so practicing it will combine all three elements of the body at one point. Male and female practitioners are known as Yogis and Yoginis respectively.

Yoga is one of the six orthodox of Hindu philosophical traditions. It is a spiritual concept and often considered as a metaphor of a tree that has roots, trunk, branches, and fruits. The six branches are:

Raja means royal, as it is the best form of all. This is also known as Classical Yoga. As defined in Sutra by Patanjali that it is based on the eight-limbed path towards self-realization.

Bhakti means devotion. It emphasizes love, accepts, and tolerate everyone. Bhakti is the path of devotion and a positive way to connect God. It is considered the union of the heart.

Jnana means wisdom. It is the union of the mind. It is the knowing yourself and inquire deeply. This is considered as the most difficult form among all.

Karma is action. The philosophy of Karma is what we are going through today is the result of our past actions. It is the path of selfless service and the yogis of this branch devote themselves to other’s betterment.

Tantra means expansion. Usually, this form is misinterpreted. is a path of rituals and balancing male and female energies in one’s life.

Hatha means force. This form teaches to maintain the balance of simultaneously two opposite nature like sun and moon in our body. It uses the physical body to change the mind.

Health benefits of Yoga are a fundamental way to keep yourself sound. In this pandemic, you can stay at home and practice it that will keep you safe and fit. Some of its benefits are:

Benefits of Yoga in the context of materialism and spiritualism perspective paves the way to understand not only ‘the self’ but also make able to establish ‘union’ with the Supreme One. It can cease suffering and pain and creates a balance between the physical, material, and spiritual world.