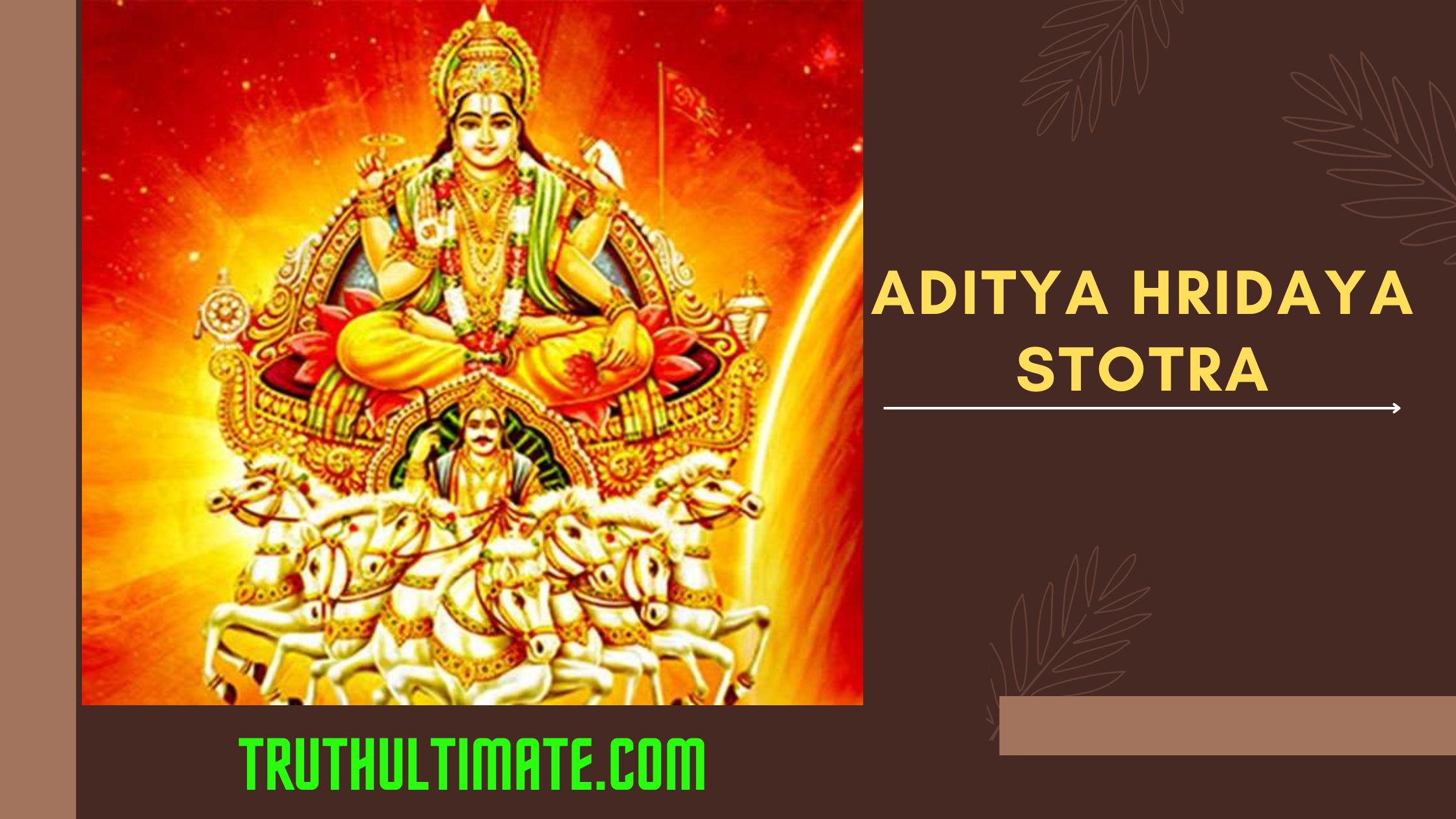 Dedicated to the Sun God (or Surya Dev), the Aditya Hridaya Stotra is one of the most powerful hymns that humans can recite, especially during tough times.

Aditya Hridaya Stotra, the powerful stotra finds a mention in the Yuddha Kanda of Ramayana, written by Sage Valmiki.

It is said that Sage Agastya recited this hymn to Lord Rama just before he waged a war against Ravana for having abducted his beloved wife, Goddess Sita.

Before the war started between Lord Rama and Ravana, Shri Rama was restless and spent many nights worrying about Sita.

Therefore, there was a need to calm Lord Rama and make him physically and mentally prepared to take on the enemy on the battlefield.

The Aditya Hridaya Stotra is available in many languages, including Hindi.

Composed by Sage Agastya, when you recite the Aditya Hridaya Stotra in Hindi, you can be sure of reaping rewards almost instantly. You should recite this stotra in the morning, especially on Sundays.

The Aditya Hridaya Stotra in Sanskrit is a hymn dedicated to the Sun god and can be seen in the sarga 105 of Valmiki Ramayana.

According to Sage Valmiki, the stotra in Sanskrit is older than the epic itself. The stotra which is a part of the Yuddha Khanda comprises 31 shlokas.

It is believed that one who recites this hymn regularly, he/she will be blessed by the Sun god and all the wishes will come true.

There are plenty of benefits one can look forward to in reciting the Aditya Hridaya Stotra regularly. Some of them include:

How to Read Aditya Hridaya Stotra?

Ideally, the Aditya Hridaya Stotra can be read daily in the morning, during sunrise. However, make sure that you do not consume meat and liquor on the day you recite this stotra.

Also, make sure you do not have any salt and grains on Sunday, especially when you decide to recite this mantra.

If you decide to recite the Stotra on Sundays, then observe celibacy on those days. This is extremely important for one to follow.

Also, it is a good idea to wake up early in the morning and offer water to the Sun God or Surya Dev and recite the holy Stotra.

While you are offering water to God, make sure you are standing in the opposite direction. This should be followed while you are reciting the hymn and offering the Arghya.

When you are done with the recitation, continue to pray to the Sun God for a few more minutes with a calm mind.

The Aditya Hridaya Stotra was composed and written by Sage Valmiki in Ramayana.

However, the stotra was first recited by Sage Agastya to Lord Rama just before the war broke out between the Lord and Ravana.

When to Read Aditya Hridaya Stotra?

Though there is no right time to read this holy Stotra, it is suggested that you read it on Sunday as it is the day dedicated to the Surya Dev.

When you recite the stotra on this day in the morning, it is believed that you will get his blessings. The preferable time is at sunrise or within a few minutes of sunrise.

The song Aditya Hridayam was sung by Sage Agastya, just before the war between Lord Rama and Ravana broke out.

Is Aditya Hridayam part of Ramayana?

The Aditya Hridayam stotra is a part of Ramayana. It can be seen in the sarga 105 of Yuddha Kanda of this Hindu epic, written by Sage Valmiki.