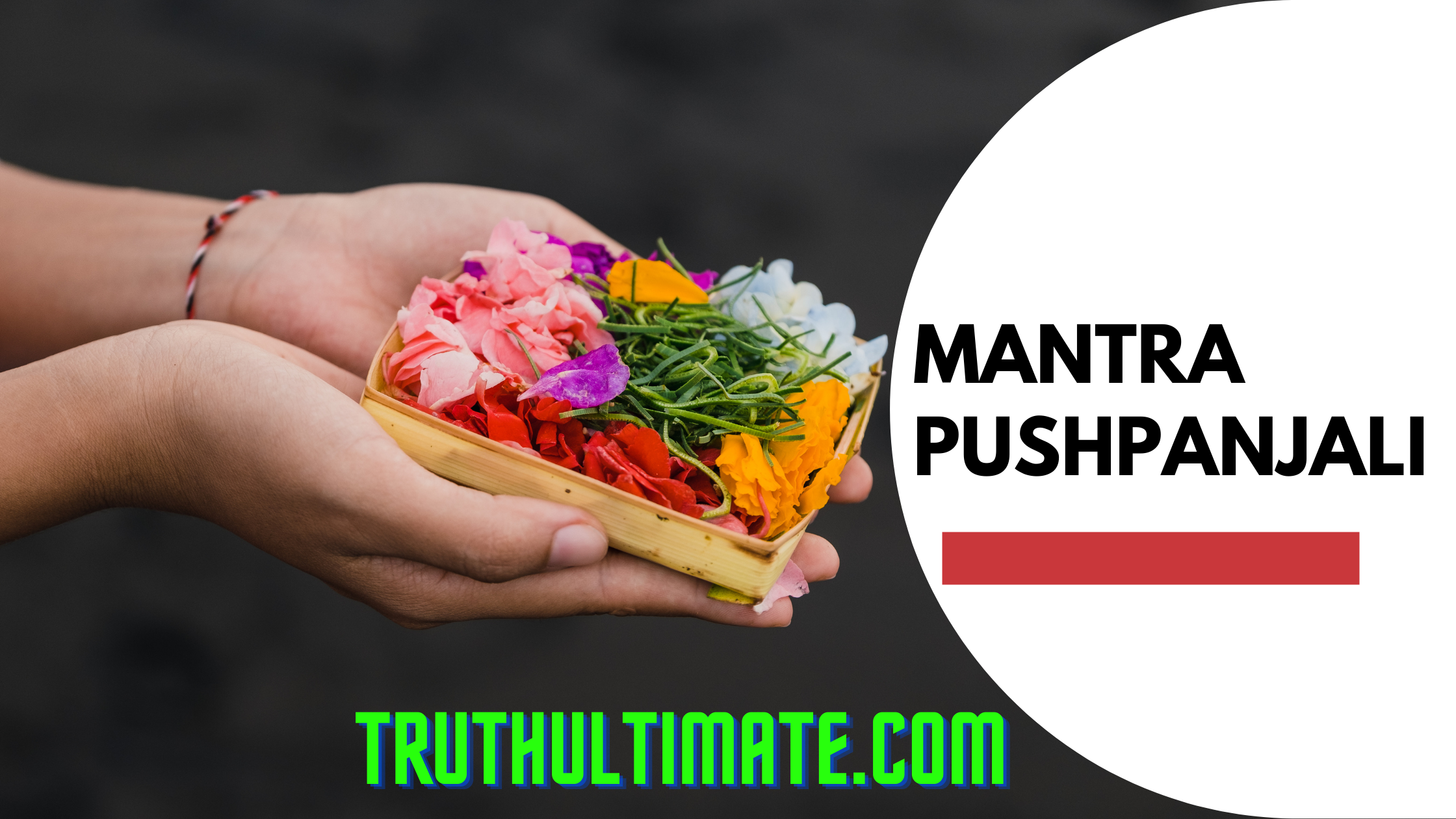 After any prayer or pujas, Mantra Pushpanjali is generally chanted. A majority of Pushpanjali mantras can be used for all deities.

However, there are Pushpanjali mantras that are dedicated to specific gods. These mantras can be recited when a puja or a prayer get over.

Mantra Pushpanjali is rendered when the camphor is waved off, and all the remaining procedures of puja are concluded.

There is a specific manner in which the Mantra Pushpanjali in Sanskrit has to be rendered.

Mantra Pushpanjali is made up of three specific words-Mantra, Pushpa means flowers, and Anjali means the folded hand.

This mantra pushpanjali is a kind of great Sankalp or resolution withholding the flowers in folded hands.

After the mantra is over, the flowers have to be offered to God or the deity. Pushpanjali Mantra is meaningful and highly symbolic.

The essence of this mantra is to pray before the main deity after the course of prayer or puja and seek lots of blessings in return.

This powerful and auspicious is chanted to help devotees get the desired results of any worship or puja.

Therefore, it is advisable to practice well and learn the pronunciation of the purohits before you chant the mantras.

The Mantra Pushpanjali in Sanskrit can be divided into four sections, with each section having a distinctive meaning.

It is only after the Mantra Pushpanjali is offered to the Lord; the religious ceremonies are considered to be completed.

Check out the Mantra Pushpanjali lyrics below and their meaning:

Meaning: A puja was performed by the demigods for Prajapati in the form of a yagna.

For worship, this yagna is one of the earliest forms of showing respect to Prajapati.

Worshippers attain glory (greatness) at the place where yagnas are performed.

Meaning: The great emperor Kuber, I bow before you and greet you warmly for you turned everything in a favourable way. Oh, all giving Kuber, may all my wishes be fulfilled.

Meaning: Let our country be democratic and be a welfare state. Be it a country that has all the things one can consume.

Let us have all the control over our country. Allow my country to be free from unconsciousness and greed.

Let my country have a long life and be a united state till the ocean. Till the end of this world, let my country be safe.

Meaning: For this reason, our country is great and there is a mantra (shlok) dedicated to it.

I aspire to live in a country that has people representing the state council of Maruti.

This is my universal prayer that makes everyone realize the prominence of strength, aspiration, and welfare of the world.

There are many paths one can take to understand the ultimate truth. However, all these paths mean the same.

A country can be sovereign and omnipotent when there is a feeling of unity, harmony, and tolerance.

Through sacrifice, the Gods accomplished their sacrifice: these were the earliest ordinances. These Mighty Ones attained the height of heaven, there where the Sādhyas, Gods of old, are dwelling.

Universal sovereignty, enjoyment of pleasures, independence, distinguished distinction as a king, the fulfillment of the strongest desires, the position of a king, of a great king, and supreme mastership, that he might cross (with his arms) the universe, and become the ruler of the whole earth during all his life, which may last for an infinitely long time, that he might be the sole king of the world up to its shores bordering on the ocean.

Regarding this event, the following Stotra chanted The Maruts resided as the distributors of food in the house of Marutta, the son of Avikshit, who had fulfilled all his desires; all the gods were present at the gathering.

Procedure to be followed while reciting Mantra Pushpanjali

To get the desired results from chanting Mantra Pushpanjali in Sanskrit, the devotee, while in full concentration, must remain in a standing position while holding the flowers in their closed palms.

Once you start reciting the mantra while holding the flowers in hand, concentrate on the meaning of the mantra and see the deity throughout.

Once you’ve completed chanting the Mantra Pushpanjali in Sanskrit, you can offer the flowers to the deity.

You need to understand this gracious mantra meaningfully to get the required results.

Mantra Pushpanjali benefits can vary a lot, depending on the deity to which it is performed.

For example, when this mantra is offered to Santhana Gopala, devotees will be blessed with good children.

Aayur Sooktha Pushpanjali is chanted to gain longevity of life and good health.

This mantra also bestows devotees with immortality. To gain success in life, you need to recite the Narayana Sooktha Pushpanjali Mantra.

For students in schools and colleges, Vidya Rajagopala Mantra Pushpanjali will benefit a lot. Why?

Chanting this mantra regularly and with devotion will guarantee students’ success in education.

Children are expected to get enhanced memory power and knowledge. Also, they’ll have improved grasping power.

Children will start exploring hidden talents and will start pursuing their dreams after chanting this mantra.

Similarly, if you’re dealing with unnecessary delays or obstacles in marriage, then reciting Swayamvara Mantra Pushpanjali is beneficial.

Whatever problems you’ve been facing with regards to the marriage will be solved by chanting this mantra.

You can finally go on with the marriage proceedings without worrying about anything.

If you want to conquer your enemies and put an end to their dangers, then chanting the Purusha Sooktha Pushpanjali Mantra is the way to go.

This mantra has the power to grant victories over your enemies.

Aikamathya Sooktha Pushpanjali Mantra grants you benefits related to building and promoting understanding and relationships within the family.

To get a cure for diseases and improve your physical and mental strength, you need to recite Sarvarogasamana Mantra Pushpanjali regularly.

All of this holy mantra in Sanskrit is unique and grants you benefits that are different from one another.

However, the general benefit is to enrich one’s life and understand the reason behind living.

So, depending on your wishes, you should consider chanting the mantra whilst following all the steps with full devotion.