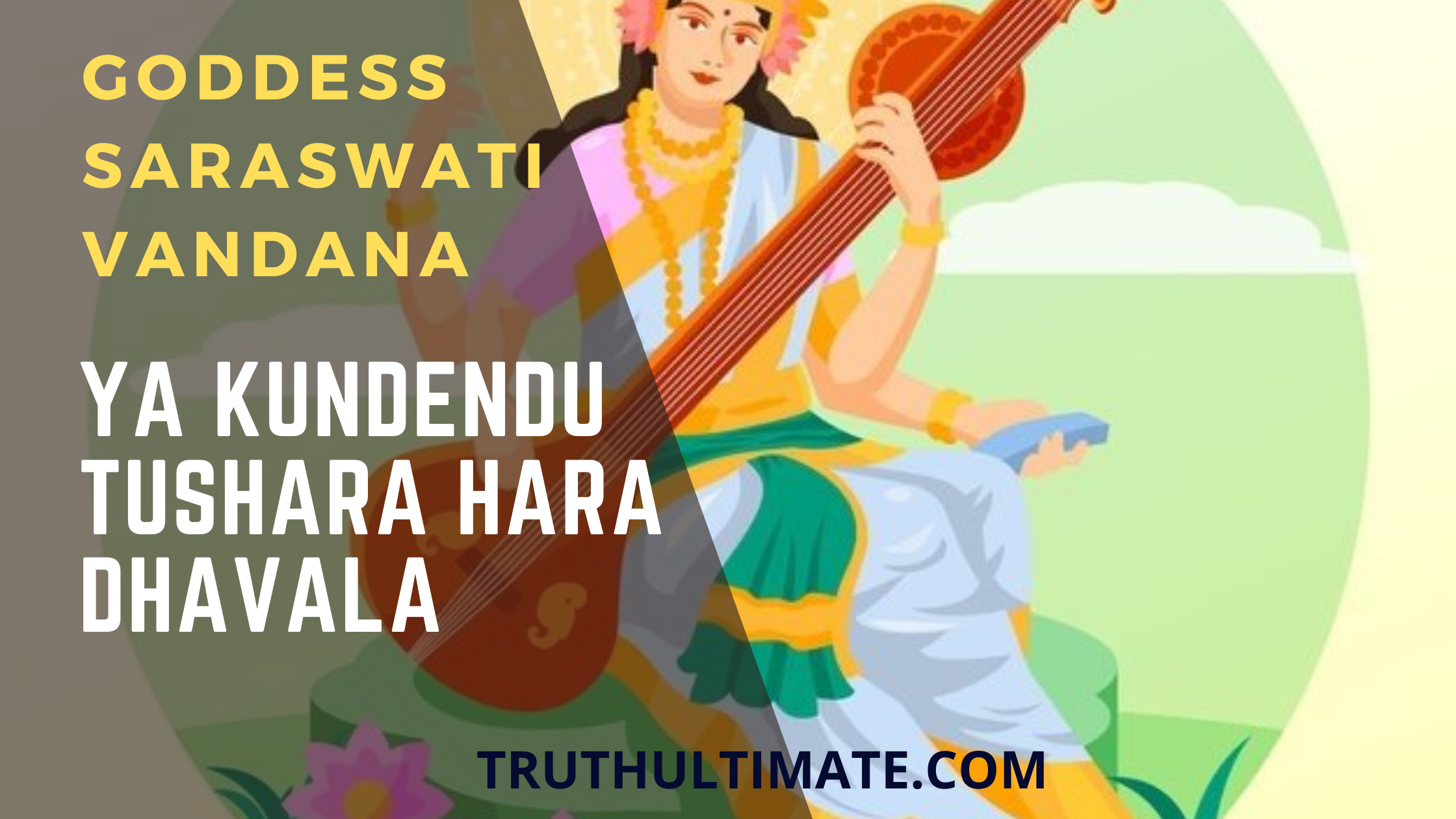 Saraswati Vandana or Ya Kundendu Tushara Hara Dhvala is a significantly important chant for attaining knowledge and wisdom by the grace of Goddess Saraswati.

This mantra is an intrinsic part of the prayer session chanting in many educational institutions.

The Saraswati Vandana is a common chanting before the start of debate forums, meetings, conferences, and spiritual gatherings.

The Saraswati Vandana often helps us in increasing our consciousness and awareness about our culture.

Spiritual guidance is really important for paving our paths in the right way and right direction.

The regular chanting of the mantra do this; they create awareness about how to do certain things in our life.

In Hinduism, we have so many Vandanas and mantras that we can chant to get the blessings of God and Goddesses in the mundane matters of our life.

You may have noticed that before any auspicious event of our life, our elders always recommend us to chant mantras for getting the blessings.

But, that’s not all if we consider the benefits of the mantra, as the mantras help us with our physical and psychological being as well.

Our concentration, focus, our physical well-being in terms of heart rate and others are very much improved.

It really brings a big difference in your life if you make it a regular thing.

Ya Kundendu Tushara Hara Dhvala or the Sarasvati Vandana is very important and is often a part of morning chants for attaining knowledge and wisdom.

Goddess Saraswati is the wife of Brahma, and in Hinduism, she has a very important place.

Those who follow Hinduism bestows the Goddess with grace in the form of different mantras.

But, this mantra specifically is a very powerful one and is very easy to learn. Hence, you can start the day by listening or reciting whatever is feasible.

Moreover, this mantra can help you grow spiritually as well.

This mantra is really important as it pays respect and homage to the Goddess Saraswati.

The literal translation of the mantra states the qualities of the Goddess Saraswati and asks her to remove the ignorance around the chanters.

Just as the first sloka states she is adored by almost everyone even the Lord Brahma, Lord Vishnu, and other Lords, so why shouldn’t we pay respect to her?

For the knowledge and wisdom, she is the solution to every problem.

Hence, chanting her name, describing her qualities, and attaining wisdom, knowledge, and the art of learning.

As we know that Goddess Saraswati is the Goddess of Knowledge, Arts, Beauty, Music, and Truth, she is represented by a lovely woman with four hands riding a white swan among water lilies to remind humanity that science is like a beautiful woman.

A palm leaf, a lontar (a Balinese traditional book that is the source of science or knowledge), a chain symbolizing that knowledge is never-ending and has an everlasting life cycle.

And a musical instrument (guitar or veena) symbolizing that science develops through the growth of culture are all held in her hands.

For Balinese, the Lotus flower is the holiest. This mantra symbolizes exactly this.

Here is the Sanskrit of Sloka of the Sarasvati Vandana.

“Salutations to Devi Saraswati, Who is pure white like Jasmine, with the coolness of Moon, the brightness of Snow and shine like the garland of Pearls; and Who is covered with pure white garments, Whose hands are adorned with Veena (a stringed musical instrument) and the boon-giving staff; and Who is seated on pure white Lotus, Who is always adored by Lord Brahma, Lord Acyuta (Lord Vishnu), Lord Shankara and other Devas, O Goddess Saraswati, please protect me and remove my ignorance completely.”

Here are the lyrics of Sarasvati Vandana ya Kundendu Tushara Hara Dhvala written by sage Agasthya.

She is the one who is wearing the beautiful white jasmine flower garland.

She is the one who always dresses in spotless clothes.

She is the one holding a Veena, which she is playing.

She is the one who sits on the white lotus throne.

She is worshipped by Gods such as Brahma, Vishnu, and Shiva.

And please look after me, Goddess Saraswathi, who eliminates ignorance.

Let that Goddess of words, she who has four hands has her way,

She who holds the crystal bead garland in one hand,

And she, who is as gleaming as Kunda flowers, moon, conch, and crystal beads, lives in my face and blesses me at all times.

Let Saraswati, whose feet are worshipped by asuras and devas, have her way.

She is holding a very appealing book in her hands.

She, who is Brahma’s wife and sits on a lotus, always dances on my words.

Oh, Saraswati, the water-born Goddess who glows like saffron,

She who does penance and prefers to sit on an open lotus,

And she who has control over the mind, please become my boon-giver.

I honor Goddess Saraswati, who bestows blessings and takes whatever forms she desires.

I’m starting my learning; please always allow me to succeed in this endeavor.

I deeply respect Goddess Saraswati, the Goddess of all Goddesses,

She who carries the moon and is the ultimate expression of peace,

And she, the lord of all Yoga, whom I salute again and again.

Salutations to her, who is always cheerful, has no foundation and is free of stains.

Salutations to her, the foundation of knowledge, has wide eyes and is true wisdom,

Salutations to the one with a microform and whose form is like a clear crystal,

Salutations to God’s voice, who has four hands and all successes.

Salutations to her, who has pearls all over her body and is the foundation.

Salutations to her, who is the root power and has the form of the root mantras.

Salutations to her who is divine, a powerful yogi, and a word goddess.

Salutations to the Goddess of sound, who blesses and blesses with her hand.

Salutations to the Goddess of Knowledge, who takes the form of a Vedic goddess and is mentioned in the Vedas.

Salutations to the Goddess who is the light of good and distinguishes between good and evil.

Salutations to the Goddess of all wisdom, who is ever full of happiness and manifests herself in various forms.

Salutations to the all-knowing, all-encompassing being who is truly happy and everything.

Salutations to the Goddess Lakshmi, who takes the form of Yoga and is the source of Yoga’s joy.

Salutations to her who possesses divine wisdom. She has three eyes and maintains an angelic form.

Salutations to her who is half-moon shaped and wears a half-moon.

Salutations to her who is equal to the Sun and the Moon, and who wears the moon as a decoration.

Salutations to her who has the shape of an atom, a large firm, and a universe form.

Salutations to her who possesses the eight occult powers and manifests herself in the form of joy.

Salutations to her, who is the perfect embodiment of knowledge and has the form of wisdom and science.

Salutations to her, who takes on the forms of various shastras and has a wide range of appearances.

Salutations to her, who is a lotus, a member of the lotus clan, and has the appearance of a lotus.

Salutations to the primary Goddess, who takes on a divine form and cleanses the world of sins.

Salutations to the great Goddess, Kali, and Lakshmi.

Salutations to the lady of Brahma, who Brahma, Vishnu, and Shiva have praised.

Salutations to her who lives in a grove of lotuses and can take on any form she desires.

Salutations to Lord Brahma’s wife, who is skilled in her work.

A person who reads it every morning and evening will gain mystic powers in a short span of duration.

The Saraswati Vandana is a respected Hindu mantra known for bringing knowledge, and insight to those who pray it.

In the spheres of education and the arts, Saraswati is the supreme authority. As a result, everyone who observes Hinduism prays to her for advice and encouragement, from artists to scientists.

Saraswati worshippers chant the Saraswati Vandana Mantra every morning as a form of respect to their patron goddess.

Everyone has their version of the Vandana, which is a Goddess-directed prayer. But, the popular one is the sage Agasthya one which we described earlier.

Sarasvati Vandana is often chanted regularly by everyone, but more importantly, it is chanted by scholars, teachers, and students, or anyone who is seeking knowledge, wisdom, and learning.

Vag Devi is the name given to Mother Saraswati (Goddess of speech). Lord Brahma, the master of all cosmic knowledge and wisdom, is supposed to have her sitting in his tongue.

Mother Saraswati is a goddess of learning who is honored at all educational institutions and organizations that teach and practice visual, performing, and fine arts.

Chanting the Saraswati Vandana regularly might help to clarify ideas, strengthen willpower, and increase the power of self-determination, also known as vairagya or a sense of detachment.

The Saraswati Vandana has the power to remove ignorance and aid in the rapid mastery of all that has been learned.

It can instill in the hearts of the chanters the true purpose of life and bind them securely in their pursuit of spiritual growth.

For school-aged youngsters, students, and learners the Saraswati Vandana is highly recommended.

Chanting the Saraswati Vandana regularly can assist them in better understanding the subjects and achieving higher grades.

It can considerably improve concentration and aid in focusing on what is being learned without diversion or digression.

Memory development, refinement of knowledge and abilities, and clarity of expression are some of the immediate benefits of Saraswati Mantra.

Saraswati Mantra can be extremely beneficial to professional speakers, singers, and performers.

The full advantages of this mantra can be reaped by chanting it every day, especially at dawn and sunset, after taking a clean bath and sitting in a tranquil atmosphere.