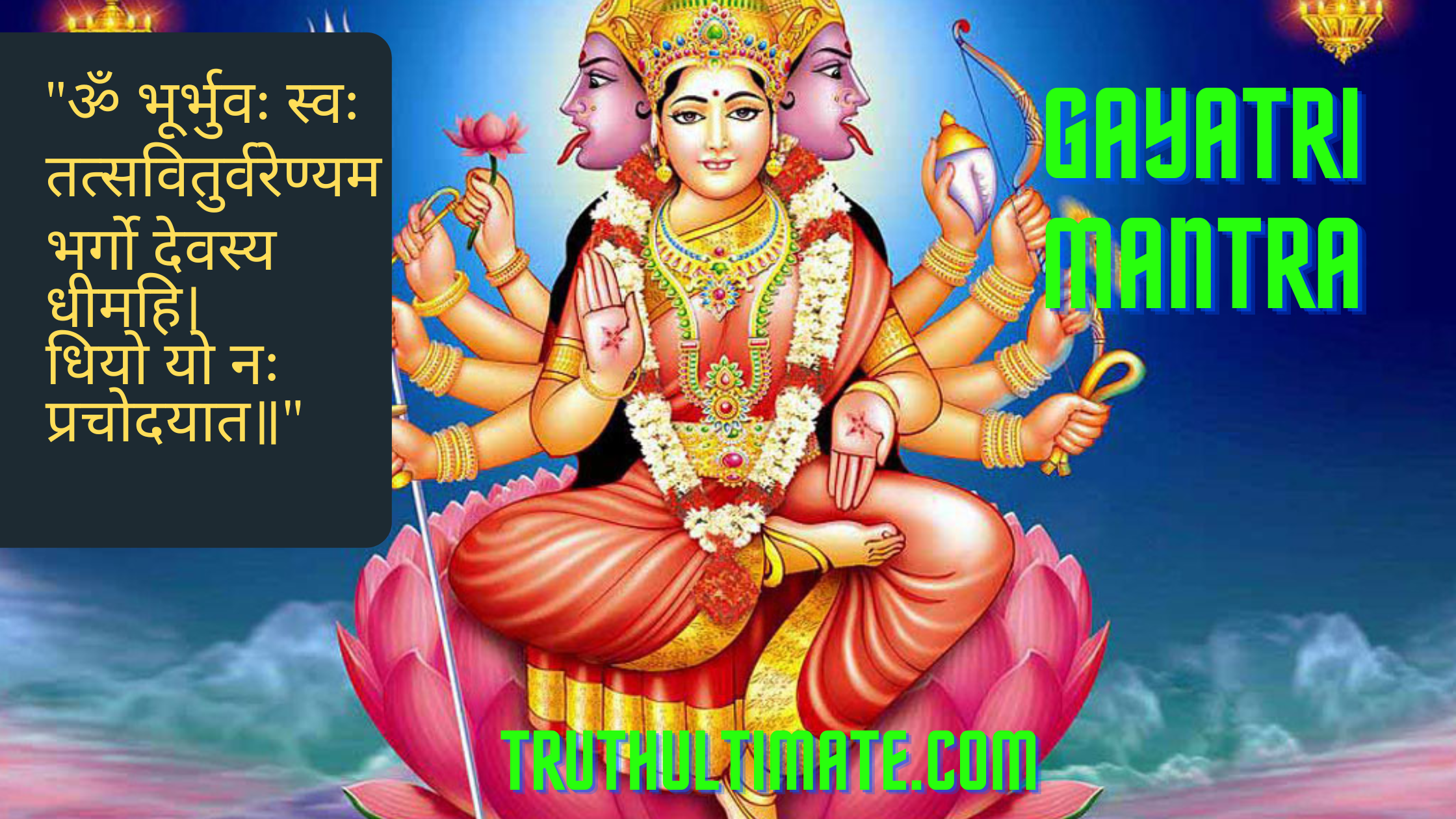 Om Bhur Bhuva Swaha, popularly known as the ‘Gayatri Mantra’ is the most sacred and considered as the “mother of all mantras.”

Among the many universal mantras in Hinduism that evoke our spiritual guidance and relation, the Gayatri mantra is one of the most important ones.

Om Bhur Bhuva Swaha is one of those mantras that are very popular among the Hindus even if you don’t know what it is, what is the significance behind it, and what it means, you have listened to it at least one time.

So, let’s dig into the meaning and lyrics of the Gayatri mantra. Furthermore, chanting the mantra itself has so many benefits, and if it’s a Gayatri mantra the benefits are doubled.

Even though, the mantra is more than just a string of words. When properly pronounced, the mantra, which is filled with immense strength, brings out the divine power in man.

The vibrations produced by reciting the mantra, when combined with the cosmic nada in the Universe, form Universal Consciousness.

These cosmic vibrations are what gave birth to the Veda (sacred revelations of spiritual knowledge).

Om bhur Bhuva Swaha, or precisely the Gayatri mantra is a very sacred yet most popular chant in Hinduism.

Om Bhur Bhuva Swaha exemplifies the oneness that underpins creation’s diversity. It is only by recognizing this commonality that we can comprehend diversity.

Clay is one and the same material, yet it can be used to make pots of all forms and sizes. Gold is one, though gold jewelry comes in a variety of shapes and sizes.

The Atma is one, even if there are various embodied forms in which it can be found. The milk is always white, regardless of the color of the cow.

Om Bhur Bhuva Swaha mantra is a very good example of this and demonstrates the diversity yet the oneness in our mankind.

We all are different in physical forms but what connects us is the spiritual relation and humanity.

What is the Gayatri mantra?

The Gayatri Mantra is popularly known as the “Mother of All Mantras.” Gayatri Mata (Mother Gayatri) is also known as the Veda Mata, or the embodiment of the Vedic Universe.

Because the Vedas are timeless and believed not written by humans, they are referred to as Apaurusheya. This mantra can be thought of as a summation of the Vedas.

As a result, reciting the Gayatri mantra provides all of the benefits of chanting all of the Vedas.

“Gayan Trayate iti Gayatri,” a popular phrase on Gayatri Mantra, means those who chant the mantra, are protected.

It’s something that all religions have in common. It refers to the supreme principle that generates, sustains, and dissolves the cosmos as single absolute energy or deity, or whatever we want to call it.

The Mother of all Scriptures is Gayatri (Vedas). Wherever Her name is spoken, She is present. She is a formidable opponent. Gayatri is the One who nourishes each individual being.

Anyone who worships Her receives pure emotions. She is the personification of all the Goddesses.

Gayatri is our very breath, Gayatri is our faith in existence. Gayatri has five faces, each of which represents one of the five life principles.

Mother Gayatri preserves and protects all living things, as well as directs our senses on the right path. ‘Dhmahi’ is the Sanskrit word for meditation.

We ask her to instill good intelligence in us. We implore her to give us whatever we require.

As a result, Gayatri is an all-encompassing prayer for protection, nutrition, and, ultimately, liberation.

The Gayatri Mantra gets its first impression in the Rig Veda (Mandala 3.62.10), early Vedic literature published around 1100 BCE.

It is described as a key rite in the Upanishads and as the Divine poem in the Bhagavad Gita. It is firmly believed that chanting Om Bhur Bhuva Swaha mantra solidifies the mind.

If people keep on with their lives and do the task that is destined for them, their lives would be full of joy and happiness.

our hearts are filled with darkness.

distant from us and

Meaning of The First Letter “OM”

Because the sound of ‘Om’ or ‘AUM’ emanates from the Prana (Vital Vibration), which senses the Universe, it is also known as Pranav.

It’s the totality and substance of all the words that can come out of a human throat.

It is the Universal Absolute’s primal fundamental sound symbol.

Vyahrities are the first three words of the Gayatri, which literally mean “past,” “now,” and “future.”

Vyahriti is the knowledge of the entire cosmos, also known as “ahriti.”

Thus, the one who chants these three words considers the Glory of God that illuminates the three worlds or regions of experience.

Here are the meanings of the remaining words of the mantra.

Tat – In simpler terms, it means “that”, because it stated description through speech or language, the “Ultimate Reality.”

The last five words in the Gayatri mantra finalize the prayer for final liberation through the awakening of our true intelligence.

Also, there are various meanings of the words used in the Gayatri mantra.

We meditate on that most adored Supreme Lord, the creator, whose effulgence (divine light) illumines all realms (physical, mental and spiritual). May this divine light illumine our intellect.

One can become aware of the inner propelling force of the five elements, the five vital breaths of air in the human body, and the five sheaths that enclose the Atma by meditating on the Gayatri.

These three karaas, or instruments, must be purified and sublimated for man to achieve his life’s aim.

This huge work can be accomplished by reciting the Gayatri mantra and meditating on it.

It will keep you safe wherever you are: on the road, at work, or at home.

Westerners have studied the vibrations created by this mantra and discovered that when it is said correctly, as prescribed by the Vedas, the atmosphere around it becomes visibly illuminated.

Also, towards the end, repeat Shanti three times, as this will bring Shanti (peace) to three entities in you: body, mind, and soul.

At least three times a day, in the morning, noon, and evening, say the Gayatri mantra. This will help to mitigate the consequences of one’s daily wrongdoings.

Because each day’s karma (activity) is atoned for that day by repeating the Gayatri mantra, there is no accumulation of karmic (action) debt.

Now, let’s look at the benefits of the Gayatri mantra.

The Gayatri Mantra’s enchantment works on people who dedicate themselves to it, and one of its first benefits is that it calms the mind.

Simply saying Om can have a calming effect on your mind, so you can imagine what the mantra might do for your restless spirit.

It actually produces a lot of pleasant hormones, such as serotonin, which makes you feel cheerful and optimistic.

Breathing is a highly important exercise in and of itself, and those who do it correctly can enjoy health advantages.

Reciting the Gayatri mantra instills positivity in you, which then calms you down, allowing you to develop a breathing pattern.

When saying the Gayatri mantra, you can acquire this deep controlled breathing style.

The Gayatri Mantra helps to eliminate all anxieties and sicknesses while also increasing happiness, riches, and prosperity.

One of the benefits of saying the Gayatri mantra is that it helps people feel less depressed.

Of course, it’s natural to be able to lessen depression and stay joyful when you’re soothing your mind and bringing positivity into your life.

The vagus nerve, which is stimulated to cure depression, is discovered to vibrate spontaneously when the mantra is spoken.

It sharpens the mind and clears mental stumbling blocks. It endows followers with the ability to make sound judgments and conclusions.

Another major advantage of the Gayatri mantra is that it might help you improve your concentration and memory.

The vibration created by reciting this mantra is directly beneficial to your brain, eyes, sinuses, and lower head because it works on the three chakras of your body.

With this strong chant, your concentration and memory will undoubtedly increase.

The Gayatri Mantra improves one’s ability to concentrate and study, allowing youngsters to excel in their academics and elders to shine in their careers.

Having a happy marriage life

Reciting the Gayatri mantra can help you maintain a healthy relationship.

According to astrology, marriages are doomed owing to unfavorable star alignments. With the grace of Goddess Gayatri, this can be changed.

Gayatri Mantra promotes spiritual maturity and aids in the ascension of the individual up the spiritual ladder of illumination.

Chanting the mantra permits important spots in your skin to stimulate blood circulation, which subsequently helps to eliminate toxins from your skin.

The chanting of the mantra has a great effect on the face, and you may notice favorable outcomes as oxygenated blood is transferred through your skin nerves, making you look younger.

Goddess Gayatri is a manifestation of Annapoorna, the goddess of food, according to Hindu mythology.

With the recitation of the Gayatri mantra, you may steer your life in the direction of happiness and positivity.

Other Benefits of Gayatri Mantra