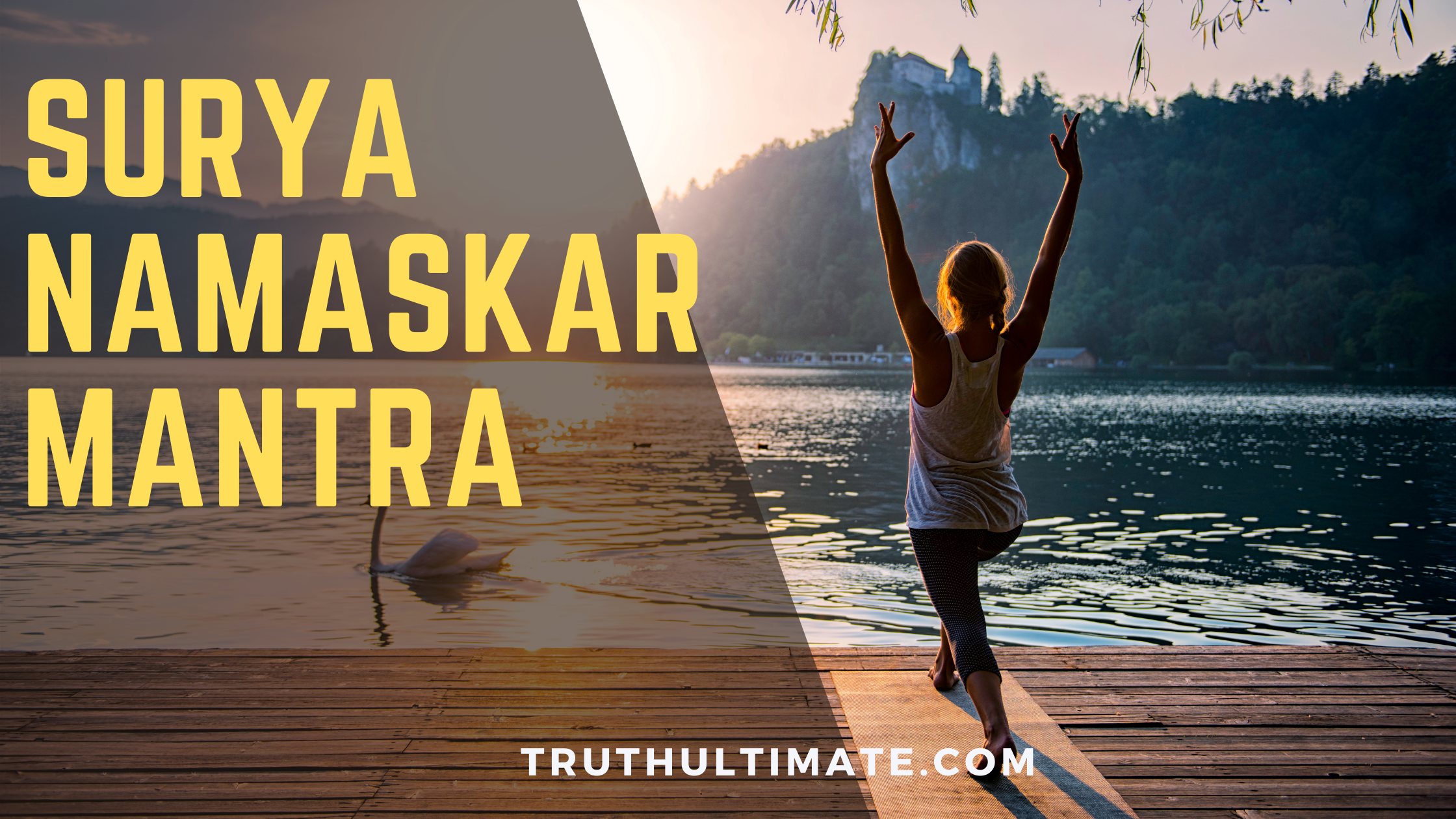 It consists of twelve yoga postures or asanas that represent the sun’s cycles, which last about twelve and a quarter years.

Your cycle will be in sync with the solar cycle if your system is revitalized. The Surya Namaskar assists in achieving this balance between your bodily and solar cycles.

Surya Namaskar may be accompanied by Sun Salutation Mantras. These chants bring harmony to the body, mind, and breath.

The advantages increase as the practice progresses. When sung with earnest gratitude, these mantras can elevate the spiritual level of the practice.

The sun keeps life on the planet alive. Our forefathers recognized this and revered the Sun.

It is well-known because eminent yogis refer to it as the “King of Yoga.”

Surya Namaskar is a method of combining the twelve asanas in a yoga sequence in a very systematic manner.

Surya Namaskara is a salutation to Lord Surya (The Sun), the world’s source of energy, for self-vitalization.

In the scriptures, there is a lovely regular routine of exercise, prayer, and worship. Surya Namaskara should be done before sunrise.

The practice of Surya Namaskara asanas and mantras has a legendary origin.

Anjana, Hanuman’s mother, desired that her son receive an education from Lord Surya (the Sun).

She asked Hanuman to approach Lord Surya and request that he teach him.

Lord Surya was approached by Hanuman, who pleaded that he accepts him as a student.

Surya, on the other hand, refused to teach Hanuman. Surya decided to instruct Hanuman after considerable coaxing.

Surya was astounded to learn that the mighty Hanuman had mastered all of the Vedas in just one week!

Hanuman inquired at the end of the class what he might give back to his guru as a reward.

Surya turned down Hanuman’s offer of a reward. He claimed that just having Hanuman as a pupil was a reward in and of itself.

Furthermore, Hanuman stated, “I can only offer you my thanks and namaskars (respectful greetings) as Guru Dakshina.”

In front of his guru, Lord Hanuman bowed down. Lord Surya was overjoyed and bestowed a blessing to Hanuman.

As a mark of respect for his guru, Hanuman began to teach the Surya Namaskar. He put it into practice on a daily basis.

The Surya Namaskar is also credited with keeping Lord Hanuman in perfect health. Lord Hanuman became a symbol of power as a result of it.

The occurrence is also thought to be the start of Surya Namaskara practice. In hatha yoga, it is the foundation of asanas.

Here are the lyrics of the Surya Namskar Mantra with their meanings and translation.

I bow to the One who is a friend to all

I bow to the One who always shines radiantly

I bow to the One who dispels ignorance

I bow to the One who illuminates the entire Universe

I bow to the One who illuminates the entire Universe

I bow to the all-pervading One

I bow to the One who is golden colored

I bow to the One who gives light with infinite rays

I bow to the son of Aditi, the cosmic divine mother

I bow to the One who is responsible for life

I bow to the Giver of wisdom and cosmic illumination

Here are the 12 Surya Namaskar mantras with their significance.

One who is friendly to all.

The posture helps in maintaining the balance of the body.

Also, it works to relax the nervous system.

The shining or the radiant one.

The dispeller of darkness, is responsible for generating activity.

One who illuminates or the bright one.

All-pervading one, one who moves through the sky.

Giver of nourishment and fulfillment.

One who has a golden-colored brilliance.

Giver of light with infinite rays.

The son of Aditi, the cosmic divine mother.

One who is responsible for life.

One who is worthy of praise and glory.

Giver of wisdom and cosmic illumination.

Surya Namaskar is a mantra that invokes the Sun God and requests his blessings for long and healthy life.

The best results come from listening to or chanting this mantra while doing yoga.

The following are the advantages of each of the Surya Namaskar mantra’s separate mantras.

The Om Mitraaya Namaha mantra, combined with the Pranasana stance, is beneficial for body and mind balance.

It is beneficial to have healthy lungs and to breathe by chanting the Om Ravaye Namaha mantra while in the Hasta Uttasana stance.

The Om Suryana Namaha chant, along with the Pada Hastana stance, helps to stretch and strengthen the hips, shoulders, and arms.

It is beneficial for indigestion and bowel movements to chant the Om Bhaanave Namaha while in the Ashwa Sanchalanasana stance.

The Om Khagaya Namaha mantra, chanted while in Dandasana, strengthens the upper body while also soothing the mind.

The Om Pooshne Namaha mantra, combined with the Ashtanga Namaskara stance, helps to relieve tension and anxiety while also strengthening the back and spine.

Body strength and flexibility are improved by chanting the Om Hiranya Garbhaya Namaha while in the Bhujangasana stance.

The Om Savitri Namaha mantra, chanted while in Hatapadasana, expands the hips, shoulders, and arms.

Body aches and pains are relieved by chanting the Om Bhaskaraya Namaha mantra while in Tadasana.

How to remember surya namaskar mantra?

Many people struggle to recall all of the Mantras and become perplexed while attempting to practice them.

Understanding the meaning mentioned above is the simplest approach to recalling all of the mantras in the correct order.

All of the meanings are connected to the posture, so once you begin to connect the poses to your body and the goal, you will naturally recite it.

If you’re still having trouble, print this Surya Namaskar Mantra Lyrics picture and stick it on the wall where you practice Asana.